But what’s missing from this picture? 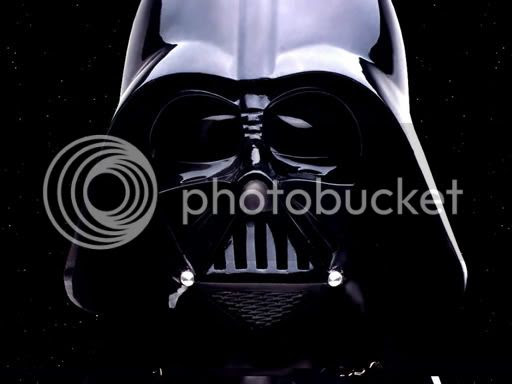 Ask anyone about his or her favorite aspect of STAR WARS and I guarantee at least all of them will mention Darth Vader. He’s an integral part of the story. Generally, people equate the STAR WARS saga with Darth Vader (and with good reason).

Here’s the breakdown as to why His Vaderness is so popular:

* The fashionable black uniform
* He’s a cyborg and a Jedi
* Insidious sense of humor
* He has a deep, dark secret
* That voice!
* He’s unapologetically evil, but…
* Experiences redemption

Darth Vader is not an admirable character because of his nefarious ambitions and acts. There is no excusing his abhorrent behavior.

However, he’s an admirable character in spite of those negative qualities, probably because Lucas layered him with relatable, accessible vulnerabilities. As a result, Darth Vader raised the standard for villains everywhere. He’s part Victor Von Doom, part Darkseid (wearing a samurai helmet no less).

But to belabor the obvious, STAR WARS is a film. And there are plenty of memorable villains in films and television shows.

What about the villains of science fiction romance books?

To be precise, I mean the current, evolving SFR sub-genre and futuristic romances. While I’ve enjoyed many of these books immensely, I feel that most have fallen short as far as the villains are concerned. If science fiction romance is going to make a name for itself, you must ask yourself one question:

What would Darth Vader do?

What am I looking for exactly? Diabolical, heinous, ruthless—those are just a few of the words that should spring to mind while encountering the exploits of a science fiction romance villain. Yet he or she should also harbor fascinating personality quirks such as a vivacious charm, bizarre habits, or a dark sense of humor.

Not into villains with an acerbic wit? No problem—they can be full of angst and layered with enough sympathy and relatable motives to make you forget for whom you’re rooting at times. No matter how authors construct villains, these characters should make not only a fashion statement, but also a statement about human nature.

My concern with the current crop is that they are much too tame and/or two-dimensional. Other times I’ve found them to be frustratingly vague creatures. I’m often told that the villain is to be feared rather than experiencing visceral dread firsthand. Occasionally, I wonder if the villain is much more treacherous in the author’s mind than he/she is on the page.

So why does this aversion to truly extraordinary villains exist? For lots of reasons, I’m sure. Perhaps they’re too horrifying to either write or read about, or a reminder of the evil in our own world from which many readers want to escape for a few hours. Or maybe authors make a conscious decision to focus on other story aspects.

Whatever the reason(s), I’m calling for a reassessment of the issue. No one should try to mimic Darth Vader, but why not create villains of the Darth Vader mode? Why hold back and make it easy for the hero and heroine, not to mention the reader? If it serves the story, I say knock it out of the park solar system!

Here’s why authors should strongly consider what a few great villains could do for science fiction romance:

Don’t be stingy with conflict. Conflict is the heart of a great story whether it swings more toward SF or Romance. Multi-layered villains can drive conflict in so many ways. When Darth Vader invites Luke to join him, that scene is rife with conflict. The two are dueling, and Luke has to fight not only on a physical level but also on an emotional level. Then he has to somehow reconcile that he’s related to such a father.

Darth Vader is so corrupt that even loners like Han Solo can’t help but become involved in the war. Luke, Leia, and Han have that much more to overcome because of Darth Vader’s sheer malevolence. Without a riveting villain, the hero and heroine can’t reach their true potential.

Even if there’s no personified villain and conflict stems from interpersonal problems between the hero and heroine, please strive for realism. If they’re going to separate, make it a dang long time. If one or both threaten to break up, follow through on it. Avoid the conflict-sabotaging disconnects that occur when characters think one thing (“I can’t stand that arrogant bastard!”) but do another (hot kiss follows).

Rethink any villains that are nameless, faceless evils. Whether it’s military conglomerates, insidious government factions, The Blob, or whatever, handle these nebulous entities with care. If you must have them, give them a face and make that character work hard to earn the title of villain. Even a non-humanoid alien or some Lovecraftian monstrosity should be a complex, layered character.

In short: Let’s not forget or forgo the lessons of Aristotle’s POETICS or top points of Hegelian dialectics.

The Branding of a Genre

To accomplish all of this, dear authors, you’re going to have to make a few sacrifices changes and multitask like a mother.

For example, in exchange for a well-crafted villain and searing conflict, you’ll have to relinquish some of the space devoted to sexual tension and sex scenes. Yes, I know what your agents and editors are telling you, but too many books sacrifice conflict, plot, characterization, and potential villain jackpots for repetitive passages about a heroine’s lips or the hero’s hard body. Those are great when used judiciously, but they lose impact if that’s all there is to the story.

Readers can educate themselves beforehand if exciting conflict and villains aren’t their cuppa. I can understand that some people don’t care for high levels of intensity so I’m not calling for every SFR or futuristic romance to be like that—why waste anyone’s time? But unless sex/sexuality issues are integral to the plot, it can only take a romance so far.

Another angle would be to make passages do double or even triple duty (e.g., build characterization, conflict, and sexual tension all in one sentence). Symbolism, metaphors, and similes can deliver much with just a few words.

There are choices to be made if science fiction romance is to evolve and proliferate rather than just survive. You, the authors, get first crack at defining what will make SFR a must-read sub-genre. The goal is to create SFR stories that are more than just the sum of their parts (and interfacing body parts). Intriguing villains and bracing conflict are integral to that process.

If science fiction romance is going to distinguish itself, authors and readers can explore avenues such as breakout villains to give its reputation flair. There are so many options to explore. These characters can have a redemption arc. They can turn out to be the hero or heroine (within reason!).

And of course, they can be just plain twisted.

With the glut of Scorching Wicked Hot heat levels in romance books these days, what is something other than sex that can draw readers to SFR like flies to honey? We already have great heroes and heroines, worldbuilding, and adventures, so I propose adding a few great villains into the mix.

Wouldn’t it be great to have science fiction romance stories with villains so compelling that readers venture into new territory just to see what all the fuss is about? That’s what happened with STAR WARS. STAR TREK: THE WRATH OF KHAN is another example of what can be accomplished with a superbly crafted villain. 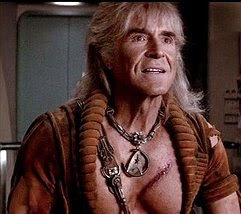 Now, of course there can’t and shouldn’t be a supervillain in every book—ho hum, boring. But where they lurk, they should lurk BIG. Make them cool. Make them provocative.

Make the villain a suave Svengali so irresistible that a reader won’t—or can’t—look away.