Hot off the press: ALIEN KISSES AND HOLIDAY WISHES, an SFR holiday themed anthology for your reading pleasure! It's currently available at Amazon at the pre-order price of $0.99. Releases December 1, 2015. Full story details below the cover. 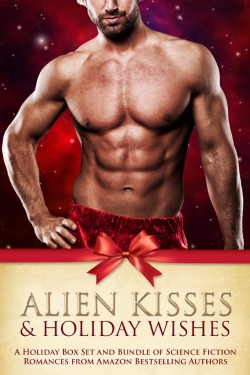 Altair comes from a bleak world, full of conflict and having to fight to survive. He's spent his whole life fighting enemies to protect himself and his people, and doesn't believe there's anything soft or good about himself. When he's injured in a battle, he's sent to Earth to recuperate, as injured people don't last long on their planet with near constant battles raging daily. He’s bitter about being sent away, since he believes that his place is with his people, but the choice isn’t his to make, putting him in a foul mood.

But then he meets Charity, a young woman who doesn't even know who he is, but is determined to spread some Christmas cheer to her grumpy new neighbor, no matter how strange and standoffish he might be. Altair's going to learn that not everything has to be hard and dark, and just might open up a part of himself that he thought had died long ago.

~ Niya ~ Holidays are great! But being at this dagrinian one allows me to see that I’m losing myself in my alien mate’s world. Megan and Kanda agree. We may have started out as captives but we are beyond that now. It’s time we stand up and show them how we humans throw a party.

We’ll just have to hurry since Megan and Kanda are about to give birth. Between creating a holiday, hot loving, enduring a few hateful dagrinians, spooky as hell lightning strikes, and a scary animal I’m sure we can pull it off.

It's Christmas time but what does it mean on Jaded where humans and Majuri warriors are learning to live together? Dervac has found his fated mate among the human females and his joy knows no bounds until she rejects him.

Hannah has things to do and a sharp eyed, curious mate is the last thing she wants, at least for now. Can Dervac figure out what she's up to and save her from herself? Will she let him? On a new world as a new civilization begins, will love grow?

When a flying saucer crashes near her house right before Christmas, Amy Miller is surprised to see that Axa'rok, the alien in command, is just drop-dead gorgeous and hotter than any man she's ever seen. The fact that he's the warrior prince of his kingdom in the stars is just the icing on the gingerbread.

The planet Axa'rok comes from has no women, and he's come to Earth to fulfill a very special prophecy. But now he's shipwrecked, and his crucial mission is in danger.

Amy is willing to help, but who exactly is the legendary Mother of Womanhood that the prophecy revolves around? Who are the creepy aliens suddenly lurking in the woods? And how will she do her Christmas shopping now?

When it turns out that curvy Amy is the key to everything, she has to step up and find some strengths she never knew she had...

Yasmin Olvera has a problem only Benar Q'Mhel can solve, but can he help her before the situation explodes, taking the two of them down with Yasmin's stalker?

She wasn't looking for love, but she found marriage. Samantha's determined to be with friends and family for the holidays, so she's travelling to Vandwa for a relaxing winter with Ashlyn. Sam finds herself drawn to Ashlyn's brother-in-law; he has a brooding disposition and a delicious six-pack. A Christmas miracle and TerraMates will help this family come together!
Posted by Heather Massey at 12:30 AM
Newer Post Older Post Home
View mobile version