Those Who Walk Among Us...

Once upon a time, I had a Roswell phase. Not the television series, though it seemed like a fun show (it had romance, too!). I’m referring to the Roswell of Area 51 fame in New Mexico—yanno, U.S. capital of secret alien technologies. Being an SF enthusiast, Roswell kind of goes with the territory.

Now I can’t for the life of me remember the source, but I once read an article that really made me think in a Herculean way about the phenomenon of aliens making contact with Earthlings. The author—I’m paraphrasing here in a big way—basically proposed that if aliens (of the non-invading mentality) really did make contact, the event would throw our societies into chaos.

Chaos of the mass hysteria kind. Governments would collapse. Riots would erupt. Cultural upheaval ensues. In short, the author stipulated our psyches would be unable to assimilate the experience. Aliens in our midst would create such cognitive dissonance that it would drive us insane.

Of course, the truth of that supposition remains to be seen. Given that an alien envoy couldn’t possibly visit every country on the planet at once (er, I’m assuming), I have my doubts about any subsequent global anarchy. It’s also possible that many countries would actually be receptive to such visits, let alone the hordes of scientists and SF fans in that category.

Still, the hypothesis gave me pause. It’s scary and disheartening to contemplate humanity’s vulnerability in such fashion. No doubt, there’d be plenty of strong reactions, ranging from helplessness to disinterest to violence. Regardless of what may come, writers and filmmakers have also lent the topic much thought. This type of prognosticating lurks in the drive to create shows/movies/books that feature alien-human contact. I have my own personal favorites, the first being Kenneth Johnson’s V, the television mini-series.

V is a highly ambitious and well-executed production despite the limitations of a television budget. Aliens, known as “The Visitors” make contact with Earth bearing honeyed words and generous overtures, but they are not what they seem.

The mini-series (and subsequent spin-offs and novels) balances a thematic presentation of the consequences of alien-human contact with both action and a surprisingly high number of romantic subplots.

I’m sure there isn’t a soul left alive on this planet who hasn’t seen V, but if you haven’t, please do check it out. Yes, it unleashes a share of B-movie moments, there’s no denying that fact. However, the creators took the story dead seriously and it boasts a fair level of tension around the issue of how humanity might react to aliens arriving on the proverbial doorstep (or "UFO Welcome Center", as the case may be).

Another great treatment of this theme is the movie ALIEN NATION and subsequent television series of the same name.

These shows involve nuanced presentations of life on Earth in the face of alien contact. The alien “Newcomers” adopt Earth cultural practices—perhaps more gracefully—than humans adapt to their presence. 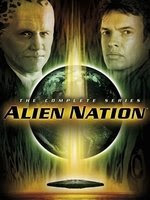 “The storylines generally revolved around morality plays on the evils of racism and bigotry using Newcomers as the discriminated minority. As fictional immigrants, Newcomers could "stand in" for hot-button social issues about African-Americans and Mexican-Americans (as well as sexual minorities like gays) and invert the usual expectations. For example, during the run of the series, George became pregnant (the male of his species carrying the fetus for part of its gestation) and during much of the episode dialog included such lines as, "If you females had to feel the pain we males feel during pregnancy, there wouldn't be any babies." The series offered insightful social commentary by illustrating what it means to be human and the often bizarre rituals we observe.”

The romances do an excellent job of echoing the greater themes, though at times the flavor is bittersweet. Whether Newcomer or human, the cast is pretty hot, too!

Lucky for us, ALIEN NATION: THE ULTIMATE MOVIE COLLECTION has just been released on DVD. SciFiChick recently presented a sweet breakdown on the specs.

So whenever an otherworldly race decides to make the pleasure of our company, we can invite them over to enjoy our art—and indulge in some sweet DVD extras! Watch these shows for the entertainment value, love them for the hope they deliver.