In Praise of Dangerous Men

I was recently reading a post by Rowena Cherry over at Alien Romance (Omnipotence, 5/25/08) in which she stated: “Personally, I like my heroes to be slightly morally questionable.” I had to agree with her most heartily, but later I got to wondering. Who was my first “morally questionable hero?” What was it about him that so captured my attention?

Fellow passengers, allow me to introduce (or maybe re-introduce) Kerr Avon of BLAKE’S 7. 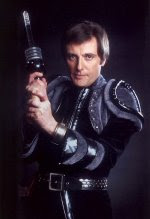 For those of you unfamiliar with the show, BLAKE’S 7 was a British Sci-Fi television series. Created by Terry Nation (of Dalek fame), it aired on the BBC from 1978 to 1981. The plot of the four-season show revolved around the adventures of several penal colony escapees as they fought the evil Terran Federation.

Avon was not the leader of the band of outlaws. He was not even particularly leadership material. He was too selfish, too self-absorbed, too interested in wealth and his own survival. He was sarcastic, rude and arrogant. He had a clipped and cutting voice that dripped with scorn most of the time. He wasn’t even particularly handsome. He had goofy hair, a big nose and very British teeth.

So why does Avon still live on in my memory? Well, first of all BLAKE’S 7 was a great show—dark, cynical and complex. It had the gutsiest ending of any series I’ve ever seen. Check out the opening credits:

As you can see, this was not your grandmother’s BBC. The other characters were interesting, but none were as intriguing as Avon. He was, in Rowena Cherry’s words, more than slightly “morally questionable.”

Haunted by a tragic back story (betrayed to the Federation by the only woman he ever loved, whom he eventually killed), he was utterly ruthless (a thief, a murderer and an embezzler) and he sneered. A lot. But he was also brilliant (computer expert), brave (was always saving somebody’s life – well, when he wasn’t killing somebody), and had a penchant for dressing in studded leather outfits (gulp!). When he deigned to flash a smile—always a rarity—it was boyish and completely charming.

Avon also had a great sense of humor. Consummately sarcastic, his deadpan insults were one of the best parts of the show. And he was so very manipulative and utterly unsentimental. He could (and did) kiss a woman in one episode, only to shoot her in the next. He was an equal opportunity anti-hero.

If you’d like to take a glimpse at the career of Kerr Avon, take a look at this:

A tribute...to a total bastard. After that, feel free to have a giggle at the production values. They only spent fifty pounds an episode on the special effects. Hard to imagine a time when the FX were considered such a low priority on the totem pole, isn’t it?

So what do you think, fellow passengers? Do you like your heroes heroic or morally questionable? Squeaky clean or on the darker side of dangerous? Who is your favorite Sci-Fi Hero?

But I’m afraid you’ll have to stay away from Avon. He’s mine! You can bet I hope to bump into him as I travel throughout our galaxy. [Spoiler Alert] Rumor has it that he didn’t die in the final scene of the final episode along with everyone else; incidentally, after killing the only friend he ever had. And if he’s still out there—I want him!