Something Daring This Way Comes

"Without change, something sleeps inside us, and seldom awakens. The sleeper must awaken." -- Frank Herbert, DUNE

While creating a post dedicated to the 2176 series, I came across a review of Susan Grant’s THE SCARLET EMPRESS by the renowned Mrs. Giggles—one that examined the 2176 series in terms of its relation to the SF and Romance genres. My mind churned with reflections about her ideas and so I decided to dedicate an entire post to them.

While neither the review itself nor the merits of THE SCARLETT EMPRESS is the focus of this discourse, you can read the complete review here. I’m going to excerpt parts of it to discuss the evolution of science fiction romance. So fill up your bowls at the salad buffet and ready your notebooks. 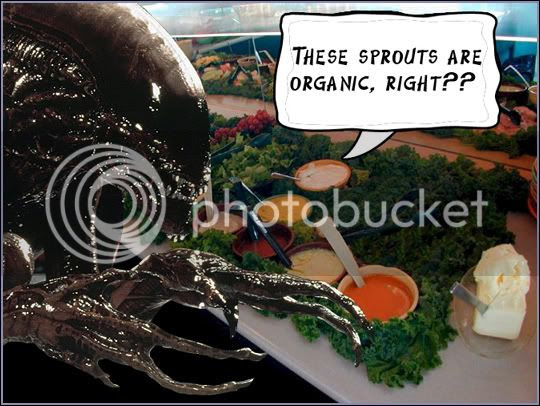 I have no objections to Kyber and Cam as characters because they are intelligent (give and take some annoying concessions to the romance novel formula where the characters have to do some silly things to justify coming together). I do wish there is some element of uncertainty or suspense in the relationship.

For a romance to succeed, obviously the hero and heroine must be together at some point. However, I’m an advocate for this subgenre to raise the romantic stakes. This element could be expressed any number of ways, but my take on Mrs. Giggles statement is that raising the stakes might involve tweaking some or all of the expected romance conventions regarding relationship development and dynamics.

I expect SFR to experiment with darker shades of romance. I expect there to be very real physical, emotional, or psychological consequences for the couple, unalterable and unavoidable. I expect more sexual tension than actual sex. And if an author can manipulate me to the point that I start to doubt the HEA, even better. That kind of strong romantic tension means I’ve become emotionally attached to the couple.

Mrs. Giggles goes on to write:

Ms Grant does one thing I've never seen many (or is that any) futuristic author has ever done: she plunges her story into a turbulent conflict that is comparable to a decent science fiction sociopolitical action drama…she inexplicably skirts around actual scenes that could have made the story more actualized and gripping and instead relays these scenes… There are other problems that could have been fixed by more pages and more space for the story to develop.

I’d argue that this is an issue of commerce over art. I’m betting many authors wouldn’t take expository shortcuts if they had more word count freedom. I’m an advocate for higher word counts in science fiction romance, because not only am I reading a romance, but I expect complex worldbuilding and a “political” plot too. Even just an extra 50-75 pages can make a world of difference for some stories, especially those spanning across numerous worlds or involving multi-layered political systems.

Then Mrs. Giggles points out:

...priority screw-ups in that it allows silly games of the heart to take more prominence over restoring democracy and freedom to the whole world....

Science fiction romance isn’t the only subgenre that struggles with “priority screw-ups.” Romantic suspense stories often demonstrate the same struggle—capture the serial killer or consummate the relationship? Not an easy call for an author to make. (Romantic suspense author Allison Brennan—who allocates more space to the suspense arc than the romance one in her books (darn well, too, I might add)—posted an insightful piece related to this in her Romancing the Blog post.)

Another side of the coin is this: Given an average word count, would some stories benefit from an “economy of style” with regard to the romance to avoid glossing over the political plot elements? In order to accomplish this, should science fiction romance authors experiment with the execution of the romance? I think they should. I’ve read SFR that is every bit as romantic as a non genre romance, but the delivery is different, ranging from scene staging to vocabulary usage.

For example, devices such as introspection is good because it helps readers engage with characters, but too many passages of it might force intriguing plot material to the sidelines. I’ve read books—including SFR but also other romance books—that featured numerous passages of introspection that covered the same ground.

These passages neither moved the relationship forward nor introduced new information. In fact, I found them so repetitive that I wondered if either the author or the editor purposefully planned it that way because of the belief that readers wouldn’t remember anything from one chapter to the next. On the other hand, perhaps certain conventions are so embedded in the collective unconscious that they go unnoticed.

Or, maybe it’s a little of both.

I expect SFR to challenge the conventions of both romance and SF. The job of a science fiction romance author is to integrate them both without losing the essences of either parent genre or worrying about pleasing every last reader.

As I discussed previously, science fiction romance fans have different expectations. The science and worldbuilding should be accessible but also believable. An HEA is expected, but the author should make both the characters and therefore the reader work hard to reach it. And done compellingly, a little romance goes a long way...especially in science fiction romance.

But at the heart of its problem is an identity crisis: the authors that contribute to the series still try too hard to keep to a formulaic set of rules instead of allowing their creativity to rip unconstrained by the restrictions of the genre. (Since the subgenre is pretty much dead, which means the formula doesn't quite work anyway. Why try so hard to follow it then?)

With all due respect, Mrs. Giggles—dead, schmead. Why write SFR then? Because despite market limitations/pressures/cycles, there are always authors who heed that artistic call—and then there are the fans who answer it.

But there are a few other reasons. First, we can reframe how we categorize the subgenre. Recognize that genre categories exist largely to organize our purchasing behavior. How a reader defines a book and how a bookseller defines a book might at times constitute different elements. Perhaps some of the challenges in the SFR market lie not in the books themselves, but in finding the right path to the fans.

Third, even within a strict definition, enough authors have shown SF and romance can be integrated, and integrated well. Even if one considers a book flawed, the seeds are often there. But I agree that more challenges lay ahead. With that in mind, I’ll step up to the plate and propose a few strategies for resolving science fiction romance’s “identity crisis”:

* Err on the side of art and skew SFR stories to the SF side. Sexy romps are great, but longtime readers—the ones who will sustain the genre through every market cycle—aren’t in it just for the sex. Too much of anything gets boring, and who wants that?

* It’s time for a new identity. Either drop the term “Futuristic” altogether, or start actively using “Science Fiction Romance” to differentiate books that swing more towards SF. (“SF Romance” or “Speculative Romance” is fine too if publishers think one too many words on the spine will impact overhead costs and/or the sky to fall.)

There’s nothing wrong with the term “futuristic” in and of itself, but it has a reputation for being “SF lite.” Sometimes it is, sometimes it isn’t. But I don’t really hear about “mystery lite,” “suspense lite,” or “fantasy lite”—why keep perpetuating that negative connotation when it comes to science fiction and romance? Ladies, embrace thine frontal lobe here.

* Maintain the beloved Happily Ever After, but it must fit the story. Not every
ending will call for a wedding or babies. Keep it real.

* Here are a few suggestions about covers.

* Shelve SFR books in the romance section regardless of publisher because that’s where the books will more likely find readers willing to try something new. It’s also where the sales are. Because SF is diversifying so much now, and because of the potential strength of online/viral marketing, SF readers who also enjoy romance with their genre fiction will follow the buzz across the aisle.

* Resist any talk of “identity crisis” or SFR as somebody’s stepchild. Instead, let’s talk about science fiction romance in terms of identity integration (y’know, like what Sybil accomplished). Harness the power of the Internet to accomplish this feat.

What do you think? Agree, disagree, have ideas of your own? Hit me up!