Welcome to the Retro-future of Steampunk

What is steampunk? I'm so glad you asked.

When I think of steampunk, I envision brass goggles, punch cards, Victorian fashion, difference engines, airships, and Captain Nemo’s elegant submarine. Just cast your eyes below to see what I mean:

Steampunk is everything hip about Jules Verne & H.G. Wells, yet it also suggests the terror of living in a steam powered culture. Either way, these retro-futuristic stories just keep getting better.

A subgenre of SF & Fantasy, steampunk also has elements of action/adventure, horror, mystery, and romance. You’ve encountered it in books, film, and television shows even if you didn’t know its name. It’s also a fashion & cosplay trend, as you might have noticed while attending your last comic book convention or Halloween party.

Steampunk inspires artists, engineers, architects, and inventors to visually stunning heights. But it’s much more than all of that, of course.

Steampunk is a state of mind. 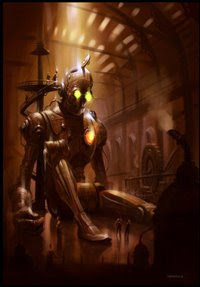 There are reasons galore behind the popularity of “retro-alternate-19th-century science fiction”. Steampunk is quixotic fashion paired with innovative inventions. In fact, the concept of inventions that debut far ahead of schedule represents one of the most fascinating aspects of the genre. Steampunk science is far from cold, modern, and sterile. It’s warm, flashy, and larger than life. New collides with old to the point that the inventions are characters in and of themselves.

Steampunk—and its subgenre clockpunk—enables the audience to fantasize about being that first person to invent a clockwork automaton or steam powered rifle. But no matter how surreal, the technology means nothing without a riveting tale to give them life. There’s no limit to the places a steampunk adventure can take you. Characters explore the shadowy corners of 19th century London, traipse through exotic lands, soar across the untamed skies, and even venture into the nether regions of space.

For an exceptional discourse on the steampunk genre, visit Voyages Extraordinaires, which presents “A History of Steampunk”: 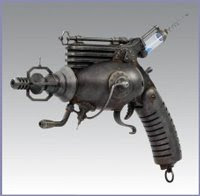 (Thanks to SFSignal for the links.)

But if you really want to take the plunge, The Aether Emporium is “...a one-stop resource and archive for all things Steampunk.”

Since, stylistically, steampunk is one of the most romantic subgenres of SF, The Galaxy Express is hosting a week-long celebration this week for your reading pleasure. There’ll be commentary and links galore—a refresher for some, an introduction for others. 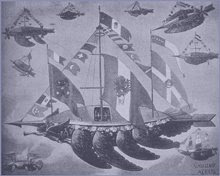 I know you’re itching to ditch this locomotive to board one of those fancy-schmancy zeppelins, but don’t leap out the airlock just yet. Stick around for some steampunky giveaways later this week!