Why I'm so glad you asked!

The story revolves around the Princess of the Moon, Aurora and her three cyborg companions (Kugo, Djorgo, Haka) who must travel to the Great King planet and restore the Galaxy Energy. The universe is becoming more and more unbalanced as the Queen of the great Planet grows older. Their adventure includes battling the starmen who are transformed from the unbalanced minerals and planets.

In the U.S., this show aired as the oh-so-much-more-eloquently titled SPACEKETEERS:

Okay, so maybe calling SPACEKEETERS science fiction is stretching things, but the Japanese show was based on the adventures of The Monkey King and the monk who tamed him. In the U.S., the story arc was altered significantly to resemble The Three Musketeers, simply because “Jim Terry Productions felt that the Japanese classic would have little meaning for North Americans…”.

Regardless, the origin story shone through and while STARZINGER wasn’t one of my top favorites, I still enjoyed the show’s exotic visuals and irreverent humor. (Take that, Jim Terry!)

Who’s that Monkey King dude and why did he journey to the West? 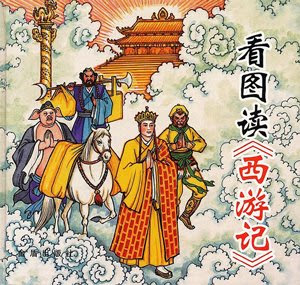 Once upon a time, there was a monk by the name of Xuan Zang who went on a pilgrimage to India (or "the West" to ancient China) to procure Buddhist religious texts. JOURNEY TO THE WEST is the fictionalized account of that pilgrimage, emerging during the Ming Dynasty in the 1590’s.

Zang’s foremost of three disciples on this journey is the immortal Sun Wu Kong, a.k.a. the Monkey King. Sun Wu Kong had a mischievous, rebellious, and even violent nature, but these traits are tempered by a magic gold band placed upon his head by Buddha himself.

The other two disciples include Zhu Bajie (“Pigsy”), an immortal banned to the human realm because of his insatiable appetite for food and sex; and Sha Wujing (“Sandy”), a gentle river-ogre exiled for inadvertently destroying the Heavenly Queen Mother’s crystal goblet.

Along the way, the four characters encounter all manner of exotic demons and engage in epic battles.

If you’re interested in reading the story for yourself, here’s a Web page with links to all sorts of print editions for adults and children. If you have limited time, here’s a page with a synopsis and character descriptions.

You'll see that JOURNEY TO THE WEST is a fascinating, seminal tale that's provided the foundation for many more popular Asian productions like DRAGON BALL, RANMA 1/2, and A CHINESE ODYSSEY.

So what does STARZINGER have to do with science fiction romance? 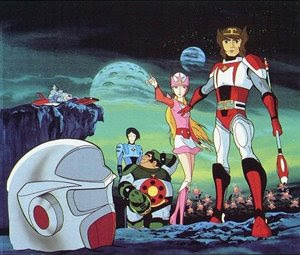 Since Ol’ Know-It-All Jim edited STARZINGER down to a paltry 26 episodes, the ending never aired. Therefore, the story of Princess Aurora and Jesse “The Monkey King” Dart became, for me, “the romance that could have been.”

The Aurora I know is a beautiful but sheltered and naive princess unaware of the galactic threat until it bites her on the bottom. Her only hope of achieving success lies with her cyborg companions, most importantly Jesse.

Jesse is cute, funny, rebellious, and smart—almost too smart for his own good, hence the gold band Aurora uses to control him. I remember her urging Jesse in that high-pitched mewl of hers to refrain from violence whenever possible—no small feat when slimy, gigantic mutants are attacking from all corners of the galaxy. (And I still question the cyborg angle because Jesse is as hot-blooded as they, er, come).

As the journey progresses, they slowly learn to trust and respect each other. Jesse starts to appreciate the power of teamwork while Aurora gains the insight that combat is sometimes a necessary element in the path to peace.

I didn’t realize it at the time, but later it struck me how their interactions reflected the whole sweet-tempered-heroine-tames-the-Alpha-male relationship arc. And because of the origin story, it’s a really fresh twist on the concept. But here I must stop, because I don’t know the end of the story.

I can only hope that someone, somewhere, will pen a new incarnation, one that involves a Happily Ever After....