Science Fiction Romance: The Bestest of the Weirdest, Part I

To help welcome 2009 here on the Galaxy Express, Chef suggested a full course of exotic food and drink. A fine idea, but since stores are running low on coriander (as well as melange) until we reach Andromeda, I offered up an alternative:

A weeklong tribute to some of the strangest science fiction romance out there.

While not traditional fare, there is a surreal intersection of science fiction, romance, and weirdness in the works that will follow, without which no one can claim her life is complete. 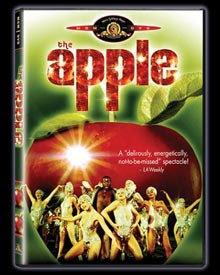 Yes, you read that quote correctly. A science fiction horror movie musical set in 1994—from a film made in 1980.

One fine summer day, my husband excitedly informed me, with a mischievous grin upon his boyish face, that he had acquired THE APPLE, a sci-fi disco disaster just released on DVD. Well, I’d watched my fair share of “worst movies” from the interminable ASTRO ZOMBIES to ZOLTAN: DRACULA’S DOG (with a little MANOS: THE HANDS OF FATE thrown in for good measure). After all, I’m a MSTie through and through.

Given this cinematic pedigree, I was prepared for anything…or so I thought.

From the opening number credits of auteur Menahem Golan’s masterpiece, I could see that this was one of the most cinematically challenged films ever. In fact, this film is so horrendous that “Reportedly, during its premiere at the Paramount Theater in Hollywood, audiences threw their free souvenir soundtracks at the screen, causing extensive damage.”

Take a look at the trailer for THE APPLE and you just might be able to empathize with their sense of justifiable outrage:

So it should come as no surprise that we launched a jibe-studded commentary the minute the film began. Indeed, THE APPLE was a real winner. I wasn’t even sure I’d be able to last more than two minutes. But then, something strange happened.

I actually started to like THE APPLE. Like it in the sense that the film is one of those “so bad it’s good” experiences. Like it in the sense that the story engaged me. Even my body posture changed. I stopped making fun of it. I leaned forward in order to not miss a second of the outrageous musical numbers that’d put anything in SHOWGIRLS to shame. I catalogued which songs were already a perennial favorite.

Not only that, but I became invested in the love story.

The hero of this celluloid disaster is named Alphie. If that’s not Alpha male enough for romance lovers, I don’t know what is. Bibi is his TSTL* paramour. They’re a couple when the story begins, and after their devastating separation, it’s a nail biting ride of will-they-or-won’t-they-reunite.

Yes, it’s that gripping. (Well, okay…actually it isn’t. But stay with me here.)

If that’s not enough to convince you, THE APPLE features a uniquely designed futuristic setting—albeit one designed by a gaggle of blindfolded chimpanzees. BIM emperor Mr. Boogalow is the arch-nemesis of the story, and not only does he drive the plot with his unique brand of conflict, overacting, and glamorous wardrobe, he built an empire around show business. He rules the world with impunity through brainwashing the masses through his music TV show (predating AMERICAN IDOL by nearly two decades— Boogalow was clearly ahead of his time).

Gaze upon His Evilness just once, and you’ll forget Darth Vader ever existed: 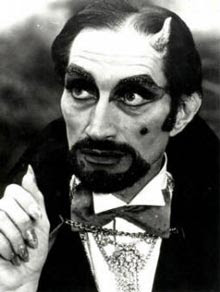 THE APPLE is like a cross between XANADU, STREETS OF FIRE, and Laz Buhrmann’s MOULIN ROUGE!—on crack, that is. Yet many of the musical numbers have an endearing quality, and like any properly structured musical, actually serve to move the plot forward. The songs are even somewhat catchy; in fact, I listen to the soundtrack while driving on occasion (and you’d better believe I take advantage of warm weather days when I can open the windows and blast the volume).

This one in particular gets a lot of airplay:

Now even with all of the above, you wouldn’t think there could be more to loathe love about THE APPLE. Well, strap on your seat belts, because this film involves one of the most appalling abuses of deus ex machina that I’ve encountered--ever! This jewel of an ending alone is worth the price of admission.

Want to know more? I know you do, because one bite of THE APPLE just isn’t enough. Like Adam and Eve of old, feast upon the links below:

* The 80’s Movie Rewind site amassed all sorts of trivia and behind the scenes info.

* Here’s an in-depth, riotously funny review from Cold Fusion Video Reviews. [Beware the Spoiler Alerts, however] My favorite quote from the review is this: “So it’s startling to see, back in the early days of their careers, how they [the producers] teamed up to make a movie that met no demand, that nobody wanted to see.”

* Another musical number in It’s a Shiny, Dancy, Pop-Fascist Future in “The Apple”, thanks to the brave souls at io9.

* But if you just can’t bring yourself to watch the movie firsthand, Cool Cinema Trash provides a summary along with images of this lush musical sensation.

Somehow, THE APPLE transcends the sum of its bizarrely jointed parts. It’s an awful bit of filmmaking from the Golan-Globus pair that would later give us BREAKIN’ 2: ELECTRIC BOOGALOO; nevertheless, upon seeing it, I still connected with the spirit of what the film wanted to be. It has a futuristic setting. It has a romance. It tells a gripping story (umm…well, it has the first two at least).

THE APPLE just goes to show how far and wide I’m willing to travel for a science fiction romance experience. Cry for me:

*Too Stupid To Live