It’s been a mere six months since The Galaxy Express proposed that Steampunk is the New Black. Based on the hundreds of hits generated by that post, I wasn’t alone in that cogitation.

And the steampunk resurgence is not just for SF (I’m looking at you, GHOSTS OF MANHATTAN). Steampunk romance has been ripe for the picking for some time. Frankly, I’m shocked it hasn’t happened before now, given the perpetual popularity of historical romances. Wouldn’t you just die for a Western steampunk romance?!

For a great overview of steampunk, I highly recommend the STEAMPUNK anthology, edited by Ann and Jeff Vandermeer. Not only does it include a great collection of stories, but also a thoughtful introduction by Jess Nevins titled “The 19th-Century Roots of Steampunk.”

In the essay, Nevins points out that there is often conflation between an Edisonade type story, with its reputation for action/adventure and stylish trappings such as brass goggles, airships, and automatons, and steampunk, which can also include those elements. However, a core difference is that steampunk is “an argument with the science fiction of previous generations” (p.8).

I mention this as a friendly reminder to authors new to the subgenre to be clear about what you’re writing, and for readers to understand what you’re paying for. A steampunk romance has the potential to explore some very dark, subversive territory, or it can be a yarn of sheer old fashioned Victorian gaiety.

Are both possible in one novel? I’m sure we’ll discover that soon!

Naturally, I couldn’t resist the call, so here’s a rundown about what’s in the steaming pipeline:

Gail Dayton’s NEW BLOOD is out now! Read an excerpt here. This week she's hosting a giveaway at To Be Read—So Many Authors, So Little Time. Avail yourself of the Smart Bitches review of NEW BLOOD while you’re waiting. 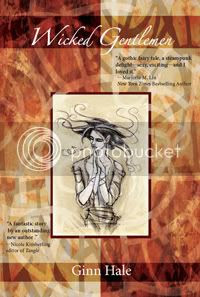 Nathalie Gray is writing PISTOLS, CORSETS, AND FLYING PRIVATEERS. I thought her novella MECHANICAL ROSE was a blast. Agents and editors, don’t trip over each other while rushing to offer this rising star a contract.

Meljean Brook is contracted for “a new steampunk romance series called the Iron Seas” (THE IRON DUKE, THE INVISIBLE CITY).

Katie MacAlister announced her new steampunk series that will debut in February 2010.

Caitlin Kittredge sold “a YA series that’s a trilogy of steampunk fantasy called The Iron Codex, which is forthcoming in 2010.”

Meredith Holmes revealed in this interview that she has “a Steampunk romance in the works….”

Ciar Cullen posted on her Web site that her current work in progress is a novel that will be “the first in a series called Steamside Chronicles.”

Oh my lord, I’m about to swoon. I know—let’s all Slip Into Something Victorian! Is there anyone I missed? Share your news in the comments!