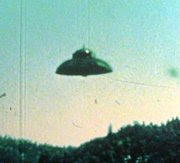 I went through what might best be referred to as my “Roswell” period about fifteen years ago. I read a variety of books, ogled a plethora of UFO photos, watched a cross section of documentaries, and fancied myself as an amateur Ufology scholar.

Looking back, amateurish was more like it, but I dug all of those aliens-among-us stories. Maybe it was a holdover from V.

Space lizard love or not, I feverishly believed in all the ensuing UFO hype. And part of me still holds out that someone, somewhere, will uncover or declassify real evidence demonstrating that space faring aliens have indeed visited Earth. (After all, do they have DVD box sets of THE PRISONER and MONTY PYTHON near Arcturus? I think not. They need Amazon, here on Earth.)

This UFO period more or less coincided with the start of that SF-Romance-Paranormal hybrid fest known as THE X-FILES. Given how seriously I was caught up in Ufology, as well as my love of SF, it’s no wonder I became a fan. It’s a classic show any way you look at it.

But every time I see the show’s intrepid hero Fox Mulder, I wonder why I don’t identify with him that strongly. He’s eccentric, charismatic, and thanks to David Duchovny, Mulder’s cute, too. (Don’t get me started on the Lone Gunman trio—rowwrrr!)

So what stood in the way of me identifying more fully with the show’s foundational character? Or more accurately…who? 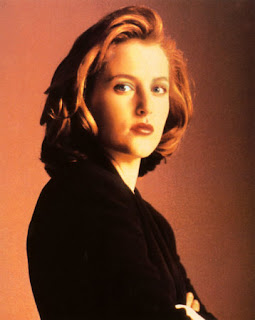 The romantic relationship between Mulder and Scully is the stuff of legends, but there’s another aspect to their relationship that Chris Carter and Co. neglected to inform viewers about: I developed a serious fangirl crush on Agent Scully, one that lingers to this day. And while I don’t blame them, I hold them 100% responsible for my condition.

But why? How? Scully the Skeptic questioned everything Mulder threw at her, and in a vicarious way, it meant she was questioning my beliefs as well, as aligned as they were with Mulder’s viewpoint. I shouldn’t have identified with her so strongly. The affair was doomed, I tell you, doomed!

I have a few hypotheses, though. The first is that Scully, being an intelligent, savvy woman, made her impossible for me, also a woman, to resist her charms. (Of course, husband-o-mine and I began joking that after Mulder correctly solved a case for the 101st consecutive time, maybe Scully should start to buy into banshees and bogeymen.)

Another possibility of why I was lured to the Scully side is that she was played by the irresistible actor Gillian Anderson. In my opinion, she’s a far more accomplished thespian than Duchovny. Her ability to emote, and the sympathy she brought to Scully, lent her a magnetism that was mesmerizing to watch. I became more than a fan of Agent Scully—my crush extended to the actor as well.

Duchovny’s great as Mulder, but when I see him in another role…well, I usually see Mulder. Anderson’s different, however. She has a wider range. With her, I can indulge in more than Dana Scully for a while—THE HOUSE OF MIRTH, anyone? Heck, even while writing this post, I couldn’t resist poking around her official Web site for a few hours minutes.

Here’s a semi-recent Q&A with her last year at WonderCon in San Francisco, divulging what her favorite episode happens to be. (BTW, yours truly was there, front and center.)

During the panel, she was very candid about her good days and bad days in acting, and how it was much harder than she anticipated to pick up the character for the second movie after a 6-year hiatus. It’s a pity the sequel didn’t live up to expectations.

But, that doesn’t change the first four seasons of the TV show, which often had me counting the minutes until the next episode rolled around again. It always gave me a reason to stay in on Friday nights.

To me, the show broke ground. Scully wasn’t an accessory; she was an equal partner. Moreover, Duchovny came to rely on her for much more than just FBI procedurals. He became emotionally and psychologically dependent on her strength, wisdom, and ultimately, her love.

This camaraderie and trust help represent the best SFR can achieve. Despite all of the preternatural phenomena, the relationship felt real—not a mechanical device to move the plot(s) forward.

What do you think? What else could our present-day novels take away from this 90s hit?