"We've Got A Lot Of What It Takes To Get Along"

Gone are my blues,
And gone are my tears;
I've got good news
To shout in your ears
The silver dollar has returned to the fold,
With silver you can turn your dreams to gold.

Not only that, but you may have heard that Barnes & Noble acquired Fictionwise. Then there are the rumors that B&N is going to enter the e-reader market.

From Dear Author, I learned that “Lightning Source will now provide 85,000 titles from 13 publishers for the Espresso Book Machine.” I don’t think it’s such a far-flung future possibility that customers will be able to choose from among ebook offerings, and obtain a print version almost as quickly as they can order the ebook online. As Kirsten Saell noted in the comments, “The long tail of epublishing now available for print as well…”

My oh my, all of this spectacular growth in the ebook industry and corporate positioning underscores the relevancy of this recent comment from Samhain Publishing Executive Editor Angela James: 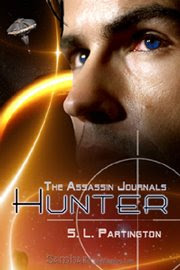 “Futuristic romances do pretty well for us. Many of the editors are huge fans of the genre and we’re always wishing for more submissions in this genre (send to angie@samhainpublishing.com thanks ;) ) but it’s definitely a specialized one to write due to the world building needed.”

There she goes again! Angela James is blogging about Samhain’s interest in acquiring this subgenre. Bird in the hand, as they say…but, you ask, why flock to such a welcoming nest?

Here’s why: Among mainstream print publishers, advances are shrinking, print runs are shriveling, publishers are acquiring fewer books, and deals are getting slashed. According to ICM literary agent Amanda Urban, “…fewer books will be published, and those whom we call midlist writers will no longer get published. The major writers will keep publishing, debut books will always be published, and the ones in the middle will have a problem.”

All of which contributes to an even tougher time for submitting science fiction romance than in previous years. “You’ve got to ask yourself one question: ‘Do I feel lucky?’”

If not, especially given the current level of competitiveness, I believe it’s important for authors and aspiring authors to maximize opportunities such as submitting some or all of their manuscripts to reputable epublishers and staying current with developments in epublishing. Even if ebooks don’t overtake print books as far as science fiction romance is concerned, they will still be an enormously healthy supplement. Ebooks, far more than print, have the potential to maintain the subgenre’s viability and provide a haven for midlist authors.

Aspiring authors especially, if the form rejections are stacking up (as well they may be with agents reporting a significant increase in queries), might benefit from re-evaluating the goal of landing an agent or selling a book to a major print publisher. By all means, make that a goal, but why not consider including a reputable epublisher in your submission list? The sales figures I excerpted is significant proof that any stigma associated with epublishing/ebooks is waning.

How can I put this more colorfully? Epublishers are primed to be “in the money!”

How much are you in for?