Earlier this week, a representative from Network DVD contacted me with the news that they are releasing a special edition of FIREBALL XL5. 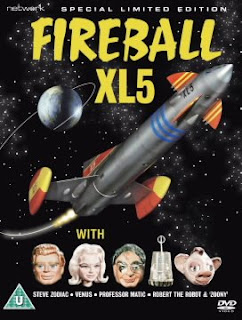 Network DVD is delighted to announce the release of one of Gerry Anderson’s most cherished fantasy series. FIREBALL XL5 SPECIAL EDITION (U) is available to buy on DVD on 29th June 2009, RRP £59.99. This 6–disc set includes all 39 episodes from the iconic series, complete and uncut plus exclusive extras including a 60-page book and new documentary.

The year is 2062 – 2063, the peace of the universe is maintained by World Space Patrol’s finest rocket ship, the eponymous Fireball XL5. The memorable crew comprises of the glamorous doctor Venus, middle-aged navigator and engineer Professor Matthew Matic and Zodiac’s co-pilot Robert the Robot, whose fantastic characteristic being that he is transparent, and bears the voice of creator Gerry Anderson himself. This brave, gallant crew is led by the heroic Colonel Steve Zodiac. They explore various exotic planets and other life forms and protect the innocent from sinister intergalactic villains such as Mr. and Mrs. Space Spy.

Since the programme’s very first transmission on October 28th 1962, young audiences – not to mention a good number of adults – all over the world were held enthralled by the adventures of Steve Zodiac and his crew. Gerry Anderson’s Supermarionation marionettes were first introduced in Four Feather Falls (1960), and since then a wondrous tradition in entertainment was born. The marionettes were used again and again in immensely popular children’s shows such as Supercar, Thunderbirds. This release will appeal to all who are fans and is also set to convert a good number of new viewers, who have yet to experience its magic.

• A Wonderland of Stardust: a brand new documentary about the making of Fireball XL5 featuring contributions from creators Gerry Anderson and Sylvia Anderson, as well as numerous members of the crew including David Elliott, Alan Pattillo and Brian Johnson

• A Day in the Life of a Space General: A brand new, colourised edition of Fireball XL5, taken from a new HD transfer of the original film elements

I had to know more, so I visited one of the company’s Web sites and discovered this about them:

“Whether it is World Cinema, a British movie classic, something shocking or good old-fashioned entertainment, the emphasis is always on quality and we aim to cater for a diverse yet distinctive movie palate which the studio system does not offer.”

Here’s a clip of FIREBALL XL5 in color:

According to the Network DVD “News” section, they’re also hosting a FIREBALL XL5 “Theatrical Screening” on June 27. There’ll be cool clips from the show and a Q&A with Gerry Anderson!

Who’s down for a trip with me to the ODEON Covent Garden in London?