Therefore, I’m presenting an extra round up of science fiction romance related links to wind up the year.

In November 2009, Sherrilyn Kenyon’s science fiction romance BORN OF FIRE hit the NYT bestseller list. So sorry I missed reporting this news in a timely manner, but you can read an overview of the author's success in A Champion is Born at Spacefreighters Lounge. Sherrilyn Kenyon's journey demonstrates how challenging the market has been for SFR—which makes success stories like hers all the sweeter. At any rate, congratulations to Sherrilyn Kenyon! (Thanks to Susan Grant for the link to Ms. Kenyon's post). 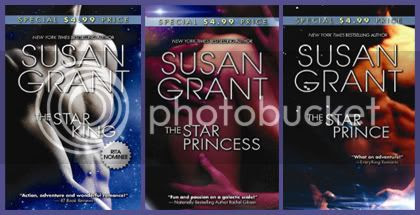 Congratulations to Linnea Sinclair (HOPE’S FOLLY) and Robin D. Owens (ECHOES IN THE DARK), both of whom are Romantic Times 2009 nominees for Best Futuristic/Fantasy Romance. Yay!

Speaking of Linnea Sinclair, she guest blogged at The Book Smugglers as part of Thea & Ana’s annual Smugglivus event. While there, you can catch up with author Nalini Singh to find out what books she read in 2009 along with an update on her current projects.

Oh, and speaking of Linnea Sinclair again (!), she blogs about the intersection of military SF worldbuilding and characterization in AN OFFICER AND…

Author Jess Granger (BEYOND THE SHADOWS) reflects on Avatar, Star Trek, and V. You can also read a recent interview with the author at Sequential Tart.

Io9 blogged riffed about the cover of Jacqueline Lichtenberg’s futuristic vampire romance THOSE OF MY BLOOD. Regardless of the reactions to the cover, the well-informed author referred to Ms. Lichtenberg as a “science-fiction romance author.” Boo-yah! (Thanks to Lisa Paitz Spindler for the link.)

The name says it all: The Very Best Science Fiction Romance I Ever Read—“A totally subjective showcase of Kimber An's favorite authors on the final frontier.” Head on over and tell her about your favorite SFR.

Galaxy Express passenger Athena Andreadis wrote an insightful piece on why I will never eat at McDonald's again since the last chicken nugget I consumed there was full of nasty gristle how "dominant tropes of contemporary speculative fiction reflect the malaise and distrust of science..." in Science Fiction Goes McDonald's: Less Taste, More Gristle. She reflects on the importance of both story and "convincing, consistent worldbuilding":

"There have been recent lamentations within the tribe about SF losing ground to fantasy, horror and other "lesser" cousins. Like all niche genres, speculative fiction further marginalizes itself by creating arbitrary hierarchies that purport to reflect intrinsic worth but in fact enshrine unexamined cultural values: hardcover self-labeled hard SF preens at the top, written mostly by boys for boys; print-on-demand SF romance skulks at the bottom, written almost exclusively by girls for girls (though the increasing proportion of female readership is exerting significant pressure on the pink ghetto walls).

The real problem is not that science is hard to portray well in SF. The problem is impoverished imagination, willful ignorance and endless repetition of recipes. In short: failure of nerve. Great SF stories are inseparable from the science in them. A safe, non-demanding story is unlikely to linger in the readers' memory or elicit changes in their thinking."

Athena Andreadis also has two stories in Crossed Genres: Dry Rivers & Planetfall. She wrote about the backstory of this larger universe here.

Ten Ways Space Travel Isn’t Like Television or the Movies presents an interesting comparison between real life and fiction, particularly when it comes to the fatality of exposure to space:

“…Thanks to Henry’s Law the drastic change in pressure would cause all the liquid in your body to evaporate at once, from your saliva to your blood to your urine. Because of this, your body expands to about twice its size, while you slip into unconsciousness (don’t worry, the whole process takes about fifteen seconds).Within a few minutes all the liquids and vapors remaining in your body will be sucked out into the void, leaving a dried husk of a corpse behind. And no, not all of this is speculation, as a couple of astronauts have actually come close to going through this whole ordeal and were quickly rescued.”

Simultaneously fascinating and sobering. (Thanks to Kathryn B. for the link.)

On a much lighter note (but worth considering just as seriously), Rowena Cherry brings us In Praise of Underwear (in speculative romance).

If you’ve been considering self-publishing your science fiction romance, check out Moriah Jovan: My Path to Self-Publishing over at Babbling About Books, and More. It’s a no-holds-barred look at the realities and rewards of an alternate publishing route.

This blog post by Dorchester editor Leah Hultenschmidt appeared back in the spring, but I thought it would interest you in light of our recent discussions. In Future of Futuristics, Ms. Hultenschmidt contemplates:

"We’ve had some in-house chatting this week, wondering if the label “futuristic,” ironically enough, has become outdated. There’s definitely been a drop in submissions and a resulting drop in published books. Has it become passe, eclipsed by urban fantasy? Or is it just time to refresh and revamp?"

Say, I've got the memo right here—refresh and revamp is in the house!

So, my terrific passengers, do you have any SFR news? Any special plans for the holidays? What are you going to watch, read, and eat?