It’s hard to find a leading character that’s had more of a profound and long-lasting effect on the science fiction romance community than "It Hero" Mr. Spock. Before the original STAR TREK’s premiere, most people had never seen anything like him—both physically (Those ears!) and mentally (That logic! That torture!).

As we discussed previously, it was this compelling, multifaceted characterization that drove early fan fiction. He was the reason why many wanted the show to continue—both in season three and ST:TMP. He’s the reason why we cried during KHAN, and we laughed during THE VOYAGE HOME.

This set my Mentat mind in motion.

Seeing as how Hollywood appears bent on remaking every film from the time of the Lumière Brothers to date—and how mashups of literary classics are currently all the rage—why not stir the silver screen pot with some SF classics by recasting them with our beloved Vulcan?

And so came the following logical countdown:

# 5 Spock as the alien in STARMAN

This film’s due for a remake anyway. The sting of Columbia greenlighting it and passing on that other little known film called E.T. (you might have heard of it) should have healed by now.

Put Spock in the Jeff Bridges role. He could land on Earth during his time of Pon Farr. There, he meets Lady Gaga in the Karen Allen role. (Gotta bring in the kids and think of the cross-promotion! They can sing duets!) Sparks erupt and the box office explodes. Have him sample some Reeses Pieces too, just to win back some of Columbia’s lost product placement cash. “My mind cannot fathom how such a small delicacy commands such rich taste!”

Forget the recent Keanu Reeves misfire of THE DAY THE EARTH STOOD STILL (please!), remake it with Spock as the lead. The 1951 Michael Rennie seems like a bit of a precursor for our favorite Vulcan anyway.

Spock: “I'm impatient with stupidity. My people have learned to live without it.” (Actually, that’s a real line from the classic film. Add a “Dr. McCoy” in there and you can see how it could be very Spockesque.)

Following along this line, we could also swap Klaatu out for Tony Montana. After the soldiers fire on him, the alien commander utters the line, “Okay. You wanna play rough? Okay. Say hello to my little friend!” Out comes Gort the robot, lasers blastin’.

Hmmm, now that I'm going there, wonder how Spock would work as the lead in a SCARFACE remake? 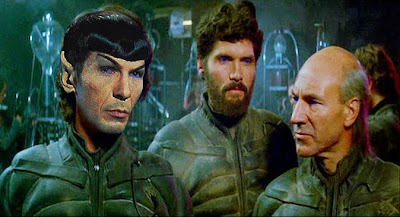 Conquering his fear from the Bene Gesserit pain box would be a breeze. Planning strategic Fremen raids on the Harkonnens wouldn’t be a problem, either. But riding giant worms while high on spice…? That might bring out a new side to his half-human/half-vulcan self!

“The worm is the spice! The spice is…fascinating!”

# 2 Spock as the captain in WAR IN SPACE

Trust me, no matter who or what you recast in this movie, it could only help—be it Spock or a slightly used toaster.

Sigh. This project would probably never get off the ground, though. Once Spock sees the toy robot as the villain, logic would dictate he fire his resident Ari Gold and hurl him into the Doomsday Machine immediately.

“I suggest you take your percentage from this, sir.”

I can see it now: Obi Wan and Luke meet up with “Spock Solo” in the bar as he devours some “light” philosophical reading on Technological Determinism in between sips from his galactic sarsaparilla. “I understand that you need transport, which I can readily provide. However, your demands for haste and discretion dictate that my remuneration remain quite high.”

He’d also be an ace at playing the Harryhausen-inspired chess game with Chewbacca—but only so far. “Logic dictates that I occasionally let the Wookie win.”

I sense a tremor in the box office returns…!

So that’s my list. I want these projects rolling as tent poles by next summer. What would you toss into the mix, oh dear readers?