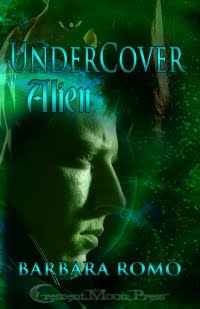 I discovered bunches of news and events that couldn’t wait until next month, so here goes:

First, there was TOUCHED BY AN ALIEN. Then came ALIEN REVEALED. And now, you can also read UNDERCOVER ALIEN by Barbara Romo (Crescent Moon Press). I discovered this release in the pages of the current RT Book Reviews. According to her bio,

...Undercover Alien...introduces the Olam, an ancient species with an unusual interest in Earth and its humans. Their sometimes helpful, sometimes just plain scary, interference will continue in Prodigal Alien and Accidental Alien.

Wouldn’t it be a gas if I put together a list of all the SFR/erotic SFR books with “alien” in the title?!

In other release news, Kaye Manro’s FORBIDDEN LOVE is now out! The author is giving away mucho copies of her book, and it’s free and easy to enter for a chance to win. All you have to do is leave a comment at any of the posts on her current blog tour. The next two are Monday, May 17 at Nancy O'Berry, and Tuesday, May 18 at the blog of Melisse Aires (CYBOT AWAKENED).

[More below the cut]

Stay tuned for Publisher’s Showcase at the SFR Brigade. This special event will run this week from May 17-21. Here is the lineup:

Lizze Newell has an inspiring—and bittersweet—post on Romance Through Technology:

As a reader or a writer, don't be intimidated by either male or female technology, you are as smart and technically savvy as member of the opposite sex. And they are willing to share.

Now for some steampunk action!

Don your brass goggles and adjust your corsets for SteamPink Week, hosted by vvB32 Reads. The event runs from June 4-12, 2010. If you leave a comment at the announcement post, not only will you receive a (virtual) ticket for the feature, but you’ll be eligible to win a steampunk book from the likes of Sarah A. Hoyt and Gail Carriger!

I’ll also be guest blogging there (date to be announced).

Jody Wallace (MEGAN'S CHOICE) brings the Southern fried funny with Maybelle’s Revised Character Archetypes. But what I think you’ll laugh about even more are the further adventures of Maybelle in SFR Archetypes: A Parody.

For your reading pleasure, Ms. Wallace also has an SFR short titled Dunvegas: Alien Attack! from the anthology WELCOME TO FABULOUS DUNVEGAS 2007. The collection of stories is by the authors of the blog Beyond the Veil. Download the free PDF here.

What is THE SEVENFOLD SPELL?

Tia Nevitt, proprietor of the exquisite blog Debuts & Reviews, has a forthcoming release. Her fantasy, THE SEVENFOLD SPELL, will be published by Carina Press.

Tia was one of the first bloggers to list TGE on her blogroll, and so I wanted to share her exciting news with you. Congratulations, Tia!

Who says kids don’t like to read? Rock out with the students of Ocoee Middle School to the funky video “Gotta Keep Reading” (via Pauline Baird Jones):