Firefighters In Space? Bring It On! 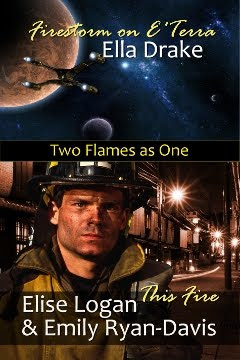 Firefighters are amazing and incredible heroes, and in my opinion we can’t pay them enough money for the types of service and rescues they provide. The same goes for police officers, emergency medical technicians, and basically everyone else in that category.

That said, despite the thrills, chills, and dangers inherent in tales about these intrepid rescuers, I probably won’t seek out any contemporary novels featuring such characters. While I can understand the appeal of romances involving firefighter heroes/heroines, I just don’t have an interest in reading about them in a contemporary setting. Nothing against such books—this is strictly a "me" thing. Recently, I began to question why I have this perception that I wouldn't find those stories appealing.

Unless, of course, the author sets the story in the future.

Now, to be frank, when I saw the cover of the anthology, it didn’t light a fire in me or under me or anywhere. “There’s a firefighter. Um, okay,” was the extent of my reaction (and I feel it’s important to emphasize again that I am in incredible awe of them in real life, and still get excited about seeing a fire engine or rescue equipment up close). But I knew Ella Drake’s story was set in the future, and based my expectations on that knowledge.

The author packs a lot of worldbuilding details into the story. I really enjoyed that aspect because I don’t know much about firefighting equipment or lingo. Plus, the descriptions sounded exotic to me. With words and phrases such as “smokejumper,” “hotshot team,” "pyroclastic," and “slapshot,” I felt like I learned something new. By putting a futuristic twist on the firefighter profession, Ms. Drake made something familiar feel fresh.

The scale of Dex and Varde’s intervention on E'Terra was another attraction for me. It wasn’t just a burning house at stake—it was a whole planet. Nigh insurmountable odds, indeed. I shiver (excitedly) to think about the numbers and sheer might that such an operation would require. It helped that there was a solid plot as well, and I could easily have sustained interest for a longer story. 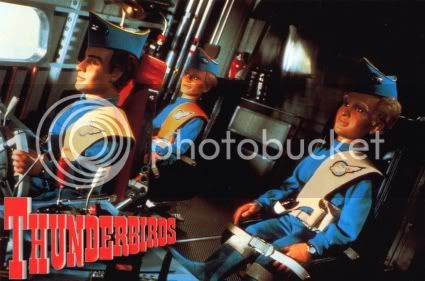 Reading FIRESTORM ON E'TERRA also took me back to the time I enjoyed obsessed over Gerry Anderson’s THUNDERBIRDS—hello, International Rescue! (I really need to blog about that show’s impact on me since I’m still a huge fan, but that’s a post for another time). At any rate, the connection is that from a young age, I was exposed to fantastical, futuristic tales of heroes and heroines performing daring feats of larger-than-life rescues. I’m wondering now if THUNDERBIRDS ruined any chance of me enjoying more traditional stories about rescuers, whether they be firefighters, police officers, or search and rescue personnel.

I think it may have, but in a good way. I like the idea of science fiction romances tackling stories of rescuers in the future, because it’s yet another way to appreciate and also celebrate their accomplishments. I’m giddy over the idea of entering an author’s vision of how rescue technology would evolve in the future, or in space. How much would change, and how much would stay the same?

So whether you’re a diehard THUNDERBIRDS fan like me, or simply enjoy firefighter heroes and heroines, Ella Drake’s FIRESTORM ON E’TERRA is sure to fit the bill.