I Can Haz Ann Somerville’s IMPEDIMENTA? 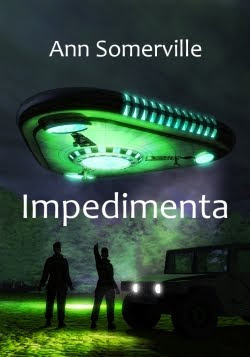 Having greatly enjoyed Ann Somerville’s INTERSTITIAL (“Love triangles. Alien monsters. Planetary war. Just another day in space.”), I was excited to learn she recently released a sequel to it called IMPEDIMENTA.

Here’s the thing: if it weren’t for the digital publishing options currently available to authors, I probably wouldn’t be able to read IMPEDIMENTA. Even digital publishers can’t (or won’t) take all of the niche stories out there. So thank goodness authors are taking initiative, because I’d hate to think what would happen if anyone came between me and my science fiction romance.

Here’s the description of IMPEDIMENTA:

You can download a free sample of IMPEDIMENTA at Smashwords, and that’s also the place where you can purchase it.

Ann Somerville also has a free sequel for INTERSTITIAL called SYNCHRONISED. So if you’re interested in checking out this series, read it in this order: INTERSTITIAL ($3.50 at Samhain Publishing), SYNCHRONISED (free at the author’s site), IMPEDIMENTA ($3.99 at Smashwords). Your total comes to $7.49 of quality science fiction romance fun!