Science Fiction Romances With "Alien" In The Title 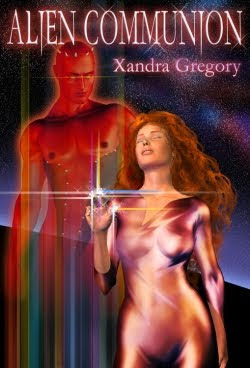 It tickles me to no end that so many science fiction romances use "alien" in the title. I'm sure it's an inevitable phenomenon given that in science fiction romance stories, aliens are more likely to wind up as the heroes or heroines. Instead of portraying aliens as villains, SFR authors tend to transform them into the good guys and gals. That's actually pretty cool given the preponderance of stories featuring invading aliens intent on stealing Earth or using humans as a food source. Or both. Living in fear of aliens can become a bit fatiguing after a while.

However, one reason I find the proliferation of "alien" in SFR titles surprising is that I--personally--don't find the word itself to be particularly sexy. Probably because I'm more steeped in the idea of aliens as invaders, usually of the lizard or tentacled variety. However, I can understand the idea behind it since the idea of finding true love with a gorgeous hunk or hunkette from the stars is a popular fantasy. It's just that sometimes I wish we had a word for aliens that sounded a lot more dashing.

Then there's what a particular author (or publisher, as the case may be) does with the word "alien." Sometimes it's clever (like a twist on a popular phrase), but other times it's just outrageously campy. Yet there are times when even the goofiest alien-in-the-title moniker promises exactly what the story delivers, and one really can't argue with that type of transparency.

Thanks to the superlatively organized Galaxy Express passenger Vicky W., I’m able to present a list of science fiction romances with the word “alien” in the title. When possible, I've provided links to either each individual author's site or to places where you can purchase the book. Books no longer available are marked with a "n/a". If you know of any others, leave a comment with the information and I'll add it to the list.

Nicole L. Pierce
Kidnapped and Spanked by an Alien
My Alien Is A Sex Fiend

Shaara
But He’s An Alien

Anthologies with “alien” in the title: