LOVE AND ROCKETS promises plenty of “science fiction and romance sittin’ in a tree” action. The collection was edited by Martin H. Greenberg, Kerrie Hughes, and Lois McMaster Bujold.

Check out the product description at Amazon:

Can you say “Squee!” boys and girls? So that we could learn more about Gini Koch’s contribution, I invited her aboard The Galaxy Express for a chat and a virtual chai:

The Galaxy Express: Congratulations on the sale of your science fiction romance short story to DAW's LOVE AND ROCKETS anthology. How did this anthology evolve?

Gini Koch: Thanks! I'm really excited to be included.

As far as I understand it, the editor (the awesome Kerrie Hughes) proposed the anthology to DAW, they agreed, Kerrie went and found authors she wanted to use and, while she was compiling, she met my agent, who suggested me, and the rest is history.

TGE: What's the title and premise of your story?

GK: "Wanted" is written under my Anita Ensal pen name. The premise is finding what you really want when you least expect it. "Wanted" is set in the future, in the Asteroid Belt. Evie's running away from something, gets stranded in the vast emptiness of the Belt, Cal saves her, and we see if they'll come together before the Galactic Police catch up to her.

TGE: Are there any special ingredients that went into the making of this story?

GK: Lots of Lady Gaga. LOL. I'm very musically oriented for writing, and for whatever reason, it was All Lady Gaga, All the Time, in order to get this story written and written well. My husband now never wants to hear "Paparazzi" or "Speechless" again.

TGE: What were the joys—and challenges—of writing a science fiction romance short story as opposed to a novel?

GK: OMG, do we have the time for the challenges? LOL

Well, I'm a natural novelist. I have no issue writing long, and novel structure comes easily to me. I enjoy writing shorter fiction, but it's much, much harder. For the LOVE AND ROCKETS anthology, I truly had 15 false starts before I hit on "Wanted", including one I was really happy with that I submitted to Kerrie. We talked about what she didn't like about it (felt like it was from a novel universe instead of being on its own) and I went back to the drawing board. Once I hit on the "Wanted" story, even that went through a variety of revisions. When I finally realized whose POV the story needed to be in, though, it flowed easily from there.

The joy was being able to create a love story that resonated with a limited number of words, while also creating a world that feels real. This is a quieter story, very focused on deeper emotions, and I really enjoyed it, and the characters. I can honestly say I fell in love with Cal while writing him, and I hope readers do, too. 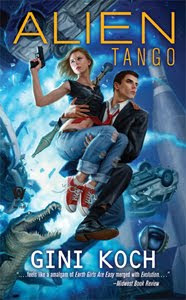 TGE: What's the release date? Where can readers find the anthology?

GK: Release date is December 7th (yes, the same day as ALIEN TANGO* releases. December's gonna be busy for me!). You can find LOVE AND ROCKETS in all the major bookstores wherever DAW books are stocked and it should be available online as well. I don't know if there will be an ebook version, though I'd guess there will be.

TGE: What else can readers look forward to from you in the near future?

GK: Well, December 7th has LOVE AND ROCKETS along with ALIEN TANGO releasing. Then on January 4th, 2011, I have another Anita Ensal short story, "Being Neighborly", coming out in another DAW anthology, BOONDOCKS FANTASY, this one edited by the wonderful Jean Rabe. It's not SFR, but I really love the characters in Being Neighborly, and hope readers will, too. And the lead story in Boondocks Fantasy is from Gene Wolfe, so the company is amazingly awesome.

April 5th is when the 3rd book in my Alien series, ALIEN IN THE FAMILY, releases. And then ALIEN PROLIFERATION is coming in Winter, 2011. So, it's a busy time for me, but I wouldn't have it any other way!

To learn even more about the anthology, read this interview with editor Kerrie Hughes at Flames Rising.

Now, it gets even better: LOVE AND ROCKETS will come hot on the heels of SONGS OF LOVE AND DEATH (November 16), an anthology edited by George R.R. Martin and Gardner Dozois. SONGS features a science fiction romance story by author Linnea Sinclair, among others. (Read more about Ms. Sinclair's "Courting Trouble.")

As far as science fiction romance anthologies, seems like we had a drought for a while, and then, Boom! —an explosion of growth. Okay, maybe not an explosion, but definitely some grand fireworks.