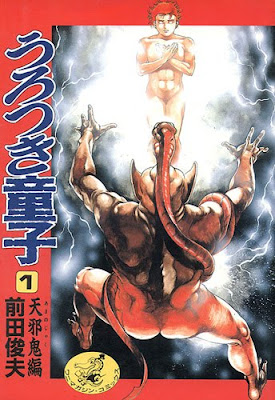 My first encounter with exotic—and erotic—penile appendages was in the 1989 anime Urotsukidōji: Legend of the Overfiend (based on the 1986 manga). Urotsukidōji is a mix of erotica, humor, and supernatural horror. It’s loaded with not only tentacle sex, but also kinky penile appendages galore.

Which brings me to the present. All of the above came to the fore of my mind while reading TRUE BELIEVERS by Maria Zannini. It’s not a spoiler to share that the hero, Taelen, is as generously endowed as his forebears in this regard. He’s an alien, after all! But not to worry—Taelen has other physical characteristics that mark him as otherworldly.

Seems that in the case of science fiction romance, extra special penises serve double duty: they are both a worldbuilding element and a way to make humanoid aliens sexy. Given reader expectations for the subgenre, I almost can’t imagine one without the other. But is the pairing absolutely required? 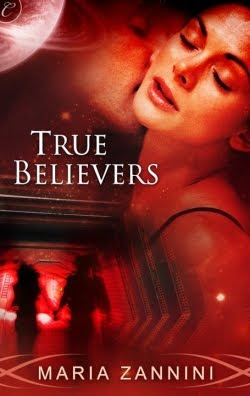 In TRUE BELIEVERS, heroine Rachel Cruz is a Nephilim, so as an otherwordly being she acclimates easily to Taeren’s alien biology (at least, that was my take), but what about a human heroine? How does an alien hero introduce that aspect of his sexuality? When would be the most appropriate time? How might they determine physical compatibility (assuming a multi-tasking penis hadn't been contrived simply for titillation’s sake)? I mean, would some of those extra tentacles even fit?!

I’ll admit, based on what I’ve encountered in my entertainment so far, I’m kinda curious to find out for real…!

But depicting an alien hero with extra tentacles or other accessories can be a challenge to pull off without resulting in a BARBARELLA type farce. Incidentally, I recently finished SLAVE (Book 1 of the Cat Star Chronicles) by Cheryl Brooks, and this story also features a hero with an exotic penis. In the beginning of that story, the heroine (a human from Earth) sees the hero’s unusual penis almost immediately as a result of his status as a naked slave. She finds it intriguing, but I attributed her almost blasé reaction to the story's lighthearted tone.

Also, SLAVE tended to fetishize the exotic alien hero trope, which meant there wasn't much more of a takeaway theme/social commentary/sci-fi concept. The hero was reduced to nothing more than his ability to pleasure the heroine (and by extension, the reader). Reading SLAVE left me awfully interested in reading a more serious treatment on the subject.

I’m sure penile enhancements of the alien kind aren’t for everyone, and I totally understand if you don't want to go there. Still, I’d like to know what your preferences are for alien SFR heroes when it comes to their sexual anatomy. Is this something you’d rather not worry about, or do you want every possible exotic detail an author can create? When is exotic too exotic? Conversely, are some of our alien SFR heroes not sexually exotic enough?