I came across a blog post by Mrs. Giggles from December 2010 in which she discussed being “bored with things at the moment”:

Now, I agree that blogs can do whatever they want, but sometimes, I do wonder because it's like the same 5 people or the same 5 titles get featured on every major blog out there in a certain period of time. Is it because of the freebies from Netgalley and such? But come on, I'm sure we all read something that we buy on our own, something outside the Big Book of the Month selections, surely? Maybe we need more of those.

Regarding that last sentence, why, a truer word was never “said” about science fiction romance, heh heh heh. I jest, but her comments point to how easy it is to succumb to blinders when selecting books. To be sure, it’s more difficult to remove them when some books (e.g., bestsellers) are more accessible to readers than others.

When I read the above passage, I started feeling pretty warm and fuzzy since here at The Galaxy Express I strive to uncover a variety of science fiction romances whether they are written by established authors, debut authors, well-known authors, or little-known ones. My selections for the blog are subgenre-based, not author based.

Plus, SFR has so much diversity to offer that it’d be a disservice to readers if I focused on the “same 5 titles.” I also like digging up or being tipped off about obscure titles because you never know what you might find. Or who might like them. 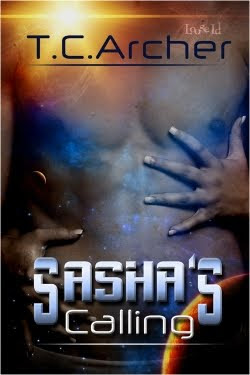 But first, here’s the story blurb for SASHA’S CALLING:

Nothing can stop freelance thief Sasha Smirnov from saving her planet -- except, Dirk, the gorgeous ambassador with polychrome eyes. Is it lust or designer pheromones? He is hot, too hot to resist -- or forget. A single, sizzling kiss burns him into her memory, and her body, but she can't afford to stop for passion, let alone love.

Sasha needs to get as far away from Dirk as possible and take the classified data she stole with her. So she stows away on a ship outward bound, only to discover Dirk's the pilot. Now she can't get away from him, or the system, but he will let her into his bed...

Read on to find out the adventures to be had with Omegatrons, boob enlargement cream, and retro-viruses:

TGE: Your heroine, Sasha Smirnov, is a freelance thief. What kinds of things does she steal?

T.C.: Sasha specializes in corporate espionage. She steals everything from information, to prototypes, to limited production items. Her mission in the beginning of Sasha’s Calling is to steal the DNA sequence of a retro-virus developed by the Centorian Cartel. She contracted this job from Orson Gno, a bio-enhanced thug, who deals in anything that will make him money--which leads to getting him sex.

TGE: Based on the blurb and excerpt, the story sounds volcanic hot. Will readers need protective clothing of any kind while reading it?

T.C.: It’s definitely advisable to protect oneself from bodily fluids, though not necessary if one is alone or reading the book with a couple of very good friends. Men should have their doctor’s number ready if they believe the commercials about calling their doctor if they experience an erection that lasts more than four hours.

TGE: Where can I buy an Omegatron?

T.C.: The Omegratron is available for sale at some specialty gun shops in lawless communities. The weapon is outlawed in five of the seven galactic sectors because Omega radiation can’t be deflected by the legacy Empirical battle armor. However, they cost more than a used runabout. Sasha won hers in a poker game when she drew a flush that beat the other guy’s two-pair.

TGE: Dirk, the hero of SASHA’S CALLING, is both pilot and ambassador. Can he cook, too? What else should readers know about him?

T.C.: Dirk can certainly cook--well, he can take the heat in the kitchen, or anywhere else, for that matter! Besides the fact he has a Ph.D. in accounting, Sasha is convinced he uses designer pheromones that excite uncontrollable amorous feelings in her. From the first kiss, she can’t stop thinking about him, and he won’t let her get away. Aside from his determination to set Sasha on the right path, he’s a single father doing what he can to provide for his daughter and set a positive example.

TGE: Conflict in science fiction romance means excitement. How many arguments do the hero and heroine have during the course of the story?

T.C.: Sasha and Dirk are at odds throughout the entire book--even in bed. She must steal that retro-virus, and he refuses to be her accomplice. This core clash drives the main thrust of the conflict. He’s a member of organized politics, and she a freelancer working outside the law. He has a code of conduct, and she does what it takes to survive. These differences force her to her steal his ship, and motivate him to withhold information to protect her. He also likes to have fun, and she’s so very serious, so she doesn’t see what’s coming when he uses boob enlargement cream instead of the reduction cream she asked for.

T.C.: Shawn: I'll date myself here, and surely get some laughs, but some of my favorite romantic sci-fi books are Edgar Rice Burroughs' John Carter of Mars. I cut my teeth on those, and nothing has ever beat them. Evan did turn me onto Connie Willis' To Say Nothing of the Dog, and I fell in love with the book. Babylon Five is also one of my top favorite series with romantic elements--remember Sheridan and Delenn? That was a love story to span space and time. Star Wars is my long-time favorite movie. No good space opera is complete without love.

Evan: The Time Traveler’s Wife by Audrey Niffenegger and To Say Nothing of the Dog by Connie Willis are my two favorites. Babylon 5 and Star Trek are two favorite television shows with romance elements. And who can forget Star Wars and the love between Han Solo and Princess Leia?

T.C.: Our next story takes place on a vacation resort where guests can purchase a fantasy adventure as part of their vacation. Our heroine is there for some well-deserved rest and relaxation and is caught up in the hero’s spy missions. What she doesn’t know is that her boss paid for a little extra adventure for her that keeps her and her new lover very busy in and out of bed.

T.C. Archer, thanks for your time, and for your art.

One more thing: In her post, Mrs. Giggles put out a call for recommended reads: "Tell me about a good book you have read recently that wasn't already mentioned ten times in the last two months!"

If anyone wants to jump in here with a recommended science fiction romance title, leave a comment and I'll port the list over to Mrs. Giggles.