Who doesn’t love a man or woman in uniform? Especially, I might add, those worn by characters in a space navy of some kind. There’s something deliciously appealing about a well-designed uniform, and even more so if it’s in a science fiction/science fiction romance story. In film, the costume designers are responsible for bringing something fresh and futuristic to military duds. In books, of course, it’s all up to the author regarding how to describe them.

Over the years, my fascination with characters in military uniforms has been bordering on a fetish. After all, I’ve been known to salivate over heroes dressed like this:

Bring it home, Kodai!* So frankly, anything with even a bit more style than that retro 70’s futuristic flair is a win in my book.

I’d been looking forward to Lisa Paitz Spindler’s THE SPIRAL PATH for some time. So when Carina Press offered to send me an eARC, I was like, “Where do I sign?!”

Now, I should probably be blogging about the story’s unique, original setting. And Lara Soto, the space pirate heroine (you know how I feel about them). Hmm, and also the nice details like “exotic matter” that make the skiffy elements both intriguing and accessible. Oh, right, there’s also the Chimerans and their special abilities. And so on. 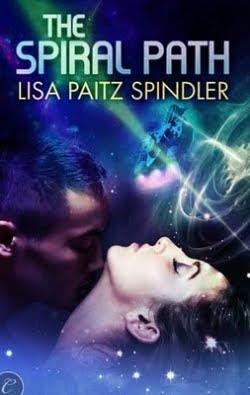 Well, sure, I could blog about all of that…if a certain military uniform didn’t keep making my heart beat so rapidly with its seductive call. Read the following (non-spoiler) excerpts and you’ll see why I was powerless to resist:

“Mitch Yoshida, in his perfectly groomed black Union uniform—pulling just so over those broad shoulders…”

“Rigged out in dress blacks that included several honor decorations, he moved through the room with ease.”

I mean, hot diggity dog! Did this author nail it, or what? I felt like she wrote the story with me in mind—me and all the readers who have been looking for more uniform action in their science fiction romances. It’s a shame Mitch couldn’t have been wearing his dashing outfit on the book’s cover. If I hadn’t known anything about the story, seeing him in dress blacks on the cover would have been like beckoning me to my favorite milkshake evah: rich chocolate ice cream mixed with smooth caramel and a double shot of espresso.

However, my attraction isn’t just to the character in the uniform (and for the record, I've gone gaga over both male and female characters wearing one), but also to the uniform itself. The details are very sensuous, in a way that, for me, goes beyond their promise of sexiness and romance. The depiction of a military uniform in such a way offers a romanticized vision of the military in space. It’s a little bit glamor, a little bit larger-than-life. I’m sure it’s not for everyone, and I like the gritty stuff, too, but this approach captures the romanticized tone I enjoy experiencing in science fiction romance.

In other words, that’s a fancy way of saying I think Mitch’s uniform is cool!

Have you come across any cool uniforms lately?