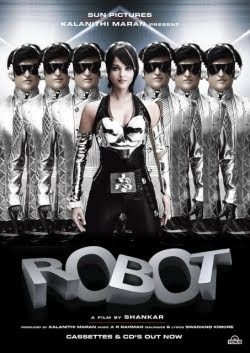 Ever since watching—and blogging—about LOVE STORY 2050, I haven’t been able to get that film out of my head. I’ve gone back and watched a few scenes again, and the opening music has been haunting me ever since that first fateful viewing. All of which made me realize I’m really hoping for another film like it, only much, much better.

Enter ENDHIRAN (2010), a.k.a. ROBOT. This Tamil film stars Indian megastar Rajinikanth and was dubbed into Hindi. As for the premise, the IMDB entry tells us that “A gifted scientist constructs an equally gifted robot, who sets out into the world for the first time with some unexpected and mind-blowing consequences.”

Keep in mind, this is not a "Bollywood" film, which usually signifies a "Bombay Hollywood" film shot in Hindi; instead, ENDHIRAN was shot in Tamil, which is mostly relegated to southern India. (Fun fact: "Kollywood" derives its name from mixing "Kodambakkam," a section of Chennai, with "Hollywood.") I mention this significant fact since ENDHIRAN is now the highest grossing Indian film of all time--despite having been shot in a language the minority of the population speaks.

Now, at first glance, this appears to be a straight SF film. But it isn't, really. There is a strong love interest added to the mix. Said love interest is played by Aishwarya Rai, a former Miss World (1994). Coincidentally, Aishwarya Rai’s character is named Sana, which was also the name of the heroine in LOVE STORY 2050! Yes, I’m easily excitable like that.

Hmm, strong elements of science fiction + romance = topping the box office? Now where have I seen that equation before? Oh yes, I remember....! ;)

At any rate, I just have to share the two clips with you. Yes, they spoil much of the film, but believe me, that won't be a deterrent once you get your hands on the DVD. However, I must urge extreme caution. While ENDHIRAN is very different from LOVE STORY 2050, I’m not sure you’ll find it much better. Entertaining, on the other hand? Heck, yeah! This is the water cooler film of the year. But I feel obliged to issue a warning about it:

This film contains the ultimate in cartoon violence, derivative concepts from films such as THE MATRIX, TERMINATOR, and TRANSFORMERS, (not to mention Japanese monster movies), bizarre action scenes that defy every law of physics, an android boogie that puts Dancing with the Stars to shame, the android hero suavely defending his girl while out on a date, extreme roller skating, and visuals that will make you feel as though someone turned your brain inside out. In a good way.

Experience the bliss that is ENDHIRAN:

(the first clip contains the most romance-y elements)


Honestly, who wouldn’t love a hero that can not only communicate with mosquitoes, but oh-so-tenderly swipes the little buggers from your cheek before they can suck out all of your blood?

Learn more about Rajinikanth, the man superman behind ENDHIRAN, in this Slate article (via a comment at SF Signal).

Was it good for you?