Watching THE ICE PIRATES: Like Being Dipped in Acid 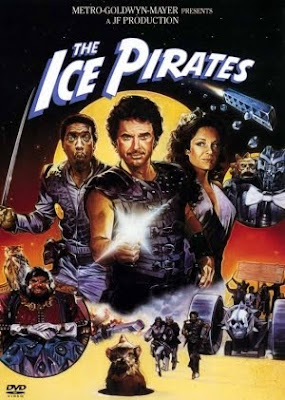 The other night, I was down with a bad cold and had to take a break from being online. However, the night was young and I wasn’t tired enough to sleep. Having recently moved my DVD collection out of storage, I began rifling through it to find a film that wouldn’t require much brainpower. When I saw my unopened copy of THE ICE PIRATES (1984), I pounced.

I’d known about this film for years, but inexplicably, had never seen it. I knew nothing about the plot, nor had I seen the trailer. I had always assumed it was your basic action-adventure SF B movie. I mean, the title told me all I really needed to know, right?

This turned out to be one of the few times that a little foreknowledge would have been a good thing. THE ICE PIRATES is indeed action-adventure sci-fi—with a prominent romance to boot—but what I utterly failed to comprehend was that it’s also an out-and-out parody. Boy, did that ever make for an excruciating viewing experience.

It seems that in the future the galaxy has gone dry and water is the only thing of value. Jason leads the band of pirates that this movie focuses on. He and his men steal ice for a living. His right-hand man is Roscoe, a proud African-American pirate who is also the chief robot builder and technician. Together with the rest of the group, they launch daring raids against the wicked Templars, an arrogant and ruthless race of people from the planet Mithra, and their fleet of water hoarding ships. The Templars' aim is to stockpile all of the water for themselves to maintain power and control over all who inhabit the galaxy.

Jason and a few others from his group are taken prisoner after a botched raid on a Templar ice ship at the start of the film, but not before he attempts to kidnap Princess Karina to hold her for ransom. The rest of his crew manages to make it back to the Pirate Moon via their cool ship which is able to split into 3 separate sections (wouldn't the crew of the more modern Enterprise be jealous) and the recently freed Karina secretly sees an opportunity to make use of the captured pirates to her advantage. She needs them to help her find her father.

Did you catch that first line? Yep, the whole galaxy has gone dry. This fact is revealed in the first few seconds, but it didn’t make me laugh. It just made me mad. Unfortunately, it was the first of many such eye-rolling spoofs.

I’m not going to relive it alone, either. Here’s the trailer for your viewing pleasure, har har:

I know. I should have watched the trailer first.

A few things riled me up like crazy. Surprisingly, it wasn’t the planet of unicorn-riding Amazons (they were pretty hot. The Amazons, I mean). It wasn’t the low-budget production because that I can overlook if the story’s at least half-way decent. It wasn’t the lampooning of seemingly every science fiction film in existence. Nor was it the craptastic special effects.

A big one is that the movie flaunts its rotten hide before a cast that includes a few really good actors: Robert Ulrich, Anjelica Houston, Ron Perlman, and John Carradine. I cry for them is all I can say.

Another item that really got my goat was the appearance of Bruce Vilanch, who played a dingbat nonsense character named Wendon. Sorry, not a fan of that schtick here. Once I hit that scene, I realized just how blatantly unfunny the film was. I’m not opposed to sci-fi parodies (hello, GALAXY QUEST). I’m opposed to badly executed parodies. THE ICE PIRATES tops the charts in that regard.

One quote from an Amazon review of the film got me thinking: All in all, only hard core cult movie fans will enjoy this unflushed toilet of a film.

I consider myself hardcore, but apparently even I have to draw the line somewhere.

Still, one element that I sincerely did like about THE ICE PIRATES was that the two main female characters—Princess Karina (Mary Crosby) and Maida (Anjelica Houston)—are actually equal in their respective abilities to the male characters. Karina has one scene of notable cunningness in which she outsmarts Jason, while Maida shines in a moment of sensational samurai swordplay (for a sub-par B-movie, that is). The movie exceeded my expectations regarding their roles and I can’t help but wonder if that was intentional or a happy accident? For a campy sci-fi parody that’s ridiculous in the extreme, I found a few of the scenes with their characters to be pretty subversive.

The film also contains a spoof-aricious love scene with outrageous double entendres that while not gut-busting, induced a reluctant chuckle or two from me.

One final reflection: I thought it was interesting that this sci-fi “comedy” is so unfunny it failed to alert me to the fact that I should adjust my expectations accordingly. In some ways, perhaps THE ICE PIRATES took itself a little too seriously.

Have you seen this film? Got any memorable memories to share about the experience?