I love my Kindle. Because it’s easy and relatively inexpensive to buy books and because of that very nice ‘sample chapter’ option, I find that my reading has become much more adventurous. I’m particularly enjoying the fact that I can try out some older books that I’m unlikely to stumble across in a bookstore. One such recent read was Jacqueline Lichtenberg’s ‘Dushau,’ the first in the Dushau trilogy, which also includes ‘Farfetch’ and ‘Outreach.’ There will be a few spoilers coming, so click away if you are allergic to them. 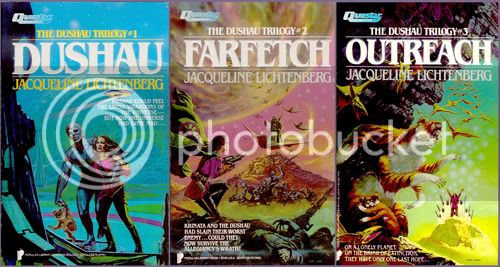 Published in 1985 ‘Dushau’ tells the story of Krinata, a human research scientist, who works with a species of beings called the Dushau. When Krinata’s Dushau colleagues are scapegoated and imprisoned as a political ploy by the Allegiancy’s Emperor, Krinata breaks ranks, busts them out and flees with them. Many adventures ensue as Jindigar, a Dushau prince, and Krinata dash about the universe rescuing Dushau and their allies from certain death and trying to find safe haven for the survivors.

It was a fun and engaging read. Being that it won the Romantic Times award for Science Fiction in 1985, I was curious to see how Lichtenberg handled this particular romance. The Dushau, though somewhat humanoid in their appearance (they walk upright, they have arms, legs, etc) are also much larger than humans, are blue, and covered in soft fur. Romances with aliens who are so similar to humans that the differences are imperceptible are all very well. Lichtenberg doesn’t go so easy on herself. The Dushau are almost immortal, as well as having telepathic powers, and have an ancient culture than no human has come close to understanding. I loved the detail that they are evolutionarily descended from carrion-eaters. Humans, as predators, simply cannot grasp their mindset. Fascinating stuff!

I was also curious to see how this early science fiction romance compares to the more recent releases in this genre. There are differences, to be sure. Being that it’s a trilogy, Lichtenberg seems to have all the time in the world to develop the relationship between these two very different individuals. By the end of the first novel there is still no discernible love affair going on, but the growth of friendship, trust and mutual respect is lovely to behold. This couple has to work really hard to understand each other and the book can get kind of wordy in places as they struggle to do so.

In more recent science fiction romances, lust has usually reared its head by the end of the first chapter, if not the first page, if not the first sentence. Quite a difference. In ‘Dushau’ Krinata is horrified by the rumors that swirl after she is seen innocently leaving Jindegar’s cabin. It hasn’t even occurred to her that their relationship might be evolving into a love affair; she just knows she cares for him, admires him greatly and is prepared to die to save him and his species. I found the purity of their relationship, well...moving. I admired and respected them both. I hoped that, if not their relationship, then their friendship would survive and thrive, that they would both live long and be happy.

I’m looking forward to the rest of the story. And just look at these covers. Call me a geek, but I think they’re gorgeous. They have a definite sci fi appeal, promising adventure on a grand scale. I’m tempted to buy the trilogy in paperback just for the geeky pleasure of having them on my bookshelf, though they’re all available on Kindle. Yeah, I’m a bit of a collector.

Jacqueline Lichtenberg can be found all over the place. She’s one busy lady. She blogs regularly at Alien Romances, she’s on Facebook, and has a website. There is also a passionate discussion group of her Sime-Gen Universe on Facebook.

Diane Dooley blogs about writing, stuff and nonsense and has a science fiction romance novella, Blue Galaxy, being released by Carina Press in May, 2011. Her alter-ego, Agent Z., is a regular contributor to The Galaxy Express.