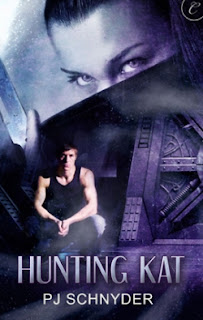 HUNTING KAT – PJ Schnyder
As a mercenary, Kat Darah doesn't have to pass for a normal human. On the edge of the solar system, she's just another biped. Most of the time.

Nearing the end of his military tour, Lt. Christopher Rygard debates the idea of hanging up his uniform for good. Looking for answers at the bottom of a glass of scotch, he meets Kat. One shared night of mutual desire seems harmless. But when their tryst is interrupted by attackers hunting Rygard, Kat must reveal her other form, the predator beneath the human façade.

Together they embark on a dangerous mission—a race against time to meet the enemy's demands, while trying to deny the passion between them. Rygard is faced with a terrible choice in the face of duty: Report the existence of a human turned shape-shifter. Or forget he ever met her.
Read the excerpt. 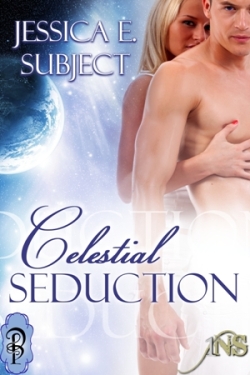 “Celestial Seduction” - Jessica E. Subject
At the end of his obligated commitment to the Space Service, Frey Berger decides to stay on Earth to further experience human emotions rather than return to Ginnun where his intended has already mated with another. Looking for real love and someone to accept him for what he is, Frey enlists in Madame Evangeline’s popular dating service. Although he does not understand the concept of a one-night stand, he hopes to find his perfect mate.
Carrie Cooper’s husband divorced her for someone who could provide him with children, leaving her with little self-confidence and no desire to let a man hurt her again. Her best friend convinces her to join a dating service, claiming Carrie needs to get laid, while not winding up with a broken heart since her date requires no commitment after the night is over.


Although several misunderstandings nearly derail them before the date has even begun, Carrie and Frey end up becoming closer than they ever believed possible. Still, Frey will need to convince Carrie that her perfect mate isn’t human at all, and that one night can lead to a forever love.
Read the excerpt. 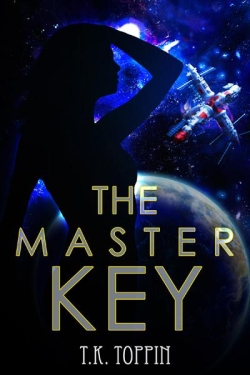 THE MASTER KEY (romantic SF) - T.K. Toppin
The second book in the trilogy, The Master Key spins a tale of mystery and intrigue as Josie’s life is now thrown back into her past.
All is not idyllic as Josie begins her new life in the future as wife to the world president, John Lancaster. A dangerous man from her past returns — Michael Ho — to wreck more havoc and destruction. With him, Ho brings a hostage, Margeaux, who turns out to be Josie's great-niece. He demands a trade off — a keycode for the life of her niece.
As revelations of Josie's past, three hundred years ago, begin to unfold, every question she has ever asked is answered. Together with John, and head of security, Simon, they head to the Scrap Yard, a cybernetics space station where they battle it out with Ho who is hell-bent on taking control of the world.
Can Josie save the life of her new-found niece? Will learning the truth of her past and family really be enough to put the ghosts to rest?
Read the excerpt. 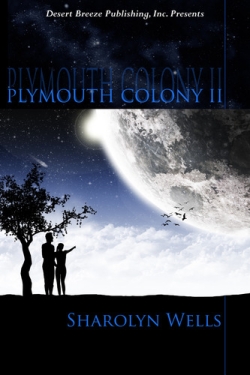 PLYMOUTH COLONY II – Sharolyn Wells
Teris Keyes and her brother Eric are two of the few ‘lucky’ humans to escape the destruction of earth through the help of the Kelkani, who plan to use the humans to repopulate their dying empire. Stuck in an intern camp on an alien world, mourning the loss of all she once loved, Teris finds comfort in a romance with Camp Commander Kovar Not.
The Elite of Kelkan don’t want this human contagion in the Kelkani bloodline, however, and the emperor compromises by exiling all mixed couples to a remote subcontinent. But that’s not enough for the Elite—especially their leader, Raetin Dare, who vows to make an example of them all. He kidnaps Teris to make her a public example. Teris must not only survive until Kovar can rescue her, but she must protect their unborn child.
Read the excerpt.
Forthcoming releases
Authors Anah Crow and Dianne Fox contracted with Carina Press for their sci-fi romance RUNAWAY STAR. The release is slated for January 2012. Here’s a description of the book from their announcement post at CONTACT – Infinite Futures:

Runaway Star is a space opera romance set in a far future in which humanity has colonized the moon and built several free-floating colonies at Earth’s LaGrange Points. It’s intended to be the first in our Pandora Project series, following a variety of scientists and soldiers through the process of discovering, locating, and exploring an alien ship they’ve named Pandora.

Flying celebrities and politicians around in an old two-seat training Harpy is far from glamorous, but Sender is always happy to put in extra work, even if it makes his squad late for their weekend pass.
His new passenger is Elios Campbell, a linguist and the protégé of one of the Pandora Project’s founders. Elios is attractive and intelligent, but Sender is set to walk away, except his best friend can’t pass up a shot at a potential date—on his behalf.

Each of them has reasons to avoid a relationship but they can’t stay away. Great chemistry becomes true love.

Shades of THE SUPER DIMENSION FORTRESS MACROSS, anyone? Will be interesting to see the authors’ take on the alien artifact/ship angle.
Pauline Baird Jones’ FALLING ASHE, the next book in her Project Enterprise series, will release November 2011.
Carina Press has contracted Kim Knox’s BITTER HARVEST, a near-future, post-apocalyptic m/m romance. Look for this e-novella in early 2012. Here’s the unofficial blurb:

Lieutenant Robert Sutton has survived by luck, his wits and a chance mutation. The pheromones of the infected—how they first pull in their victims—has no effect on him.  Or so he thinks.  He’s survived on the emptied streets of London for years, but now the infected are closing in.  They will have the last humans for themselves.
For Sutton, and the people he cares for, time has run out.

So the capture of Nicholas Rider is too convenient.  A man who’s survived the nano-virus that’s almost destroyed the planet, a man whose striking sexuality wraps around Sutton.  He’s a trap.  He can’t be trusted.

Yet Sutton can’t resist him and it could mean the end of his world.

Suzanne Brockmann will start hardcover series beginning with “Born to Darkness.” The concept is that in a slightly future Earth we have tapped into the full extent of our brain and thus are faster, stronger, with telekinetic powers.

Would you say this series sounds like it has a superhuman sci-fi angle? If so, I'm curious about how the author will describe the genetic enhancements.
Upon Laurie A. Green’s return from the 2011 RWA Conference, she asks Could SFR Be The NBT And How Might We Get There? Lots of brainstorming happening there, and more input is welcome.
Author Joyce Chng explains why the "Women in SF" conversation is far from over in On The Russ Pledge:

As some of you will know, I am from Singapore. I am a woman and I write SFF. When it comes to SFF in Singapore as a genre, you get crickets chirping. No doubt there are anthologies dedicated to the promotion of speculative fiction, but the general reception of SFF in the literary scene has been chilly. For a start, there are people who write SFF here: Dave Chua and the Happy Smiley Writer’s Group, to name a few. We are trying to get SFF recognized as a legitimate genre. [Note: We have Han May who wrote Star Sapphire, a SF romance...].

Malaysia also boasts KS Augustin and Zen Cho. Women SFF writers, by the way.  Even the Philippines have a good group of women SFF writers like Eliza Victoria.

Why am I so angry still?

Because Southeast Asian women SFF authors (and others from non-English speaking countries, mind you!) do not factor in the overall debate. Not. At. All. We are “World SF”, but other than that – nadah. I hate to bring in the SFF publishing scene: we just don’t sell at all. The publishing industry has iron gates which we can’t even climb. The US and UK communities (because They Matter) will keep on supporting traditionally published authors (Big Publishers Win, yes?). But as for the rest of the world, we are not in the equation. Diversity is an ideal. The big-wigs spout promises about welcoming minority writers. Yet I don’t see it happening at all. Remember RaceFail? Remember? The iron gates are still there.

Joyce Chng was kind enough to hunt down a link for me to Han May's STAR SAPPHIRE on Goodreads. I'll work on gathering more information. Maybe I'll be lucky enough to read it one day! In the meantime, here's the cover: 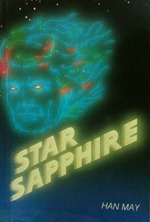 Authors blogging
In Back yard aliens? Not really…, Kim Knox describes her run-ins with “…The Fermi Paradox and the Drake equation”:

The Fermi Paradox is the contradiction between a high estimate of civilisations beyond Earth and the complete dearth of any supporting evidence, as in ships, probes or contact. Exploring why the paradox exists is fun in the writerly way.

Jacqueline’s Big Love Sci Fi series continues with Part II: The Drama of Illness in Fiction and Part III: How Big Can Love Be in Science Fiction? Here’s an excerpt from Part III, but I encourage you to read the entire post because Jacqueline serves up a lot of good insights for both readers and authors of SFR:

So how "big" can love be within SCIENCE FICTION and still stay in the science fiction genre?

How much science does it take to ruin a Romance?

Well, just look at that bikini picture in that advertisement I referred to above.  If it's not available, close your eyes and imagine, then imagine that tiny scrap of cloth as the science.

It isn't the "amount" (or number of words devoted to) either science or Romance that makes the story work or not work.

It's all in how the story elements are orchestrated (yes, it's an artform!).

Fun tag line
I thought this tag line by author Joy Shaw did a good job of capturing SFR:
“Embracing The Future One Kiss At A Time”
Movies
THE ADJUSTMENT BUREAU Blu-ray release knocked it out of the park last month:

For the week ending 06/26/11, The Adjustment Bureau bowed on top of the Blu-ray and the overall sales charts. Bureau, was made with a production budget of $50 million and managed a modest domestic total of just over $60 million. Facing strong competion from fellow debutant, Unknown, the Matt Damon starrer managed an 11% sales advantage over its nearest rival. Bureau finished its first week of home video release with 43% of total package unit sales coming from Blu-ray.

So far, it's earned over $125 million at the box office according to BoxOfficeMojo. My reaction to it was mixed. But maybe that kind of monetary return will encourage studios to release more SFR films, hmmm?
Submission opportunity
All Romance Ebooks is hosting its “Just One Bite Short Story Contest.” This is a potential market for SFR authors and there are some sweet prizes. Click here to read the submission information. (Link via Pauline Baird Jones)
Now, I turn the mike over to you. Got any SFR news or links to share?
Joyfully yours,
Heather
Posted by Heather Massey at 11:46 PM
Newer Post Older Post Home
View mobile version