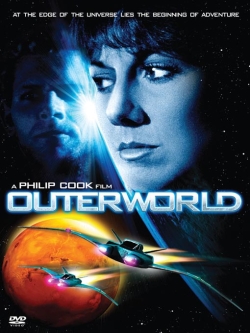 The other night, after completing a blog post, I wanted to wind down with a free, random film through Amazon’s Prime Instant Videos. My goal was to find something entertaining that I hadn’t seen, yet isn't anything I’d prefer to see on DVD rather than on my PC. I’m tellin’ ya, it’s a tough call sometimes.

I’d scrolled through numerous listings and was about to give up when I spotted the cool-blue image of a science fiction film called OUTERWORLD (1987). "Hey now, what is this little number?" I thought. This film was new to me.

I learned that OUTERWORLD, which was written and directed by Philip J. Cook (also new to me) is actually a revamped version of the film BEYOND THE RISING MOON (a.k.a.STAR QUEST). Apparently, it ran on the SyFy Channel and then went to video. From what I’ve read, the new version has CG effects as well as new scenes and tighter editing.

Anyway, the image caught my eye because of the woman’s face dominating it (because it was a thumbnail, I initially couldn’t see the man’s image on the left. More on him later). I read the description:


She was genetically engineered by an evil corporation to be the perfect emotionless spy and assassin. Now they can't control her. Asked to kill one too many times and developing feelings she wasn't supposed to have, Pentan must outwit her evil creators before they destroy her and succeed in the ultimate corporate takeover. Hailed as an ingenious sci-fi triumph, Outerworld's intergalactic battles and tale of space-age espionage will blow your mind!

Uh, “ingenious sci-fi triumph” and it’s going to "blow" my mind? Yeah, okay, so I was betting that never was a truer hyperbole ever spoken, but I was intrigued by the idea of a genetically engineered female spy and assassin—especially since her name was Pentan. Wow! And think about it—how many SF films feature a female action hero at the helm? Precious few, unfortunately. Plus, I immediately began to wonder if the film had a romance attached.

I dipped my toes into some of the reviews to search for clues. A few did not have kind words for this film at all, but then others heaped a lot of praise onto it that sounded oddly compelling. But then some of them mentioned that a male character joined the protagonist on her mission. Hmmm….

So I watched the trailer. Take a look (or look away and cover your eyes, as the case may be):

Gawd, that was like, the lamest trailer narrator in the history of lame trailer narrators. Oh, and did you happen to notice the riotously low budget special effects? Well, that sealed the deal. I rushed back to Amazon and clicked “Watch now…unlimited streaming $0.00.”

So, what did I discover about OUTERWORLD? It's a B science fiction film with a lot of charm. Emphasis on the charm, because production-wise, this film did not age well.

Despite the CG effects of the revamped version, the ships were done entirely with miniatures. As one person who reviewed it on IMDb noted, “It's like Gerry Anderson's Model shop collides with a 3D effects program that stumbles into a Roger Corman and the latest Robert Rodriguez film projects.”

Yeah, that pretty much sums it up. As a Gerry Anderson Supermarionation fanatic, I could suspend my disbelief; however, your mileage may vary. Once I got over laughing my ass off at some of the outright fail of the film’s F/X, though, I just decided to ignore it so I could concentrate on the story.

OUTERWORLD did surprise me, though, in one big respect: it's definitely a science fiction romance film, one in the action-adventure space opera mode. Overall, it felt like a 60-40 SF to romance ratio. If the romance had been removed, the story would have fallen apart. That’s how integral the romance felt to me.

Heroine Pentan is actually an anti-heroine. Her one redeeming trait is that she wants to feel love and compassion (emotions that were programmed out of her during her creation and training). She has super smarts and too many talents to count, from proficiency with weapons to fighter pilot skills. That, of course, is because she is a very fantastical character. Her main flaw resides in the interpersonal realm, namely, her inability to trust. At first, actor Tracy Davis seems to be delivering an awkward, wooden performance. But as the film progressed, I began to wonder if she had used a robotic style on purpose in order to more effectively portray an emotionless spy/assassin.

What about the hero? You just gotta love Captain Harold Brickman (Hans Bachmann)! He’s a total, unapologetic Beta. The romance in OUTERWORLD is of the subversive kind, since Pentan is the one who does all the rescuing and world-saving. Brickman gets a moment or two to shine, but mainly he plays the role typically assigned to romance heroines. Still, I really enjoyed that twist, especially since Brickman is very in tune with his feelings. He’s the one who initiates discussions of trust between them. He also accepts Pentan unconditionally, even though he's aware of her dangerous nature.

The amazing thing is that because I didn’t know anything about OUTERWORLD going in, I wasn’t sure if the romance would have an HEA. Philip J. Cook managed to cast the HEA in serious, serious jeopardy. There were actually some overwhelming odds and pretty high stakes in this film.

Don’t get me wrong, though. This is no masterpiece. It’s riddled with SF tropes and clichés, not to mention dialogue that's the equivalent of nails-on-a-chalkboard. And yet, it’s so very earnest and has a lot of heart. OUTERWORLD was probably too ambitious for its time and budget (reportedly around $175,000), but clearly, the cast and crew gave it their all.

Once I stopped giggling at the superficial flaws, I started becoming strongly invested in the film’s outcome. In the end, OUTERWORLD is very much a character-driven action film that explores the theme of “love conquers all.”

In a nutshell, here are some aspects of the film that worked well for me despite the low-budget limitations and cringe-worthy F/X:

* strong premise (in fact, this film has such good bones that it warrants a high-budget remake)
* space opera setting, including high-octane space battles
* believable romance (trust issues were a big aspect of it)
* lost alien artifact
* the film takes itself seriously
* lots of action
* badass villain
* at one hour, nineteen minutes, it’s short

And here’s a sampling of just a few of the items that took me out of various scenes throughout the movie. They won’t spoil the plot, but you should be aware of them before going in so you can adjust your expectations accordingly:

* One of the opening scenes involves a character falling into the “As you know, Bob” trap with a sentence that literally begins, “As you know…” Le sigh.

* OUTERWORLD takes place in a technologically advanced society, but when Pentan pays Brickman to charter his space ship, she pays him in cash. She even makes it a point to say she’s paying him in American dollars! I can’t begin to tell you how many times Brickman slips that wad of cash in and out of his pocket. It would make a great drinking game!

* The cinematography is so abysmal that during a scene wherein Pentan awakes from being unconscious, you can’t even tell that she’s opened her eyes.

* Our Hero wears the equivalent of Ray-Bans while flying his ship into space! What a cool dude!

* In one scene, Brickman tries to alert the authorities and report Pentan’s location. He attempts to do this via a pay phone. The kicker is, he doesn’t even have any change! Which I guess worked out for the plot because otherwise the film would have ended right there.

* During a battle, a bridge screen informs Brickman that an “ollision” is imminent! That’s not a typo—one of the F/X crew left off the “c”!!

*At the start of the climactic showdown, the villain strolls in wearing a calf-length black mink coat! Yes, he looks as good as that sounds. Boy, they just don’t make villains like this anymore.

* In another scene, a radar screen reports an incoming missile as “Metallic casing detected.” Is that classic, or what?! I can honestly say I’ve never seen anything like that before in my life.

* Some of the space battle scenes feature a few maneuvers that I'm pretty sure are in complete defiance of the laws of physics.

* Despite Pentan’s badass nature, this film features some of the worst fight choreography ever. Pentan’s karate chop attacks look like she was tickling the bad guys with a feather. Anyway, you’ve been warned.

If you’d like to learn more about OUTERWORLD, here’s an in-depth review of the film by a person who’s an obvious fan. That said, I have also joined the rank of diehard fan myself.

If you dare to venture into the mind-blowing realm of OUTERWORLD, come on back and share your thoughts!