Decadent Publishing is currently hosting a Speculative Fiction Blog Tour. In light of the event, it was a great opportunity to interview Jessica E.Subject, an author who debuted with a sci-fi romance short story called “Celestial Seduction” in June 2011. Since then, she’s been on a cosmic roll, having since contracted three more stories in the subgenre. Woo-hoo! 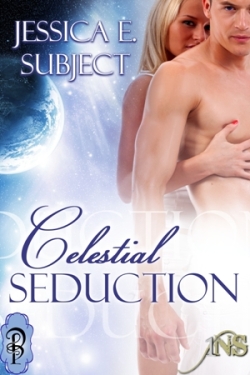 To refresh your memory, here’s the story blurb:


At the end of his obligated commitment to the Space Service, Frey Berger decides to stay on Earth to further experience human emotions rather than return to Ginnun where his intended has already mated with another. Looking for real love and someone to accept him for what he is, Frey enlists in Madame Evangeline’s popular dating service. Although he does not understand the concept of a one-night stand, he hopes to find his perfect mate. If he fails, he risks being alone on Earth for the rest of his life.

Carrie Cooper’s husband divorced her for another woman who could provide him with children, leaving her with little self-confidence and no desire to let a man hurt her again. When her best friend convinces her to join a dating service, Carrie decides one night of passion is harmless since there’s no commitment after the night is over.

Although several misunderstandings nearly derail them before the date even begins, Frey and Carrie end up closer than they ever believed possible. Still, Frey needs to convince Carrie her perfect mate isn’t human at all, and that one night can lead to a forever love.

“Celestial Seduction” is a highly romantic tale (i.e., cue the warm and fuzzies!). Frey and Carrie are very likeable and grounded despite the extraordinary circumstances. The author packed a lot of plot into the story, a feat which is often a challenge with shorts.

Frey has a distinct "Other" quality and even though I thought that Carrie seemed to accept his alien nature awfully quick (romance short story shortcut?), I interpreted her behavior as social commentary about the importance of accepting people at first glance no matter how different they look. She's totally non-prejudiced and we could certainly use a lot more people like her in the real world.

“Celestial Seduction” is a very hopeful tale and of course, since it’s from Decadent Publishing’s 1-Night Stand series, Frey and Carrie enjoy some hawt sex. Click here to read an excerpt.

Speaking of the 1-Night Stand series, it’s among the subjects (!) I asked Jessica E. Subject about in my interview with her, which starts…now!

The Galaxy Express: Please tell us about Decadent Publishing’s 1-Night Stand Series. What kinds of stories can readers expect?

Jessica E. Subject: The 1 Night Stand line from Decadent Publishing is a collection of stories by multiple authors. Madame Evangeline, the owner of the illustrious 1 Night Stand dating service matches couples (and sometimes more) from all walks of life, including paranormals and aliens, for one night of happiness. With Madame Evangeline’s magical matchmaking abilities, one night often leads to something more. For more information, visit the blog: http://decadent1nightstand.blogspot.com/


TGE: “Celestial Seduction” struck me as having a theme of unconditional love and acceptance. What compelled you to write about this theme or any others using the lens of science fiction romance?
JES: I can’t say anything in particular compelled me to write in the theme of unconditional love except my own personal beliefs. Every story I’ve written thus far deals with this matter, whether my characters are aliens, clones, have alopecia, or burns all over their face. I just don’t think love is restricted to a perfect-looking male and female. I do present these beliefs under the lens of science fiction, but here on Earth, my beliefs cover race, creed, and sexual orientation. We can’t help who we fall in love with. BUT, love does not include harming others. My beliefs do have limits.
TGE: Describe your heroine Carrie in three words.
JES: Caring, dedicated, reserved
TGE: Does Frey, the hero, wear boxers, briefs, or something else altogether?
JES: Great question! LOL When in his human form, he wears boxer briefs. When he’s able to discard the human image, he prefers to be free. ;) 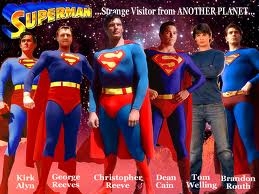 TGE: Who is your favorite sexy alien?
JES: Superman. No doubt about it. He’s been my favorite alien and superhero for as long as I can remember. Yes, I would fantasize about being rescued by Superman, and I am lucky enough to have found my very own here on Earth.
TGE: Please describe a few of your favorite science fiction romance books, films, and/or television shows.
JES: Wow, I could go on forever here. For books, I love Gini Koch’s Kitty Kat series. Each book takes me through a range of emotions, from laughing to sobbing. And that’s what I love in a book. I also recommend the futuristic In Death series by J.D. Robb (Nora Roberts). For television shows, I can’t say I watch a lot. Used to watch Smallville and Star Trek, though. In movies, there are so many. Avatar, Contact, Independence Day, Men In Black, Star Wars… The biggest thing for me is that I need more than just a story about aliens coming to Earth or the other way around. I need an emotional connection. I need to know the characters in order to enjoy the story. TGE: What else can readers look forward to from you?
JES: Besides Celestial Seduction, I also have two other short stories as part of the 1 Night Stand series. Beneath the Starry Sky is a contemporary romance, and Unknown Futures is an F/F science fiction romance. All three of them are interconnected.
Never Gonna Let You Go is a science fiction/dystopian romance story which releases January 31 from Decadent Publishing and is the first of The Underground trilogy.
My first novel, The Zurian Child, will be released with Silver Publishing this year, and is the first in my Mark of the Stars series.
I have more projects on the go as well, but nothing confirmed as of yet.
Thank you so much for hosting me today, Heather!

Ms. Subject, thanks so much for your time, and for your art.


About the author:
Jessica Subject started writing to encourage her daughter to read. Now she writes to keep herself grounded. Although she reads many genres, she enjoys writing Science Fiction Romance the most and believes everyone in the universe deserves a happily ever after. She lives Southwestern Ontario, Canada with her husband and two kids and loves to hear from anyone who has enjoyed her stories.
Website/Blog: http://www.markofthestars.com
Twitter: http://twitter.com/#!/jsubject
Facebook: http://www.facebook.com/pages/Jessica-E-Subject-author/205759796126370
Goodreads: http://www.goodreads.com/author/show/4959083.Jessica_E_Subject
Google +: https://plus.google.com/100079570422204018357/posts