An Interview With Jenna McCormick By Diane Dooley, Plus Giveaway

Diane Dooley: Congratulations on your new release, No Limits. Tell us about its journey to publication.

Jenna McCormick:  Thank you! Jenna McCormick is a recent persona. I’m actually published under my non-erotic handle, Jennifer L. Hart. Some of my books are self-published, some are small press published, a few are e-press published. Every book made the rounds with literary agents and editors, but none managed to snag enough interest to take me to the next level.  Then in September of 2010, I went on a writing retreat dubbed the Sanibel Word Orgy. This was the first time I’d ever spent so much time around other writers and it helped me to realize I was holding back. That’s why Jenna’s bio reads Born on Sanibel Island, because I really was!

Dooley: No Limits has a plethora (and a diversity, may I say) of hot sex scenes. Which is your personal favorite?

McCormick: Probably the one with Zan, the space pirate. It’s the most emotionally heart-wrenching because Gen and Rhys are having problems and can’t seem to connect and he literally drives her into the arms of another man. In the original draft this event happened behind closed doors, but when I sold to Aphrodisia I was told nothing could happen behind closed doors! Plus, I have a major crush on Zan and tend to play favorites.

Dooley: Do you write from an outline or make it up as you go along?

McCormick: I write an outline and then ignore it! LOL.

Dooley: If I gave you a no limits credit card, where would you be booking your next vacation? 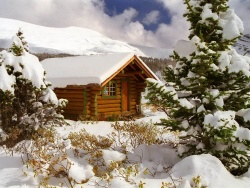 McCormick: Anywhere but here? LOL, seriously, I can have fun anywhere, as long as I have a few friends with me. Big city, cabin in the mountains, cottage on the beach. Just don’t ask me to do laundry and it’ll be a blast!

Dooley: What are the last three books you read?

McCormick: The Hunger Games by Suzanne Collins, The Reluctant Dom by Tymber Dalton and Second Chances by Lauren Dane.

Dooley: What are your writing goals for 2012?

McCormick: To do more of it! Between the promo for No Limits and the indie publishing I’ve been doing for both personas, I have not been productive enough. I’m planning to spend some serious hours just creating through this year.

Dooley: What’s the best piece of advice you can give to someone who is attempting to write for publication?

McCormick: Know what exactly you want in a writing career and then consider the different options to get you there. “For publication” means something very different than it did five years ago.

Dooley: What’s up next for Jenna McCormick?

McCormick: I’ve got the first four months of the year mapped out. January and February are pretty much nonstop promotion and writing. In March I’m teaching an online workshop From Fizzle to Sizzle: Writing love scenes guaranteed to heat up any story.

And in April I’ll be attending the Romantic Times convention in Chicago. After that, well, I need to have some product so lots more writing!

I’ll give away a copy of No Limits to a random commenter who tells me about a self-imposed limit that he or she has broken and the consequences, good or bad.  And join me for the No Limits Blog Tour and a chance to win a KINDLE FIRE!

[The deadline to enter the contest is midnight EST on January 15, 2012. Participation required for Kindle Fire contest. For details, click here] 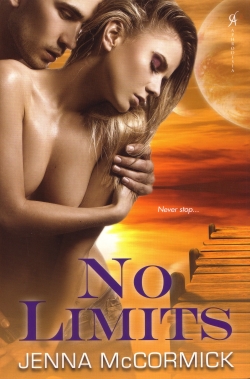 All Genevieve Luzon wants is to be loved by one man, a seemingly impossible task in New-New York City at the start of the twenty second century. Sure, she can buy sex as easily as order a pizza on a Friday night, but finding a forever kind of love among her self-centered peers is no easy feat for the unemployed off-world vacation coordinator. When an old friend offers her the position of secret shopper to test out the male prostitutes, Gen can’t think of a good reason to refuse. Hell, if she can’t find Mr. Right, she might as well try on a sampler of Mr. Right Nows.

Yet the perks of her new position don’t compare to the strange attraction she has, not for one of the prostitutes, but a candle that seems to warm places of her she never knew existed. When a man appears out of the flame, Gen is sure she's found the one. Rhys is an empath, made a slave by the Illustra Corporation and he’s everything Gen could ever want. Except available. Because Rhys is on a mission. One that might claim his life. He must try to free his people, consequences be damned. Now, Gen must choose between turning her back on the only man she’s ever loved and the monumental task he has set for himself. Should she risk her life fighting a war hidden from polite society against those who wish to control us all?
Is love really worth fighting for?

Born on Sanibel Island somewhere between the fifth and seventh bottle of Rosa Regale, Jenna McCormick writes big girl romance with a touch of out of this world fantasy. Her hobbies include scouring the Internet for the perfect pair of boots and stirring up trouble, much to the dismay of her alter ego, mystery writer Jennifer L. Hart. Visit Jenna on the web at ww.authorjennamac.com

(Diane Dooley is an author of science fiction romance and can open a can of tuna, too. Visit her blog Writing, Stuff, and Nonsense.)