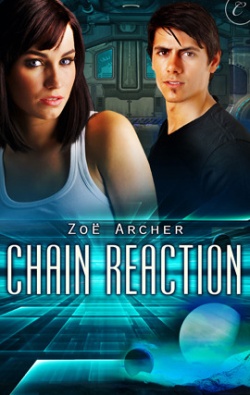 Author Zoë Archer, in a post at the Carina Press blog titled In Praise of Nerd Heroes, describes the hero and heroine of her latest release, the science fiction romance CHAIN REACTION.
What drew my attention in particular was the following part:

Of course, I’m also talking about a romance hero, so my favorite nerd heroes can also kick butt. It wouldn’t quite work if the heroine had to keep bailing him out, would it?

A fascinating question, indeed, and one I’d like to tackle. :)
My first reaction was hmmm, why wouldn’t it work? What if the heroine did keep bailing out the hero? Is such a scenario really that invalid for a sci-fi romance? Assuming a nerd hero partners with the heroine in key ways and is not a placeholder a.k.a. failed hero, what kind of story could successfully feature a kick-butt heroine and a non kick-butt nerd hero?
Let’s turn this dynamic on its head: If a science fiction romance featured a heroine nerd/scientist and a soldier hero, should we then expect that she’ll also be able to kick butt as part of her repertoire? Perhaps sometimes—or at least as often as we expect nerd heroes to have that capability.

Of course we can have SFR nerd heroes and heroines who possess both brains and brawn. Nothing wrong with that. (And I certainly don’t have a beef with Ms. Archer. She did, however, pose a question I just can’t seem to quit!)
However, I think it’s important to remember that there have been plenty of sci-fi romances where the hero does all of the saving or the majority of the saving. It seems to me that plenty of readers support that particular element in many romance subgenres, not just SFR. So why should the reverse be any different?
While I understand that having a hero save the heroine from start to finish provides a popular fantasy (e.g., of the male fantasy lover variety), I also think it should be questioned—especially in a science fiction setting where technology and possibly a progressive culture have leveled the playing field, i.e., created an environment conducive to gender equality.

On occasion, the execution of this fantasy implies that a woman can’t save herself in any way, shape, or form. It also implies that men only qualify as heroes, and by extension, only certain types of heroes. Therefore, I’m concerned that there's a perception that a nerd hero has to engage in physical heroics in order to qualify as a true hero.

Why can’t we imagine and embrace the idea of a heroine saving the hero from start to finish? I’m not saying that all sci-fi romances should skew that way; rather, I like to think of science fiction romance as a place where readers can indulge in all sorts of fantasies.
That, of course, involves taking risks and pushing envelopes (and perhaps taking one for the sci-fi romance team!).
Basically, I don’t want to rule out the idea of a sci-fi romance that successfully pairs a nerd hero with a kick-butt heroine wherein she is entitled to all of the butt kicking since that is her established role.
I’d hate to see such a heroine’s role diminished simply because of the assumption that readers can’t embrace the idea of a non-kick-butt nerd hero. They may be in the minority, but they are out there. The celebration of a nerd hero in all of his non-kick-butt glory is its own type of fantasy, and a great one at that.
For example, in Jeanette Grey’s cyberpunk romance UNACCEPTABLE RISK, the hero Edison either sits in front of a computer or tends to the heroine’s cybernetic enhancements for most of the story. He has a more action-oriented heroic moment during one scene, but not of the Super Supreme Alpha male kick-butt variety. And despite his “behind the scenes” role, I didn’t feel as though he had lost one iota of masculine appeal. He’s a great example of a nerd hero who can do more for the heroine with his brain than with his brawn. I didn’t expect anything different.
The non kick-butt nerd hero fantasy is also why I appealed to PJ Schnyder to write a sci-fi romance featuring the nerd character Boggle from her e-novella HUNTING KAT. Because Boggle is such a fun, unique character, that kind of story would be full of AWESOME.
Now it's your turn: What do you think about the kick-butt heroine and non kick-butt nerd pairing? Agree, disagree, somewhere in-between?
Joyfully yours,
Heather
Posted by Heather Massey at 7:38 PM
Newer Post Older Post Home
View mobile version