Going Beneath The Covers Of Leslie Dicken’s THE IRON HEART 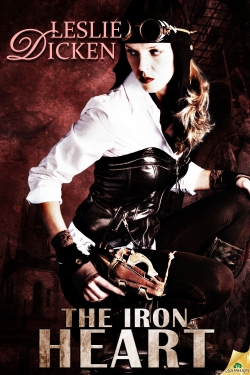 The Iron Heart by Leslie Dicken recently came out from Samhain Publishing. As a fan of steampunk romance, I looked forward to reading this book. “Iron” in the title? Check. Cool steampunky heroine on the cover? Double-check.
After finishing this novel-length ebook, I was kind of shocked that the blurb, tags, and excerpt on Samhain’s site barely hinted at anything more than the basic premise—especially given the various elements I encountered in the story. I’m already a steampunk romance devotee, but what about readers who might have overlooked this story because they lacked key information?
This is one of those times when it’s up to readers to uncover what’s really happening beneath the covers (heh!) of a romance adventure. With that in mind, I am here to tag The Iron Heart for you and present an interview I conducted with the author.
But first, the story blurb:
His greatest creation could be the death of them both.
One woman swears to avenge the savagery of a ruthless killer loose on the streets of Lundun; if only she can stay one step ahead of an inventor who fears that his greatest work, a labor of love, has turned on humanity.

Grieving the loss of her beloved cousin, Ella Wilder is determined to catch the murderer. Infuriated by the fumblings of the constable, she seeks the assistance of a handsome noble who seems to be looking for his own answers, and whose reluctance tells her he has something to hide. Over time, hesitant intimacy grows into fiery passion but brings them no closer to finding the madman.

As the killer reveals darker inventions that blur the boundary between man and machine, Ella fights the fear he may be after her next. Can Ella trust her heart to the man who refuses to share his secrets yet swears to protect her? Will Bennett be able to choose between keeping terrifying family secrets…or losing Ella to the iron-hearted killer who stalks the night?
***
You can read the brief excerpt here.
Okay, I know what you’re thinking. Blurbs can’t convey everything—because hey, that’s what the book is for—but given the stories that Samhain sells and having read The Iron Heart, I felt a few important items were missing from its book page. Therefore, my goal is to help make you an informed consumer about this book.
Below you will find a set of non-spoiler, no-holds-barred tags divided into categories.
Genre tags: erotic steampunk romance; suspense; mystery; gothic
Notable characters: A brooding nobleman inventor hero; a spunky heroine who runs her own newspaper; an eccentric, meddling old noblewoman (think: a steampunk version of Downton Abbey’s Violet, Dowager Countessof Grantham); and a mysterious steampunk cyborg.
Plot or Character-driven? Definitely character-driven.
Setting: Alternate history “Lundun.” The worldbuilding elements are just enough to give the world a steampunk feel.
Heat Level: The Iron Heart’s sizzling, steamy (!) romance edges toward a “soft” erotic heat level. Bennett Pierce, Lord Barrington, is a dark and tortured hero whose libido is unleashed by Ella’s bold nature and, of course, her luscious curves. The story is loaded with smoldering glances and raw fantasies. I would characterize The Iron Heart as a slow burn erotic steampunk romance with heavy sexual tension throughout.
Gadgets: automatons; airships; various clockwork and steam-powered devices; and an almost fetish-like attention to gears and springs.
Social commentary? Yes. There’s a bit of social commentary in the story regarding the impact of technology on jobs and the humans who might be displaced as a result. Never fear—it doesn’t displace the romance or hawt sexxoring.
Tone: On the darkish side because of the suspense and serial killer elements. They’re not gory or graphic, however. Rather, they tend toward the stylistic. The hero’s dark demeanor and shocking secret lends The Iron Heart a moody, gothic tone, like a steampunk Jane Eyre. (Mmmm…Rochester on an airship!)
Was it good for you? Awesome. Pass the hookah. Kidding! Now, on to my interview with Leslie Dicken:
What inspired you to write THE IRON HEART?
It was a chat I had with my good friend and critique partner, Lisa Paitz Spindler.  Steampunk was just starting to make a few waves in the romance world and she kept insisting it would be a perfect fit for me. I've always loved historicals and had written several and also have an affinity for science. Steampunk is the perfect blend!
The story itself came out of my research on Jack the Ripper. That whole era felt very gothic and dark and so I wanted to incorporate that into my story. I also wanted to write a Steampunk that didn't have paranormal characters in it. 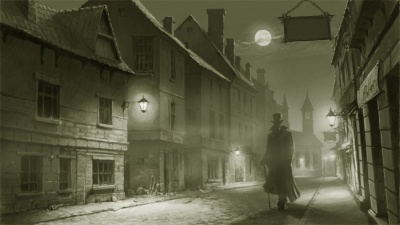 What distinguishes Bennett from other dark and tortured heroes?
Good question! I love writing dark and tortured heroes! I think what makes him different is that he believes he did the right thing, even though it may have had unintended consequences – very Frankenstein-like. He carries his burden alone, trying to right what was wrong.
Name three important facts about Ella that readers should know.
She is stubborn and sometimes fool-hardy and it has gotten her into trouble several times. This doesn't make her too-stupid-to-live, but not quite perfect and very human. She resists her upbringing in the wealthy Noble world and leaves it to live with her uncle in the heart of the city. She is not afraid of her own sexuality or her attraction to Bennett.
Do you have a favorite gadget/device you created for the story?
I love the personal flying machines. They are like a bike or motorcycle that can fly at low altitudes. How fun would that be to go up and soar like that or use it to take you places, freeing you from roads and other obstacles.
Please describe a few of your favorite steampunk/steampunk romance books, films, or television shows.

I have read a few of Meljean Brook's stories, several steampunk erotica collections, and 20,000 Leagues Under the Sea.
What can readers look forward to from you?
I have a short story coming out in April from Harlequin Spice Briefs: The Lady's Bargain.  I am currently working on a gothic historical and plan to write a sequel to The Iron Heart.
Where can readers find you?
Www.lesliedicken.com
Facebook/LeslieDicken
Facebook/LeslieDickenAuthor
Twitter/LeslieDicken
***
And there you have it. Happy reading!
Joyfully yours,
Heather
Posted by Heather Massey at 6:00 PM
Newer Post Older Post Home
View mobile version