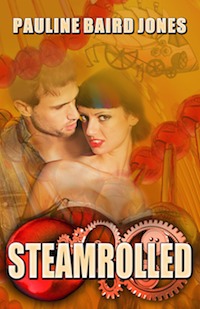 I discovered a few fun and informative posts recently and therefore would like to share them with you:

At Backward Momentum, Graylin Fox recently featured an Ode to Farscape. Seriously, there can never be too many odes to FARSCAPE.
At Paranormal Romantics, author D.L. Jackson (THIS ENDRIS NIGHT) asks What’s in a Cover? (FYI she kindly included an image of QUEENIE’S BRIGADE in her roundup!)

What I particularly like about steampunk (besides playing with goggles and automatons and airships and hosing my characters) is that it is a genre that didn’t come out of New York publishing. It came from the grassroots of readers and artists and cosplayers. It is, for the most part, a genre without boundaries and rules, one fueled by the grassroots.
Which makes it particularly ironic when anyone states that a piece of made up fiction broke the rules or isn’t steampunk because it did or didn’t have this or that.

And you can now watch the fun & quirky book trailer for KICKING ASHE, her forthcoming romantic SF release, at her site.


At (I might as well go three for three!) Spacefreighters Lounge, author Pippa Jay (KEIR) wants to know, How Alien are your Characters?

One question that my editor asked me on the first round of copy edits was why all my characters were human or humanoid. Why were there no aliens who, basically, looked more alien?
I’ll confess that until then I hadn’t really thought about it but I had a logical explanation. For one thing, when writing a science fiction romance it, of course, makes it easier if the two main characters who are due to fall in love have a fairly close physical similarity. Sex scenes would obviously be a lot more involved and, er, convoluted shall we say, if the physical differences were very marked.

When author Cheryl Morgan blogged about “Positive Discrimination,”gender balance, and SF/F convention panels, I started thinking about how the issues might affect authors of SFR who were interested in doing such panels:

Conventions come in all shapes and sizes. Some, I guess, might want to be all testosterone, all the time. Good luck to them. But most want to attract lots of members, and as half of the population happens to be female it makes sense to make them feel welcome and wanted in some way. Also, good program designers know that having a variety of different people on panel tends to make for interesting discussion. Often you don’t know a lot about some of the people who volunteer for panels, and getting gender balance is a useful way to choose between them. Smart programming people, then, will want to put women on panels. But getting that done can be hard.