Interview With WRECK OF THE NEBULA DREAM Author Veronica Scott

Veronica Scott’s WRECK OF THE NEBULA DREAM is a sci-fi romance spin on the 1912 Titanic disaster. The author is self-publishing this title to coincide with the 100th anniversary of the Titanic’s sinking.
Here's the blurb:

Traveling unexpectedly aboard the luxury liner Nebula Dream on its maiden voyage across the galaxy, Sectors Special Forces Captain Nick Jameson is ready for ten relaxing days, and hoping to forget his last disastrous mission behind enemy lines. He figures he’ll gamble at the casino, take in the shows, maybe even have a shipboard fling with Mara Lyrae, the beautiful but reserved businesswoman he meets.
All his plans vaporize when the ship suffers a wreck of Titanic proportions. Captain and crew abandon ship, leaving the 8000 passengers stranded without enough lifeboats and drifting unarmed in enemy territory. Aided by Mara, Nick must find a way off the doomed ship for himself and several other innocent people before deadly enemy forces reach them or the ship’s malfunctioning engines finish ticking down to self destruction.

But can Nick conquer the demons from his past that tell him he’ll fail these innocent people just as he failed to save his Special Forces team? Will he outpace his own doubts to win this vital race against time?

While the story is about a tragic accident involving a luxury spaceliner, Veronica Scott’s story delivers a Happily Ever After. I think it’s cool that fans of Titanic-themed stories can have both the bittersweet ending (e.g., James Cameron’s TITANIC) and also ones with happy endings.
And check out this great deal: WRECK OF THE NEBULA DREAM is only 99 cents at Amazon and Barnes and Noble!
I read this story because I was intrigued by the high concept idea. Here are some non-spoiler elements you can expect from this story:
* A re-imagining of a Titanic-style disaster in space, but not a strict one so it feels fresh
* An initial meet and greet with the characters who play key roles in the story
* Hero Nick is a “good guy” type of hero who takes on a leadership role
* Heroine Mara is a business woman (we don't see too many of those in SFR!)
* A subtle, slow-burn romance (in fact, this story edges more towards romantic SF since the disaster is central to the story).
* A sweet heat level
* A good payoff regarding the hero and heroine’s respective roles in overcoming a major obstacle
* A sidekick who reminded me of the Shepherd Book character from FIREFLY
* The POV is entirely from the hero’s perspective.
*Action-adventure quotient: Medium. It’s not a spoiler to share that the action focuses mostly on surviving and escaping, because that’s what this type of story promises. But there are a few space opera type battles as well.
I had the pleasure of interviewing Veronica Scott so we could learn more about WRECK OF THE NEBULA DREAM as well as its creation. Enjoy!
The Galaxy Express: What inspired you to re-imagine the Titanic disaster in space with a Happily Ever After twist?
Veronica Scott: I’ve been fascinated by the sinking of the Titanic since I was a child because my grandfather always said a certain Second Class passenger (who survived) was his distant relative.  I grew up hearing a lot about the disaster and always wondered what I would have done if I’d been there. So many stories on board that ship!
Science fiction and paranormal romances are my favorite genres to read, so naturally when I decided to write a novel loosely inspired by the Titanic, I immediately thought of putting the action on a luxury spaceliner, in the far future among the stars.
As for the Happily Ever After, my hero and heroine do indeed manage to survive but many others aboard the Nebula Dream don’t!
TGE: List six tags that describe the nature/setting/tone of the story.
VS:
* Science fiction adventure
* Science fiction romance
* Titanic in space
* Disaster in space
* Fast moving action
* Narrow escapes
TGE: Without going into spoilers, can you tell us a bit about the world you created?
VS: The Nebula Dream is the newest, most luxurious spaceliner in the Sectors, carrying 8000 passengers and crew on her maiden voyage. Traveling unexpectedly aboard this ship, Special Forces Captain Nick Jameson is ready for ten relaxing days, and hoping to forget his last disastrous mission behind enemy lines. He plans to gamble at the casino, take in the shows, have dinner with Mara Lyrae, the beautiful but reserved businesswoman he’s attracted to….
But right from the beginning, the cruise doesn’t go exactly as planned. The ship seems to have problems, might be jinxed…and then disaster strikes. As Nick thinks to himself at one point:  “Whatever had happened to the Nebula Dream, it was nothing short of amazing (we) weren’t all dead already. Can’t push luck too far.”  So my little band of people soon realize they are stuck on this vessel drifting in space, without enough lifeboats and no rescue ship coming any time soon, racing against the clock and other forces, hoping to escape with their lives…
TGE: Can you describe your research efforts for this story?
VS: I’ve been researching the events surrounding the sinking of the Titanic my whole life basically, read everything about it I could get my hands on because I found the disaster so fascinating. So many intriguing “what ifs” and so many individual tragedies wrapped up in a single event!  There’s a list of some of my primary sources on my webpage. But even now, with the book published, I’m still finding new tidbits of information, which I’m using in blog posts.
TGE: What kind of heat level can readers expect?
VS: There isn’t much time for hot encounters while racing around trying to save yourself and others from a spacewreck. Nick and Mara are attracted to each other from the very first time they meet but they only manage a few stolen moments of romance in the novel. So there’s definite warmth but no heat LOL! Their relationship develops and deepens as they work together against time to solve the problems. 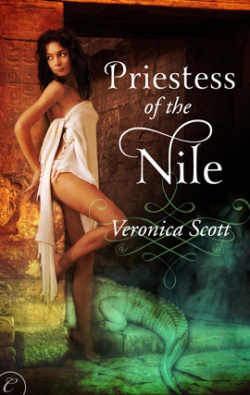 TGE: Regarding the production of this self-published book, what kind of quality assurance can you give potential readers?
VS: I wrote Wreck of the Nebula Dream before I sold my novella Priestess of the Nile to Carina Press last year, and so a lot of my writing energy has been focused on my Egyptian paranormal series and not the SF. But then in January my daughter suggested maybe it would be cool to have Nebula Dream out in time for the 100th anniversary of the Titanic. I'd been interested in dipping my toe into self-publishing and it seemed a shame to miss the anniversary. Publishing the book myself now looked like the perfect timing.
I did work with a professional free lance editor – you can never catch all your own editing problems so it’s a must do to have that other set of eyes. And apparently I have a thing against commas, which the editor remedied.
The eye catching cover was created for me by the incredibly talented Fiona Jayde. I thought she captured the feeling of the story in one picture worth 1000 words, as they say.
TGE: Do you have any advice for authors of sci-fi romance who might be interested in going the self-published route?
VS: I found it to be an exhilarating but somewhat stressful process. My three pieces of advice would be work with an editor; get a professional to create your cover and be sure you are well established in the social media and/or know how to do promotion. 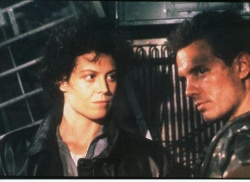 TGE: Please describe a few of your favorite science fiction romance books, films, and/or television shows.
VS: “Aliens” is my all-time favorite SF movie. True, that’s not a romance in any classic sense, but Ripley and Hicks have a few nice moments of dialog. If you’re a romance writer like me, you tend to fill in the blanks and the backstory and the “how you wish it had been”!
I’m a big “Star Trek” fan – loved the remake with Chris Pine! Enjoyed the original “Star Wars” trilogy… fan of ”Battlestar Galactica,”, “Firefly,” “Wall-E”…. pretty much if it’s SF, I’m there.
With books, I’ve always loved SF and if there’s romance involved, so much the better.
TGE: Is there anything else you’d like to share about WRECK OF THE NEBULA DREAM?
VS: I think the story would appeal to anyone who enjoys science fiction adventure with a hint of romance. If you are fascinated by disaster stories, so much the better!
The book is available from Amazon for the kindle and Barnes & Noble for the Nook. Only 99 cents currently… I do plan to have it available as a print on demand paperback in the near future.
TGE: What else readers can look forward to from you?
VS: I’ve written three other SF adventure novels set in this same universe (although not with Nick and Mara). One is out on submission with a publisher at the moment and the other is in revision prior to submission. Or who knows, I just might decide to continue the self publishing trend for my SFR!
I’m currently revising two more of my paranormal Tales of the Nile series, set in Ancient Egypt, so all that plus my day job keeps me busy…
***
Ms. Scott, thanks for your time, and for your art.
Joyfully yours,
Heather
Posted by Heather Massey at 5:00 PM
Newer Post Older Post Home
View mobile version