An Interview With Heather Lin, Author Of THE SYSTEM 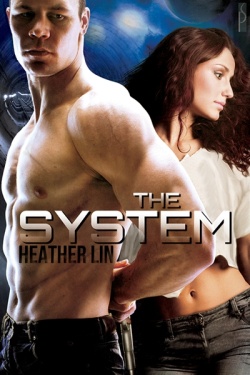 Author Heather Lin has entered the ever-expanding frontier of science fiction romance with THE SYSTEM, a gritty, steamy adventure tale from Silver Publishing. I invited her aboard for an interview to help celebrate the release of her book, which came out earlier this month.

I deeply appreciate that the genre tags for THE SYSTEM in the “Book Details” section include “action/adventure” along with “Romance” and “Science Fiction”! Because yes, women love action-adventure stories as much as the next guy! The lack of segregation is awesome. And it looks like THE SYSTEM embraces the high octane action along with that of the romance kind.

Capri is an alluring young prostitute with a painful past; Brody is a ruthless mercenary for a crew of thieves from the spaceship Gypsy Lass. When he enters her brothel, the attraction between them is instant, electric, and too much for him to handle. After a robbery gone wrong, the crew takes Capri hostage, forcing her and Brody to remain in close quarters until they see fit to drop her on another planet.

But Capri's plight and the intense feelings between her and Brody turn out to be the least of their problems. Together—whether they like it or not—they uncover a secret no one in the whole System could have expected.

And now for my interview with Heather Lin!


The Galaxy Express: Tell us about how you came to be an author. Is THE SYSTEM your first science fiction romance?

THE SYSTEM is also my first science fiction romance, and although it’s just now being published, it’s actually the first (worthwhile) book I ever began writing. I started it six years ago, when I was seventeen and still in high school. Of course, it’s changed and developed immensely since then. I let it sit for a while and finished it during my junior year of college, then I spent a good two years tweaking and editing.

TGE: Where did you get the idea for this story?

HL: I began with the hero, Brody. I love tortured souls: the beast from Beauty & the Beast, Darcy, Rochester, Heathcliff. And I’ve always been fascinated by wayward lifestyles and, of course, science fiction. So I figured what would make a better story than a mercenary and prostitute finding love in a futuristic world? It was originally a novella, focusing solely on their relationship, but I felt the ending left something to be desired and the plot developed from there to include a much meatier, more action-packed story that is twice as long as the original.

TGE: Are there any science fiction/sci-fi romance pop culture homages in THE SYSTEM?

HL: Brody was heavily inspired by Jayne from Firefly.

TGE: What kind of heat level can readers expect from this story?

HL: Silver Publishing gives it a three flame rating, which is “sensual, yet more explicit love scenes, and the language may be more graphic and direct.”

I’ll tell you there’s a good amount of lovemakin’ and the pages are dripping with passion. ;)

TGE: What kind of tech/weapons do the characters get to play with?

HL: Guns! Lots of guns! Most of the weaponry isn’t too different from what we have today, but the crew of Gypsy Lass has a lot of it. There’s also a robot guard dog, which plays a larger part in the sequel (which I’m working on now and hoping gets picked up) that the crew sort of confiscates, along with the spaceship itself and various other bits of technology like readers, which are the equivalent of today’s tablets but have the dimensions of a single small sheet of paper.

The monetary system consists of individual “banks” in wallets and a system of cash cards. Basically, coin and paper money has been ousted completely, and people rely solely on plastic to transfer funds, and the funds are basically numeric amounts individuals are credited with.

But one of my favorite pieces of technology is the “fitting room” in clothing stores—it’s just a console that scans an individual’s body and allows them to see how different items would look on a mini, virtual version of themselves.

TGE: What was the last science fiction romance book/film/television show you enjoyed and why?

HL: Oh, gosh, that’s such a toughie! I’m not sure it counts, exactly, but of course I loved the dynamic between Jean & Logan in X-Men. Not sure that’s a romance, exactly, but, again, I love a tortured hero. I recently caught the last few minutes of Bicentennial Man and bawled like a baby.

But I suppose I have to hop on the bandwagon and say the latest, greatest sci-fi romance I’ve seen is James Cameron’s Avatar. Besides being hella sexy, Sam Worthington’s character is sympathetic (aka, ahem, tortured), noble, and he gives up everything to be with the woman (female?) he loves. I can’t imagine you haven’t seen it, but if you haven’t, I highly recommend it!

TGE: Do you plan to write any other science fiction romances?

HL: Yes! I’m really hoping to turn THE SYSTEM into a trilogy. It stands just fine on its own, but I have so many ideas, and I’m so in love with this futuristic world and these dynamic characters. I’m not ready to let them go! 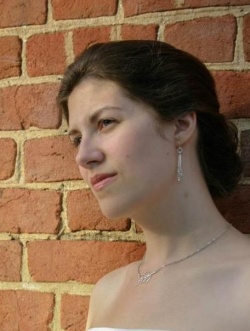 Ms. Lin, thank you for your time, and for your art.

And here is a treat for you, dear passengers—an excerpt of THE SYSTEM for your reading pleasure:

Year 564 after the Migration

Brody walked along a quiet street on the outskirts of New York on Earth one. A car zoomed by every few minutes. The newest ones were held aloft over the street by opposing magnetic charges; others were navigating themselves as the drivers fixed their hair or ate their lunch; and the cheapest ones necessitated the driver to attempt to handle the controls while fixing their hair or eating their lunch. He glanced over to admire a new Ford Mustang before opening the door to a small, neatly-kept building.
On the outside, it looked like a nice, upscale bar, but the inside would have shocked any upper-class drink connoisseur. There was loud yelling and catcalling, beer splashed out of mugs, and scantily-clad girls sat around, waiting for their turn to dance on poles. Brody grinned and rubbed a hand over the stubble of his chin. This was his kind of place.
"Good evening, sir." At the intrusion of the male voice, Brody tore his eyes away from the dancing girls. "Will you be needing service tonight?"
"Yeah, how much?" Brody replied to the short, well-dressed man.
"Depends on who you like. Sit down and have a drink." He smiled accommodatingly. "There isn't any hurry to decide."
Brody gave a short nod before heading to the bar. He watched the girls for a while, took in the scenery. There were older girls who were too faded for his liking and younger girls who were too fake. He was well into his second beer before he saw one that really made him want to open his wallet.
She was coming out of one of the side rooms, tugging a heavy-set, bald-headed man by his hand. They were laughing and chatting, and by the flush of their cheeks, they had just finished something hot and heavy. The girl was a young one, barely old enough to be called a woman, with a slim figure and long chestnut curls that were scattered with braids and beads. She must have felt Brody looking at her and met his gaze for a brief moment. Brody gave her a grin and signaled to the brothel's manager. He came over to the bar with the scheduling window already up on the screen in his hand.
"Have you come to a decision?"
"Yeah. That pretty brunette there." He waved a hand in the girl's direction.
"Capri. She's a very good choice. But I'm sorry to say that was her last customer. Our girls only take five per day. They need their rest. Would you like to choose another one or make an appointment for tomorrow?"
"I think I can handle another one, Guy," said an alluring female voice.
Capri had escorted her last customer to the exit before approaching the bar. The barkeep handed her a glass of water, and she kept her eyes locked on Brody as she took a sip, examining him, sizing him up. He was keenly aware of his unshaven face, ratty jeans, and the gun strapped securely to his hip. But he was unapologetic. He might not be one of her upper-class clients, but he had the money for her. For now, she was his, whether she liked him or not. And by the way she'd jumped to get his pay, he doubted she was fazed by his rough exterior.
"I like the looks of this one," was all she said to Guy by way of explanation before beckoning to Brody and heading back to her room.
"That'll be five hundred," the man told him.
Brody took out his wallet and opened it. A pocket on one side held blank cash cards and the other side held a small scanning device with a numbered keypad. He entered his password and the amount of money and swiped a card. Then he handed it to Guy and followed Capri into seclusion.
She was sitting on the edge of a double bed, her long, smooth legs crossed, waiting for him. Dark curls fell elegantly over the satin fabric of her red dressing gown, and her hazel eyes gleamed green in the overhead lighting. She was the image of perfection, and Brody could feel desire pulsing within him. He sat next to her and fingered the smooth fabric of her outfit.
"Red's my favorite color," he said.
"I'm glad you like it."
Capri smiled and reached up to touch his face. He sucked in a breath at the tender gesture.
"It's been a while for you, hasn't it?" she asked softly.
"Don't get the company of women much in my career."
"What career is that?"
"There ain't one in particular," he replied, trying to focus on what he was saying as her fingers traced the muscles of his chest and abdomen. "The crew I run with just does… sorta odd jobs."
"Sounds exciting," Capri murmured, raising her eyes to meet his. "So how about you tell me your name before we get started?"
"Shots," he answered.
"Is that your real name?"
"That's what the boys call me."
"Well, as you can see, I'm not one of the boys." She gestured to her modest, but all-too-appealing curves.
"Brody," he answered after a moment.
"Brody," she repeated softly, grasping the bottom of his shirt and sliding it up over his head.