Reflections on THE TWILIGHT ZONE Episode “The Lonely”


Thanks to the convenience of Amazon Prime, I was able to watch an episode of THE TWILIGHT ZONE that appealed to my science fiction romance sensibility. “The Lonely” is a story about a convict imprisoned on a distant planet who receives a gift in the form of an android who looks and acts like a real woman (wow, did they have great special effects back in 1959, or what?!). 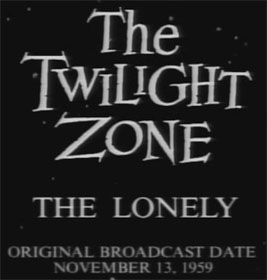 I don’t remember seeing this episode but I’ve probably heard about it now and again over the years. The most recent and clear recollection I have is a comment in response to author and blogger Heidi Ruby Miller’s post about clockpunk at Inveterate Media Junkies. In fact, the commenter noted a similarity to one of my books:

The Watchmakers Lady sounds like it has some parallels with the Twilight Zone episode “The Lonely” as it deals with a desperate man falling in love with a robot who is his only source of companionship.


Therefore, I had that episode in mind when I needed a quick TV break recently. I must say, “The Lonely” provided some pretty awesome entertainment. 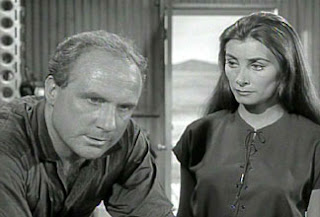 The story of Corry and Alicia isn’t science fiction romance in terms of romance conventions since there’s no Happily Ever After. Still, the story poses remarkable “What if…?” questions about romance. What qualities define a person? Is a romance between a person and an android valid? Are androids capable of love? Do artificial life forms deserve equality in love? Who has the authority to decide with whom a being can fall in love?

Corry undergoes an amazing transformation since at first he totally mistrusts Alicia. He pushes her away out of fear. Yet despite their differences she wins his heart. Corry develops the ability to look past her mechanical parts and eventually sees her as a person equal to him in all things. There’s also, I thought, a clear implication that Corry and Alicia are sexually active. Talk about an envelope pusher!

Unfortunately, the couple lives in a society that can’t accept such a union, with tragic results.

“The Lonely” is strongly worth an SFR fan’s time (assuming you haven’t already seen it) because the story addresses many themes relevant to the subgenre. Culturally, it’s fascinating to witness how times have changed. When the episode originally aired, audiences probably weren’t ready for a romance between a man and an android, one decidedly celebratory in nature. I can’t help but wonder if the story’s ending is tragic not only because of the emotional punch it provides, but also because audiences of the time wouldn’t have been able or willing to accept a happy ending for the couple. In that sense, “The Lonely” is clever and deeply insightful.

I also think some of the general themes of “The Lonely” made its way into science fiction romance, whether intentionally or not.

For instance, check out the blurbs for the following stories:

Zoe is all alone on an outpost monitoring a lonely quadrant of space. It's nearly Christmas, and all she has for company is her computer AI, Rupert. She isn't expecting a present from Xion Corporation to help pass the time, but when she opens up the box to find a sex bot, a whole world of steamy entertainment possibilities come to mind.

When Zoe activates Sam, she doesn't realize the trouble she's in for. Sam takes Zoe to sexy new heights, and Rupert does a stellar impersonation of a jealous boyfriend. Zoe herself struggles to keep the situation real despite her growing lust, but it's becoming more and more obvious that she's falling in love. But with who-Sam or Rupert?

When a computer virus is unleashed on the outpost, Zoe must choose-or risk losing them both. 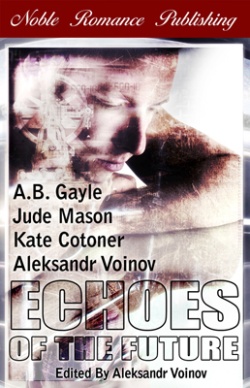 Sebastian is bored. He has another five years of lone duty supervising his family's robots on their space station. The last thing he wants to do is the housework. For Christmas, his mother sends him a Domestic Darling cyborg. True to form, she purchases a factory second and sends one that doesn't quite fit the bill. Instead of being a pert blond with big tits and a cute ass like in the advertisement, this one is six foot tall and built like a Greek god, a very virile Greek God. In an attempt to improve its functioning, Sebastian uses some of his brilliant programming skills. The resulting changes ensure Sebastian will never be bored again.

It’s almost as though authors who write these types of stories are helping to finish what “The Lonely” started way back in 1959. Color me awed.

Does anyone know if there are other science fiction romances with a similar premise? I sure would like to know about them.