Universal Studios has released the official trailer for OBLIVION, a post-apocalyptic science fiction film coming to U.S. theaters in April 2013. 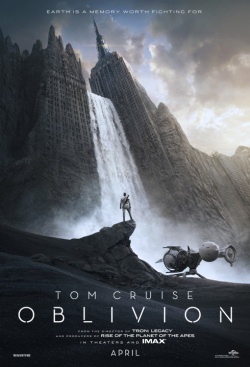 
Jack Harper (Cruise) is one of the last few drone repairmen stationed on Earth. Part of a massive operation to extract vital resources after decades of war with a terrifying threat known as the Scavs, Jack’s mission is nearly complete.

Living in and patrolling the breathtaking skies from thousands of feet above, his soaring existence is brought crashing down when he rescues a beautiful stranger from a downed spacecraft. Her arrival triggers a chain of events that forces him to question everything he knows and puts the fate of humanity in his hands.

Now for the trailer:

According to the film’s Wikipedia page, “Kosinski wanted to film a cinematic adaptation of the graphic novel Oblivion which he wrote with Arvid Nelson.” (Nice job if you can get it.)

I can’t tell if the graphic novel was ever released (or maybe it had been released and then taken out of circulation because of the film?). At any rate, the official blurb and trailer don’t quite mesh with the book upon which the film is based. Here’s a description of the original story from Amazon:

In a future where the Earth’s surface has been irradiated beyond recognition, the remnants of humanity live above the clouds, safe from the brutal alien Scavengers that stalk the ruins. But when surface drone repairman Jak discovers a mysterious woman in a crash-landed pod, it sets off an unstoppable chain of events that will force him to question everything he knows.

Makes the trailer a bit clearer, doesn't it? Also, the sci-fi romance angle seems more pronounced in the book blurb. Looks like any potential romance will intersect the film at the point when “Jak discovers a mysterious woman…”

If OBLIVION has any romance elements they probably equate to romantic SF. It’s impossible to predict how the apparent romance subplot will end. Naturally, given Tom Cruise’s involvement and the way the poster is designed, this is being advertised as an action flick with a lone hero and any romantic elements are being vastly underplayed. Maybe that’s accurate, maybe it isn’t. It’ll be interesting to discover which is the case.

If I uncover any more relevant information I’ll be sure to let you know. In the meantime, what are your thoughts about this film in general?