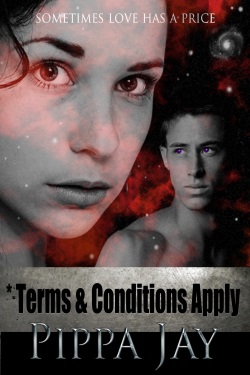 TERMS & CONDITIONS APPLY is a highly atypical title for romance (if not SF), but it grabbed me from the start. By way of explanation, I have an admittedly eccentric interest in mundane phrases being re-invented as story titles (For example, “Yellow #5,” a synthetic food dye, is a phrase I’d love to see used for a book or film.).

For the phrase “terms & conditions apply” to be paired with a sci-fi romance promised something unusual. That’s what really drove my interest—I wanted to know the mystery behind the phrase and how it related to the story.

Next, I learned about the blurb:

It was meant to be a romantic getaway for Marie and the love of her life Jaisen; a chance for him to get to know her better after months of her denying him more than a few stolen kisses. Instead, Marie finds herself dumped and alone on Venus Ascendant with no credit for a transmat and the next starship home not due for another hour.

But the all-seeing AI isn’t going to leave anyone aboard the space station with their dreams unfulfilled. Marie's boyfriend might not have made it to the station, but there are others willing and able to take on the role - even if they aren’t entirely human.

The marketing-within-marketing angle hooked me further. I also liked the mystery surrounding Marie’s potential new paramour. Beyond those elements, I didn’t need anything else to convince me—I bought the story.

Once I read it, I knew I had to invite TGE contributor Diane Dooley aboard for one of our book chats. TERMS & CONDITIONS APPLY went in some unusual directions and raised certain questions worth discussing.

Warning: This post is not a review but contains Major Spoilers. If you intend to read this story, I recommend you avoid this post until you’ve done so.

So, Diane, let me hit you up with the first element that jumped out at me from TERMS & CONDITIONS APPLY. I felt the story had a surprising amount of religious subtext, much of it Christian. Here are some examples:

Marie is a virgin. When the story opens, she thinks, “So much for their first romantic getaway together. After all those months of badgering her, all those times she’d held back, not willing to give up her virginity without some kind of promise of a future together…” (Kindle location 75 of 721)

Early in the story, Marie encounters a statue: “…pseudo-bronze statue of a naked woman, her modesty protected only by a veil of wavy hair…” (60)

The hero, Soren, is a “devoted disciple” of Ganesa, the AI in charge of Venus Ascendant

“Why did she keep treating him [Soren] like a prostitute instead of the man she believed she could see?” (242) [Hmm, shades of Mary Magdalene?]

Of her quarters aboard the station, Marie says, “This is heaven. I’ve died and gone to heaven.” (276)

To clarify, I was raised Roman Catholic, so I may be giving the above references more weight than other readers. That said, I was curious about the themes of faith and celibacy before marriage/lifelong commitment. I wonder, is the religious subtext intentional? The reason I ask is that if I encounter a virgin heroine in a futuristic setting, I start looking for plausible reasons (outside of a repressive society).

Regardless of authorial intent, in light of the ending one could surmise the story explores the intersection of love and spiritual beliefs and how sometimes that intersection leads to internal conflict for some people (e.g., should one marry for love or procreation? Should sexual history be a factor when considering a potential partner?). TERMS & CONDITIONS APPLY might be interpreted as a way of questioning the status quo of Christian type religious beliefs as they relate to love, sex, and marriage.

What about the gender bias inherent in the idea that a woman should remain a virgin until marriage? Was Jaisen also a virgin in this world? I don’t recall the story revealing that—to my mind—very important information. It would have been an interesting angle to explore.

Diane, any thoughts on the religious subtext or did you have a different experience?

Diane: On my first read I didn’t notice the religious subtext until I got to the end. The highly unusual ending, in which Marie is fatally injured and is offered the opportunity to live on in a different form, made me think of an amalgamation of resurrection and reincarnation.

When I read it for the second time I paid more attention to possible religious subtext and the examples you mentioned above did jump out at me. I think the author intended to portray a future world in which religion is still an important part of many people’s lives. It didn’t feel in the least bit preachy to me, more a nice little layer that adds richness to the world building.
Why was Marie still a virgin? I will say that she came across as very young and somewhat immature, giving the story a ‘new adult’ feel to me. She seemed to have given her heart to someone unworthy of it, then was able to transfer her affections to Soren with relative ease. She struck me as someone who wanted to be in love, who wanted to experience love-making.

Of interest to me, also, were the references to class. Marie refers to herself as ‘worker grade’ a couple of times, as opposed to Jaisen, who seemed to be of a wealthier class. Certainly he seemed able to afford what must have been a very expensive trip to Venus Ascendant, and then abruptly cancel his plans after wooing Marie for some time.

Marie seems to have been holding out for some kind of commitment from him before giving up the goodies, but then gets cruelly dumped, while suspecting that Jaisen is getting what he wants from a woman of his own class.

Again, I liked these little world building details, though I would have liked for them to be fleshed out a little more. Being that they’re from different classes, how did Marie and Jaisen meet? Did their budding relationship take place in Jaisen’s world or Marie’s? Did Jaisen think Marie would be ‘easy’ because she is less wealthy than him? I would have liked to have known more.

Heather: Oh, good point about the resurrection/reincarnation. Yes, that framework fits vis a vis the other subtext. I agree, it wasn’t preachy. This story seemed to blend ideas from Western and Eastern religions and explore elements of both.

Let’s talk about the “highly unusual ending,” as you described it.

In her post A Hard Truth, Pippa Jay stated that


“Terms & Conditions Apply, for example has a...how shall I put it?...non-traditional HEA for a romance - or for any kind of genre really. My editor noted that fact to me in the final rounds.”

After finishing the story, I was scratching my head over the perception that the HEA is non-traditional. IMHO it falls squarely within SFR genre conventions and was consistent with other story elements.

Because of an avatar’s function as an employee of Venus Ascendant, I can understand why some readers might interpret the HEA differently than I do. And if a monogamy-themed HEA is important to you, then the ending of this story might not be up your alley.

On the other hand, the ending leaves things open to interpretation. How one reacts to the ending will depend on what one expects from a story: Are you seeking validation of your worldview or are you comfortable being asked to question your assumptions about your worldview?

TERMS & CONDITIONS APPLY is an example of where science fiction romance distinguishes itself from non-speculative romance subgenres. SFR actively invites readers to explore other worldviews, other perspectives, and other cultures. Not only to explore, but also to accept that the HEA/HFN is the best one for the characters.

Also, in this story technology plays an important role because it led to a culture of avatars, a type of society with its own unique traditions and belief system. There’s a strong theme about the idea of acceptance in this story, particularly as it relates to artificial intelligence.

Do you have any thoughts about the ending--or any other elements? 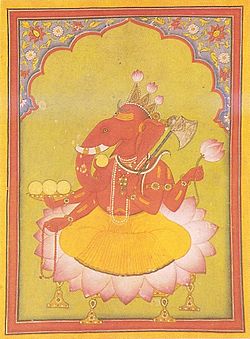 Diane: I was in mixed minds about the ending. On one hand I loved that, up until the very end, I was completely in the dark as to how these two would achieve their HEA. As a romance reader, I love it when an author manages to keep the stakes high until the very end. But, on the other hand, I also felt that being an avatar serving Ganesha aboard Venus Ascendant was very close to being a slave; the purpose of the avatar being to serve the guests in any way necessary, while being unable to leave.

Maybe my imagination is being a little harsh, but Marie in particular was very sexually inexperienced and when she made the decision to stay aboard as an avatar so that she could be with Soren I found myself thinking that she was making a rash and immature decision, especially since she had the option of NOT remaining on Venus Ascendant.

I’m not a reader who requires a ‘happy ever after’ wrapped up in a big red bow, complete with adorable baby epilogue, so I was fine with my wondering what would happen next in the story. As I so often do when an ending fails to fully satisfy my curiosity, I added my own little internal epilogue, in which Soren and Marie lead an uprising of avatars, banish Ganesha, and turn Venus Ascendant into a paradise for their kind. *grin*

Final thoughts: a well-written and thought-provoking short novella which, though it failed to satisfy me completely, did hold my attention and curiosity throughout the story, and remained in my thoughts even after I’d read it twice.

Heather: I can see how that interpretation could make for an unsatisfying/ambiguous HEA for some readers. What if Marie had been able to consider the offer while not under duress? Would the avatar lifestyle have been a first choice rather than a last/only resort?

Also, there are ethical implications I wish the story had explored—if criminals can be made into avatars, how does Ganesha address issues of mental health? Does she screen the candidates in any way? I shudder to think about what an avatar with undiagnosed antisocial personality disorder might do with the kind of power Soren had.

Marie expresses relief that Soren hadn't been a criminal in his former life, which made me go "Hmmm" and wish for a story where the avatar love interest *had* been a criminal.

While I wish TERMS & CONDITIONS APPLY had had more story development in a few areas, it raises plenty of issues worth analyzing. I’m glad I read it.
Posted by Heather Massey at 5:00 PM
Newer Post Older Post Home
View mobile version