It took me long enough, but I finally read Clare Dargin's COLD WARRIORS. A shout out goes to author Rae Lori who helped keep this book on my radar! One of the main reasons I was interested in the title was because of the multicultural nature of the romance--the heroine is a person of color. The version I read is a 2013 re-release from Decadent Publishing. Here's the blurb: 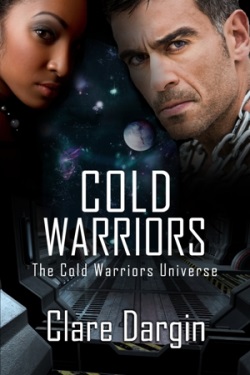 Left in cryogenic stasis for nearly a century, Caitlin Driskoll is awakened and drafted into a war she knows nothing about. Expected to defend a world where her kind is despised and expendable, she discovers love and respect from the one man who can’t be associated with her.

Lieutenant Colonel Medoro Keegan has spent a lifetime in the Marines. With no family to speak of, the Corps and his ship, the USS Blanchard, are all the loved ones he needs…until Caitlin sparks a fire within, that threatens to consume him if he doesn’t walk away.

Will he choose a life of certainty in the only world he knows or give it all to Caitlin and run the risk of losing someone, yet again?

***
I was thrilled to read another racially diverse sci-fi romance (see my roundup of other titles here). When the story takes place, Caitlin's race isn't an issue. Frankly, what's of more significance is her representation on the cover. Yay!

The story does deal with prejudice, but of a different kind. Because of cryogenic technology, Caitlin experiences discrimination twice over during the course of her lifetime. COLD WARRIORS, in part, explores the idea that the more things change, the more things stay the same.

Here are some other non-spoiler tags for you:

* Military SF setting. The story has a "quiet" tone, meaning it's more politically focused than action-adventure

* The war is more of a backdrop element

* The gruff hero has deep-seated fears about his feelings for Caitlin, mainly because of concern about how it could threaten his job. This aspect makes him a rather prickly character, especially at first. It's a type of realism that kept me guessing about what he'd ultimately decide to do.

* Long-suffering, yet strong heroine--she's really put through the wringer

* The story explores themes of prejudice, exploitation, and marginalization of people like Caitlin, the "Cryos." Lots of meaty social commentary in this story.

You might also be interested to know that Clare Dargin has a forthcoming release set in the same universe. ICE AND PEACE (Decadent Publishing), a sequel, is slated for a 2014 release. The author describes it as "Science Fiction With a Romantic Twist." Here's the cover and blurb: 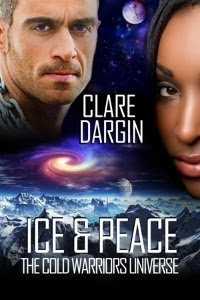 A New Threat? After a long and vicious war, peace is on the horizon for Earth and its allies.  However, a series of mysterious attacks on several secret military installations, causes hostilities to rise once again.

Redemption.  Having left under a cloud of disgrace, retired Marine Colonel Medoro Keegan is called back to duty.

Bound.  His wife Caitlin, the only surviving member of her team, chooses to embrace her life, albeit grudgingly, as a cryo soldier.  Seen as sub-human, she is forced to serve a planet that denies her rights as a person.

Driven.  Guided by their sense of duty and belief that somethings are bigger than them, they are determined to risk it all.

Hope.  The cost of war is high.  Can their love and marriage survive?  Or will it be killed off by the very same mission that brought them there?