Cover Love For D.J. Davis' WHILE YOU WERE AWAY

Debut science fiction romance author D.J. Davis recently shared the cover of his forthcoming Red Sage release WHILE YOU WERE AWAY in a comment section at TGE, but I didn't want it to get buried. Especially since there's a big honking futuristic gun on the cover. Pretty awesome looking weapon!

Therefore, I did a little digging and found the blurb as well. The author shared with me that the ebook (a novella) will tentatively release in August 2014. Sure, that's a year away, but every day is a good day to anticipate an upcoming sci-fi romance! 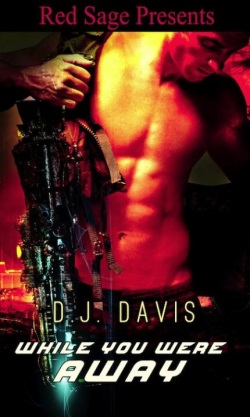 Kev Thorsin has returned from a twenty-year war campaign across the stars, battle-weary and ready to settle down with the woman he was forced to leave behind so long ago for a war that they should never have been a part of. But, amidst treachery that left his transport ship a floating hulk, he learns that his own world has been overthrown by a corrupt regime ruling with an iron fist. Angered and confused, his only thought is to return and help the only woman that’s been on his mind since the day he left and try to get answers.

His fiancé, Rianna Elain, is in the thick of it back home with a group of freedom fighters known as Libertas headed by the charismatic Terrill Briggs, a flirtatious yet honorable man who wants to see the people free once more and will go to great lengths to see it through. They are on the run from Tetraparagon Conglomerate’s security forces and a noose that closes tighter each day, which may soon find them behind bars, or worse.

Yet Kev knows of a place where they can live in safety, a place far off the grid, if they can just evade Tetraparagon forces and get off the rock—a task easier said than done.

The three hatch a plan to take to the stars, bringing the remaining members of Libertas and their families, but will they succeed in starting a new life beyond Tetraparagon rule or will they live out their remaining days in hiding from a hand that stretches into the very black of space?