The Dark & The Gritty: Part II


Previously, I blogged about Ann Somerville's COLD FRONT, one of two dark and gritty sci-fi romance titles I made it a goal to read. The second title I had the pleasure of experiencing was Darren Bloomquist and Angelia Sparrow's HARD REBOOT.

When I first learned about HARD REBOOT, I was intrigued, but also a little fearful. The description and publisher tags told me I'd be entering new sci-fi romance territory: 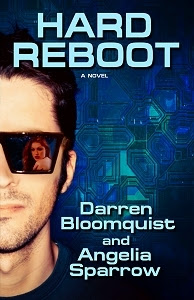 Two years ago, Sean O'Neill's wife, Caitlin—the ace net-runner called Irishgirl—was stolen from their bed. Now, he knows where she is, but getting her back is only the first step in a long journey.

Caitlin has been trained as a sex slave, her former skills as a net-runner and cyber-thief totally stripped from her, along with her identity and most independent thought. Powerful and wealthy social elites, playing their own dangerous high-stakes games, have hired Sean to retrieve her and again make her what she once was.

But two years is a long time to be out of the net and out of normal society. A lot of new programming has been laid down. Now, giving Irishgirl a hard reboot may take everything Sean has in him, and more...

My main concern was how the "sex slave" angle was going to play out. Usually this trope is eroticized and fetishized in sci-fi romance. On the other hand, the premise and graphic content promised to be unlike anything I'd ever encountered in SFR. So I took the plunge.


Now I'd like to share a bit about my experience reading HARD REBOOT. I'll include some non-spoiler tags, but consider these reflections as more stream-of-consciousness impressions.


HARD REBOOT features a cyberpunk, dystopian setting wherein corporate antagonists have so much power they can and do micromanage the lives of downtrodden citizens like Caitlin and Sean. In that sense, for me at least, the story has strong shades of George Orwell's 1984. I think it helps to approach the story with that kind of--fantastical?--mindset, especially since the powers that be in HARD REBOOT possess the ability to perpetrate a disturbing amount of brainwashing.

The tragic romance featured in HARD REBOOT is closer to reunited lovers than anything else. Caitlin and Sean were married before the story began. The romance plot is about the extreme obstacles they face as they try to rebuild their relationship from the ground up. And when I say "ground" I mean a place of absolute hell. It's kind of like "survival romance" because they must first survive their hostile world if their romance is going to flourish again.

The blurb describes the concept of Sean "giving Irishgirl a hard reboot" and therein lies the dark, gritty, shocking, and disturbing nature of this story. HARD REBOOT poses the question of "How far would you go for love?" In other words, would you sell your soul?

HARD REBOOT is chock full of cyberpunk elements and virtual worlds. It's practically a love letter to online role-playing games! The level of detail demands that one gives the story a close read. It's political, suspenseful in places, and features an ensemble cast. That said, this is also a character-driven story.

The speculative "What if…?" nature of HARD REBOOT is effective because the story got me thinking beyond its fictional world. It made me wonder if some of the elements in the story have counterparts in real life. Specifically, issues having to do with corporate corruption, both in terms of the business side as well as the personal lives of corporate moguls of the highest, wealthiest levels.

I'm scared to ask the question of whether sex slaves similar to those in HARD REBOOT have real-life counterparts. Even if nothing in the story is based on real-life occurrences, it still prompted me to reflect on a variety of issues. For example, what might happen if corporations gained more power than governments, particularly in a time of incredibly advanced computer technology? Maybe it'd be advantageous, or maybe it would introduce unprecedented levels of oppression.

I'm not sure I've properly conveyed what it's like to read this story. It's not a book that will give you warm and fuzzies, but it definitely has a strong theme of "love against the odds" and a sense of hope. It's a disturbing story, but one told with care. Yes, there are regular scenes of bondage, but the reader is also invited to reflect on the underlying themes and engage with the text on an intellectual level.

Frankly, only a certain type of SFR fan need apply to HARD REBOOT. One line from Vivian Archer's Goodreads review sums up the target audience perfectly:

Mr. Bloomquist and Ms. Sparrow, thanks for your art.