Is DIMENSIONS: A LINE, A LOOP, A TANGLE OF THREADS a Film for Sci-Fi Romance Fans? 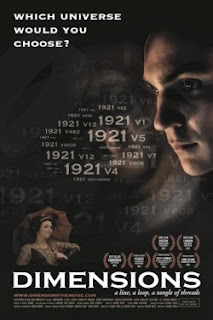 DIMENSIONS: A LINE, A LOOP, A TANGLE OF THREADS is a British film that debuted in the U.S. on VoD on October 18. It was written, directed, and produced by the team of Sloane U'Ren and Antony Neely.

In my October roundup, I wondered how this film would play out. Is it strictly an SF time travel story or would it actually be a sci-fi romance?

Courtesy of the filmmakers, I had the opportunity to watch the film in advance of its release. So I can now answer that question (subjectively, of course!). I can't tag it as a bona fide science fiction romance, however I think it has strong appeal for SFR fans. It's a film that includes some of the elements found in SFR even though it doesn't strictly follow genre conventions. "Romantic SF" might apply--depends on how you define it.

I'll discuss it in very general terms in order to avoid spoilers.

DIMENSIONS is a cerebral, yet character-driven film. The time travel elements are definitely science based. The film doesn't focus on a developing romance between two adults per se, but it certainly celebrates how much of an impact love and friendship can have on our lives and life decisions. The story also explores the idea of exerting control upon Fate/destiny as well as the choices and sacrifices one might have to make in order to do so.

The story is open ended in that it invites the reader to decide what happens to the characters--particularly Stephen and Victoria--after the credits roll. DIMENSIONS is angst-filled (but not necessarily emotionally wrenching) and bittersweet, yet also hopeful.

There's no sex, gore, horror elements, or anything like that. There's some mild violence, mature themes, plus a scene involving a child in jeopardy.

Production-wise, it looks polished and the featured time travel technology is charming and inventive. The cinematography is lovely. I'd recommend DIMENSIONS for adults who prefer quiet science fiction films that engage them on an intellectual level. Upon further reflection, DIMENSIONS might make a good gateway film for adults interested in trying out a time travel SF film for the first time (in other words, the science fictional elements are very accessible).

DIMENSION: A LINE, A LOOP, A TANGLE OF THREADS will be available on iTunes and DVD later this year. In the meantime, you can rent/download or buy it. For more information, visit the official site, the film's IMDB page, and follow dimensionsmovie on Twitter.