People say that having things in common makes a good relationship.  But when two people are the same, they encourage each other to stay the same. It’s the differences that make you grow, and that make you a more interesting person.  And what is more different than being from different planets….

The omnipresent rule of the Colonies span scores of star systems, all of them different.  Some of them thrive, but others on the edges of the space have, where life is tougher, have different ideas.

RECKLESS RESCUE is a lost colony story. I hadn't read one in a while so when the book was offered for free on Amazon I snatched up a copy. I love trying new-to-me authors because I enjoy the "What am I going to discover next?" feeling. And the oh-so-affordable price point made it mighty easy to take a chance! Before I start tagging this story, here's the RECKLESS RESCUE blurb:

Stranded on the dying planet of Zerris, Marlee longs for the one thing she can’t have…a family. Due to the noxious gas covering the planet, she can’t conceive a child, and the Council, determined to repopulate the planet, have ended her third—and most precious—relationship. They insist she pick a new mate and try again, but she’s sworn off love and the possibility of ever having a real family.

When a ship from the thriving planet of Urslat crashes on Zerris, Marlee rescues the ship’s daring captain, Tyris. His ship is grounded, winter is setting in, and he won’t survive without help. She offers him a deal…he can live with her if he pretends to be her mate so the Council will leave her alone.

Tyris agrees and a hungry desire sparks between them as they battle the harsh winter and primitive conditions. Their attraction grows, and soon, keeping their distance becomes impossible, even more challenging than the snow, the Council, and, for Marlee, the risks of a real relationship.

Will she risk her heart one last time for a chance at her dream? Or will Tyris be her undoing?

All well and good, right? However, what I didn't expect was that I would reach a point--twice--where I nearly stopped reading. Oh noes, I thought. What could be happening here?

Neither the straightforward prose nor formatting was an issue. The book is decently packaged IMHO. I don't recall any grammar or typo drama.

Rather, because of the opening scenes, I began harboring a concern that the story wasn't going to fall into SFR territory. For one thing, the hero, Tyris, is married. I don't usually encounter married heroes at the beginning of a story, so I wasn't sure what to think. It kind of threw me for a loop. I thought I might have misread the blurb or approached the story with the wrong expectations.

But since I had barely started, I decided to keep reading. Plus, his marriage is on the rocks so maybe he'd get divorced right quick. I really hoped he would, because the only side we see of the hero at this point is an angry, bitter one.

The second plot point that posed an issue--and this isn't a major spoiler--was how Tyris discovers Zerris. (The blurb reveals that he travels to Zerris, but not the lost colony aspect.)

I was shocked by how fast Tyris found the lost colony. Given that its discovery posed an immense challenge, even for the military, I questioned how he could locate it when so many others had failed. This part of the story may be problematic for readers who expect a little more scientific rigor in their SFR.

Yet there will also be readers for whom that very same plot point will represent no issue whatsoever, especially since it enables the hero to reach the heroine fairly quickly (in terms of story pacing). It's kind of like a time travel romance that isn't too concerned about the mechanics of the time travel device/portal.

Once Tyris reached the lost colony, I was glad I had kept reading. The colony is in really dire straits. Its setting is described with a lot of detail and provided a strong sense of daily life there. The setting invites us to contemplate how we'd function, adapt, and evolve in the absence of technology that we currently take for granted. We see much of colony life through Marlee's POV and she's a likeable heroine.

This isn't a story of high drama so much as simmering tension. The stakes--specifically those related to the colony's survival--are quite high. I couldn't predict how the characters were going to resolve the situation, which increased my anticipation and prompted me to keep turning the virtual pages. RECKLESS RESCUE delivers a good amount of external plot along with the romance, which led to me doing a little happy dance.

I was of two minds about the ending, though. 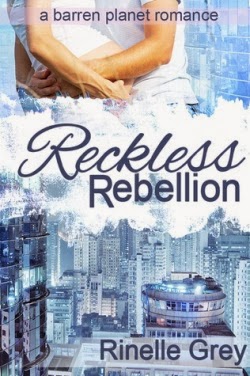 Like Tyris discovering the lost colony, I thought he and Marlee resolved the external conflict too easily. Even so, I don't question the direction the story ultimately took. It offers a tidy HEA that no doubt many readers will enjoy, but part of me was hoping for an HEA with a thorn in its side. In other words, an HEA where the couple remained together but still faced the external threat that had been set up so convincingly earlier in the story.

I fully expect other readers to view the ending differently, particularly regarding the point that Marlee deserves a better life. As it stands, the story ends on a fairy tale-like note. That aspect certainly has appeal.

Still, I'm going to argue that the colony's main problem was so dire that the story could easily have supported an ending that was more dystopian in nature. RECKLESS RESCUE has a bleak aspect to it and I wouldn't have minded if the romance had subverted conventions in order to maintain some of that bleakness.

What can I say? :) I'm the type of reader who likes the fairy tale endings *and* the endings that offer a twist on genre conventions! Having a choice of both is like icing on the cake.

To recap, here are my tags for RECKLESS RESCUE:

Tyris and Marlee's story continues in RECKLESS REBELLION (scroll down for blurb). For me, RECKLESS RESCUE stands alone well enough, but there's definitely a significant, unresolved romance plot point. Book three, which is slated for 2014, is a spinoff story that I'm guessing will feature Tyris' brother. 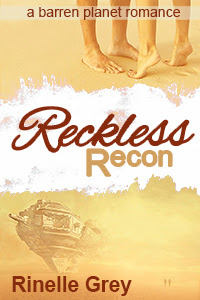 Question for my passengers: What are your thoughts about SFRs with dystopian or bleak settings and how they impact the romance? What kind of HEA do you expect/want in such stories?