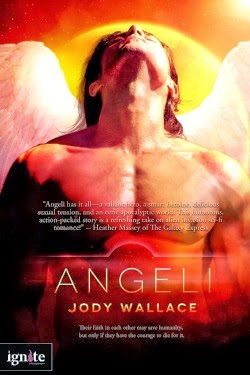 There are a variety of ways authors can come at sci-fi romance. I'm always interested in discovering the ways they choose. On its surface, Jody Wallace's ANGELI—out now from Entangled Publishing!—approaches SFR by way of a paranormal romance veneer. But the story handles the "paranormal" elements in a very sly manner. In fact, after you read the story even the blurb takes on a new meaning. Speaking of blurb:

Gregori’s last mission is to protect Earth from the demons threatening to take control. He doesn’t care if he survives as long as he averts the impending apocalypse—until he meets Adelita, a human refugee, whose spirit and determination give him a renewed reason to fight. And live. He’s falling for her, despite the fact he’s told her nothing but lies and there can’t possibly be a future for them.

Adelita can hardly believe the archangel Gregori, sent to defend mankind, has lost his faith and his edge. After he rescues her from a demon attack, she vows to help him recover both by any means necessary. But can she keep her own faith when she learns the truth about who and what Gregori really is?


And is that an Alex Ross inspired cover, or what?! The style is a neat twist.


ANGELI is the first in the author's new Maelstrom Chronicles. It's a post-apocalyptic, alien invasion science fiction romance with a light comedic touch. It'd make a great cross-over story for paranormal romance readers who want to give SFR a try for the first time.

ANGELI is a fun story (I read an advanced copy, and as you'll note on the cover, that's my blurb!), and I particularly enjoyed the social commentary zingers sprinkled throughout. Nobody does 'em like Jody Wallace, so I invited the author aboard for a chat about her new series!


Heather: For over a decade, you've been involved in science fiction romance in a variety of ways. You helped run the Science Fiction Romance Newsletter. You're active in the online community. You have extensive knowledge about the genre. And in January, your sci-fi romance ANGELI will release from Entangled Publishing. Therefore, I feel you're in a uniquely expert position to answer the following question: Why do you love cats so much?
Jody: Cats are already our somewhat benign alien overlords. I simply bow to my humble fate with a willing heart and petting/scritching/can opening hand, so as to reduce the stress and angst that would result otherwise.

Heather: Scritching, yes. I can see how that skill would come in handy. And speaking of benign alien overlords, let's talk about ANGELI. What's the least we need to know about the story?

Jody: The least? There are no cats in it.

Heather: Interesting! Good stuff to know for folks who are allergic to cats or the idea of cats—they can definitely check out this story. Right now I'm packing a bag to visit the world of ANGELI. What items should I include to navigate the post-apocalyptic setting?

Jody: You’ll need guns to shoot crazed looters and coyotes, a rugged vehicle with lots of oomph to navigate the treacherous terrain, and—okay, just fly around in a helicopter. Unless you see a daemon flying toward you—which looks like a big, red man-bat—in which case, you’re toast.

Granted, it’s only the western half of the US that’s a post-apocalyptic wasteland, so in the rest of the world, you have your standard frightened masses, martial law, fighting, riots, food shortages... Well, I think I’d take my chances in the wasteland. Even with daemons flying around and deadly hordes of shades oozing across the landscape like rivers of tar, I’d still be more worried about the people.

Heather: Pack my toaster, check. And if it's damaged by red man-bats or crazed looters, can I hire the heroine, Adelita Martinez, as my lawyer? Did you mention she's Latina yet? Because you should definitely discuss it. That ANGELI has a Latina heroine.

Jody: Technically Adelita is in law school, since she’s only 26, but once she graduates, I suspect she’ll be a very effective lawyer. After all, she convinces disillusioned career soldier Gregori, entrusted with the job of guiding and saving an entire planet without letting any of the natives know he’s not actually an angel, to let her participate in Operation Save Terra. Well, Adelita figures she’s in charge of it, whether Gregori realizes it or not.

And yes, she’s Latina. That is one facet of her character. She’s also talkative, Catholic, the devil (according to one of her ex-boyfriends), not terribly fond of books by dead white men, persistent, inventive, and a very good shot.

Though race is mentioned in the book, I wouldn’t say it’s presented as an issue. Gregori is from a more evolved society than most of the current cultures on Earth in that respect, and Adelita is able to adjust to that.

Heather: I like the idea of a character's race being normalized in a sci-fi romance, so thank you for making that kind of creative decision. It's important to include People of Color even if the story's focus isn't race related.

Jody: I agree. Even though Angeli doesn't focus on race issues, I felt it would be more interesting for readers, and certainly for me as a writer, to feature some diversity in the story. 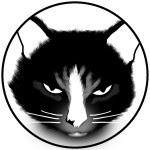 Heather: Speaking of diversity, who wears the paws in your family? (Yes, we're back to the subject of cats, apparently.)

Jody: I do. Which makes typing very hard, so I keep my paws in a secret pocket beside the recliner where nobody else can find them, especially not Meankitty.

Heather: LOL! Speaking of typing, type away about this: Do you think the science fiction romance genre and/or its fandom has evolved in any unique way over the past decade or so?

Jody: There’s clearly a lot more SFR than there used to be. Even when Johanna Lindsey and others were publishing futuristics back in the 1990s and when Susan Grant’s CONTACT (great book) won a RITA in 2003, SFR has always had a smaller readership than contemporaries, historicals or even paranormals. For whatever reason (reasons I know you’ve discussed many times on The Galaxy Express!), when hypothetical science is a “woo-woo” element in a story, readership decreases. Not so much with movies—so many popular blockbusters have superhero and SF elements, it’s no longer surprising. Not that those movies win all the industry awards, but they win the money and the eyeballs, and that counts, too.

But with literature? Yeah. SF elements seem to be an audience shrinker. In the SF/F genre, I’ve heard it said fantasy has a larger readership than SF, for example, so it’s not just romance where SF elements aren’t as much of a draw. A seeming exception might be dystopians. That particular SF subgenre been huge in young adult since THE HUNGER GAMES and is possibly going to creep more into romance. ANGELI is, in a sense, a dystopian, or at least post-apocalyptic. But in genre SF, dystoptian tales are not a new subgenre. Writers and thinkers have always been fascinated by that particular theme, from genre authors to literary ones—like Cormac McCarthy’s THE ROAD, which won a Pulitzer in 2007. 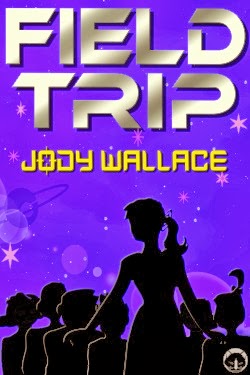 So, as far as SFR’s fandom, in the past ten years we’ve gained a lot more movies and TV to watch that compete for our free time and satisfy our interest in SF, that’s for sure. (ALMOST HUMAN, anyone???) We also have, with small press and self-publishing, seen an explosion of SFRs become available, though discoverability is one of the biggest issues. I wouldn’t say there’s been a huge increase of SFRs in mainstream press, which are arguably easier for readers to find, but alternative publishing has taken up the slack and then some.

There’s a fervent core group of SFR readers, but it sadly seems just as hard for authors to find the readers as it was for small publishers to find readers when they were just starting to figure out how to take advantage of digital texts and the internet. I do think SFR readers are more likely to be online and ebook savvy than not, so the problem is not that they aren’t capable of googling their little Malcolm Reynolds-loving hearts out searching for their favorite types of SFRs. (Or is that just me?) The problem is...something else.

Not to mention, SF is an entire genre unto itself. So SFR, which is a subgenre of romance, has subgenres of its own; just like some historical readers mostly like medievals, some SFR readers mostly like space operas and so on and so forth. There is something for everyone...but can they find it?

I have no idea. Discoverability is my nemesis.

Heather: Sci-fi romance sure seems to have a lot of mystery surrounding it. What is science fiction romance? And even if we're sure of its identity, how do we best position it so more readers can find it?

For a fan of the niche, it's kinda cool being in on its secret. But it has a lot to offer and readers like me want books like ANGELI to have a better shot at being discovered. That way, even more of us that are in on the secret can have a snuggly group hug or something.

Help us discover Jody Wallace--where can readers find you? (Except for, you know, when you're in the bathroom.)

As for my dear passengers, you can also find Jody Wallace at the various stops on her ANGELI blog tour celebration. Click here for complete details.