Here are the covers and blurbs so you can learn more: 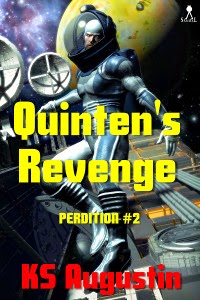 Quinten goes after the bastard who killed his wife...

After seven years of enforced isolation, Quinten Tamlan is back on his game and he wants the head of Faks Somen, now leader of the Mitres Raygun pirate cartel, on a platter. There’s only one problem: he only has one ship and two other crewmembers, and that’s not good enough to go up against a well-protected gang of cutthroats.

Knowing he needs allies, Quinten attempts to track down the old members of the ST Alliance, but they’re all dead. The only people willing to assist him are an old pirate and the son of someone he once had a lot of respect for. But the old pirate is the mother of the man who last betrayed him, and there’s something very mysterious about Delee’s son.

Meanwhile, Faks is holed up somewhere, laughing at him. But, Quinten vows, not for much longer.
This one is pure space opera and a bit of a travelogue of Republic space, with aliens, raids and a final confrontation between our hero and the man who took away the love of his life. No romance. 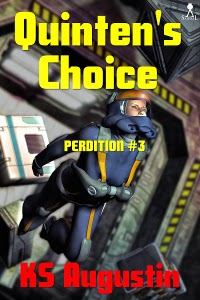 Whatever happened to Vigo Halan?

After helping them successfully free a group of Transitionals held at the secret Rannler facility, the best bounty-hunter in the galaxy suddenly disappeared. A year and a half later, Quinten still doesn’t know what happened to her.

Then he gets a message from the distant system of Telaris that raises more questions than it answers. Is it Vigo? If so, what is she doing at the far edge of Republic space? If it isn’t, who are they, what do they want and why are they using her name?

Continuing the story of Quinten Tamlan, this one isn't even available in stores yet! For fans of the best bounty hunter in Republic space. It does have a strange, twisted romance that disturbs Quinten, poor guy.