Greetings, fellow feline fanatics! Meankitty and Typing Slave (a.k.a. me, Jody Wallace) are here to present the official (and most likely only) cattification of Jenna Bennett’s sci-fi romance FORTUNE’S HERO. Because seriously, there aren’t enough cat images in the world. Truth!

FORTUNE’S MEOW by Jenna Bennett
A Kitties of Fortune Novel 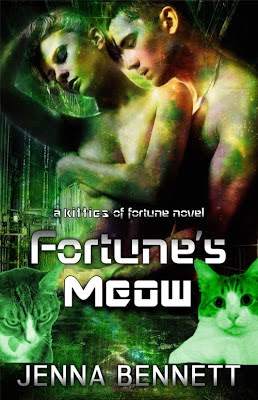 Last year, space smuggler Quinn Aslan was on top of the world. He had everything a man could want: a fast ship, a great crew, no dogs, a gorgeous Persian cat, lots of money to buy catnip, toys and crinkly sacks, and adventure and hairballs around every corner.


That all changed when he agreed to ferry a shipload of weaponized scratching posts to the heavenly planet Manxica, currently under siege by ugly, slobbering Rottweillian forces. Now he’s stuck in a prison camp on the moon Manxica-3, subjected to weekly sessions with the camp’s "drool team", and praying for a quick death before he breaks under the slobber, dog smell, carrion-rolling, crotch licking (self only), and butt sniffing and agrees he will love dogs forever and let them chase his poor Persian cat around the ship.


When the opportunity presents itself, Quinn takes a Rottweillian med tech hostage and heads into the inhospitable interior of the small moon. There, he has to keep himself and Doctor Elsa Basenji safe from the deadly flora and fauna, as well as hidden from the prison dogs searching for them, all while formulating a plan for getting his crew out of the doghouse, his ship out of the pound, and everyone out of orbit.


But when Elsa professes her love, can Quinn teach the beautiful doctor the glory of cats, or will this dog lover—-and her wiles—-convince him and his crew to at least tolerate short-haired dogs who don't bark and possibly toy-sized dogs who think they're cats anyway? Will his cat understand or will this mean an eternity on Manxica-3 when Lady Peachy Face (that's the cat) steals the ship and dumps him and the stinky dog lady?


You can visit the author's site to read the original, less interesting blurb.