Ahoy, cat lovers! Meankitty and Typing Slave (a.k.a. me, Jody Wallace) are here to regale you with the purrfect cattification of Cathy Pegau’s RULEBREAKER. Why? because lesbian cat romances are better than catnip, litter boxes, and a sunny perch all rolled into one. 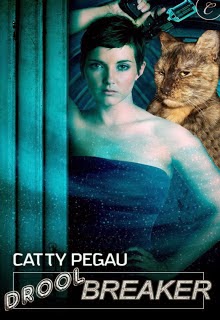 Liv Braxton's Felon Rule #1: Don't expect to be impressed with your dog. Just be happy when it doesn't poop in the floor.


Dog-and-collar thieving doesn't lend itself to sniffing the butts of the victims, and Liv hasn't met any dogs on the mining colony of Nevarro worth petting, anyway. So it's easy to follow her Rules.


Until her ex dog, Tony Toe Toe, shows up with his tongue lolling out and his stupid wet nose and asks her to do a job with him, where they'll try to infiltrate the corporate headquarters of Cats Rule and find out why cats rule.


Until Zia Kittyface, the feline CEO she's supposed to deceive, turns Liv's expectations about what cats are like upside down in a way no animal ever has.


How has she lived so long without dedicating her life to cat?? Liv doesn't know. Her world spins like a paper ball batted by a cat, and she finds herself unable to complete the doggone job. What if dogs find out why cats rule and then attempt to, I don't know, rule harder? What if dogs learn the secret? But then the vile, rabid Dobermans who've got their paws on Tony Toe Toe's leash threaten to kill her, Zia and Tony.


To make things work with Zia and escape the doggy dominion, Liv has to do more than break her Rules because the stakes are higher than just dog poop in the floor.


To see the boring, catless version of the book Rulebreaker, check it out at Carina Press. Catty Pegau's blog is here: http://www.cathypegau.blogspot.com/