Authors of SFR are always surprising us with something new. This is certainly true of Jenn Burke and Kelly Jensen. They launched a new m/m space opera series this month called Chaos Station. Not only that, they have a spiffy site with handy information about the series. 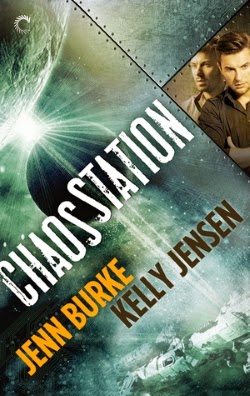 The war with the alien stin is over, but Felix Ingesson has given up on seeing his lover, Zander Anatolius, ever again. Zander’s military file is sealed tighter than an airlock. A former prisoner of war, Felix is attempting a much quieter life keeping his ship, the Chaos, aloft. He almost succeeds, until Zander walks on board and insists that Felix isn’t real.

A retired, broken super soldier, Zander is reeling from the aftereffects of his experimental training and wants nothing more than to disappear and wait for insanity to claim him. Then he sees footage of a friend and ally—a super soldier like him—murdering an entire security squad with her bare hands and a cold, dead look in her eyes. He never expected to find Felix, the man he’d thought dead for years, on the ship he hired to track her down.

Working with Felix to rescue his teammate is a dream come true…and a nightmare. Zander has no exit strategy that will leave Felix unscathed—or his own heart unbroken.

Click here to read the Chapter 1 excerpt.
Book two, LONELY SHORE, will release May 25, 2015. Enjoy the cover and blurb: 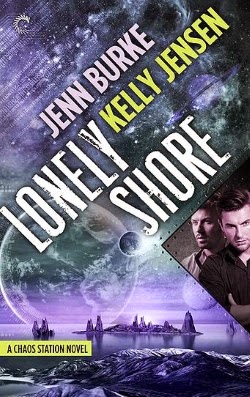 All they can do is live day to day...

Felix Ingesson has returned to his duties as the Chaos's engineer with Zander Anatolius, his ex-boyfriend-turned-broken-super-soldier, at his side. Hope means something again. But there's nothing Felix can do to battle the alien poison flowing through Zander's veins, or his imminent mental decline. With each passing day, the side effects of Zander’s experimental training are becoming more difficult to ignore.

When the ruthless Agrius Cartel seeks their revenge—including an ambush and an attempt to kidnap the Chaos’s crew—Zander is pushed over the edge. He can no longer hide his symptoms, nor does he want to. But hurting Felix when he’s not in control of himself is Zander’s worst nightmare—when it nearly happens, he agrees to seek help. Even if that means trusting the unknown.

As Zander places his life in alien hands, Felix appoints himself his lover’s keeper. And though he tries to be strong, he can’t ignore the fact that he might lose Zander…forever this time.
***

Here's the tentative release schedule for the next three books:

And now for my interview with authors Jenn Burke and Kelly Jensen!

The Galaxy Express: What was the inspiration for the series?

Jenn Burke and Kelly Jensen: Not sure if we had an inspiration for the series beyond trying to bring together a bunch of elements that we loved. Science fiction—check! Romance—check! Adventure—check! Poor, tortured white knights with tarnished armor—er, check!

TGE: Upon reading the "Extras" section on the Chaos Station site, I started thinking that STAR TREK fans might be interested in your series given the variety of alien cultures present. Tell us about the world you created. What makes it both similar to and different from other science fiction worlds?

J&K: We wanted to do something a little different and have a smaller galactic community than what you see in Star Trek and Star Wars. There are only four known races in the Chaos Station galaxy: humanity, the friendly ashushk, the warrior stin, and the omniscient Guardians. The Guardians are a complete mystery—no one knows anything about them, only that they protect the other races from themselves when necessary, hence the name “Guardians.” So that makes our galaxy kind of weird, while making it clear that even though humanity has been a part of the galactic community for about a century, they really don’t know much.

Another difference in our galaxy is that humanity has not been terribly successful at finding worlds to colonize. For extra-terrestrial living, the focus is more on space stations, which are the backbone of humanity’s expansion into space.

We have way more information on the Extras page on our site. Check it out.

TGE: What kinds of heroes can readers expect from your series?

J&K: Damaged and flawed ones. Both Felix and Zed are dealing with the aftermath of the galactic war and the scars it left on them physically as well as emotionally. They’re both good men—they’ve just kind of lost their way. Felix is prickly and keeps everyone at a distance; Zed is an idealist whose vision of right and wrong has been dimmed.

TGE: Is there an overarching plot? Should the books be read in order?

J&K: Each book has its own adventure with a definite ending, but there are plot threads that extend from book to book. Because of that, readers who read the series in order will probably have a better experience.

TGE: How would you describe the heat level in CHAOS STATION?

J&K: Hot. Sexy, but not too sexy. The romance is a huge part of the story, but so is the science fiction side of things!

TGE: Rate the action-adventure quotient of CHAOS STATION on a scale of 1-10.

J&K: Let’s say 8. There are fights and gun battles and intrigue, super soldiers with weird abilities, and kinda-sorta secret identities.

TGE: Tell us a bit about your collaborative process.

J&K: We both write one point-of-view character. Jenn writes the Zed POV scenes and Kelly writes the Felix ones. We both share Elias’s scenes (he’s the captain of the Chaos and often has a different perspective on events). Our work is stored on OneDrive, which makes collaborating so easy.

We’ve each learned to be flexible as we plot and write and revise. It’s so important to leave your ego at the door when you’re co-writing.

TGE: Without going into spoilers, is there a scene of actual chaos in the book?

J&K: Well, there’s one scene where [redacted] and [redacted] have a big [redacted]. That was pretty chaotic.