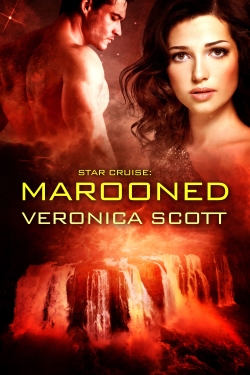 Meg Antille works long hours on the charter cruise ship Far Horizon so she can send credits home to her family. Working hard to earn a promotion to a better post (and better pay), Meg has no time for romance.

Former Special Forces soldier Red Thomsill only took the berth on the Far Horizon in hopes of getting to know Meg better, but so far she’s kept him at a polite distance. A scheduled stopover on the idyllic beach of a nature preserve planet may be his last chance to impress the girl.

But when one of the passengers is attacked by a wild animal it becomes clear that conditions on the lushly forested Dantaralon aren’t as advertised – the ranger station is deserted, the defensive perimeter is down…and then the Far Horizon’s shuttle abruptly leaves without any of them.

Marooned on the dangerous outback world, romance is the least of their concerns, and yet Meg and Red cannot help being drawn to each other once they see how well they work together. But can they survive long enough to see their romance through? Or will the wild alien planet defeat them, ending their romance and their lives before anything can really begin?
***
There's more! Enjoy an excerpt from the first chapter:

The shuttle broke out of the cloud layer and swooped over a breathtaking vista of pink and green foliage, practically glowing in the vid screens. The rainforest spread across the planet as far as the scanners could detect. Clouds of multicolored birds flew above the treetops, drawing the eye to their wheeling movement across the turquoise sky. Here and there, rainbows curved from puffy clouds, where seasonal showers had added moisture to the air. As Meg walked through the cabin, offering refreshments to their guests, she attempted to direct their attention to the view of the planet. Anchored by trees soaring hundreds of feet from the surface, the foliage and avian wildlife were something never seen on the highly civilized worlds where these people lived and worked. Although they’d paid a staggering amount of credits to be taken to this site, neither the primary guest, nor the people he’d brought, seemed to care. Drinking, playing cards, and indulging in sexual innuendo took all their attention.
Not much changed from cruise to cruise with the rich and powerful, despite Meg’s best efforts to share the simple pleasure she found in the surroundings at each port of call.
At the rear of the main cabin, she found at least one passenger watching the screen above her seat. “How are you doing?”
Callina Finchon Bettis took her attention from the view for a moment, giving Meg a little wave. “Fine, smooth ride so far. When can we see the Falls?”
“Soon. The pilot likes to swoop in from the front, as if we’re going to splash right through the water.” Meg leaned closer. “But don’t worry, he veers to the side at the last moment.” She placed an iced fruit drink at the woman’s elbow. “Maybe five more minutes.”
As Callina murmured thanks, Meg retreated to the galley, where she found the only other crew member besides the pilot.
“Passengers all happy now?” he asked, raising one eyebrow.
“I don’t think this bunch is ever happy,” she said. “You’ll find generational billionaires rarely are, when you’ve done more of these private charters. But at least I’ve supplied them with feelgoods.” She slid the drink tray into the chiller. “Did you need something?”
Simon ‘Red’ Thomsill held up his hands in mock surrender. “I know, this is your territory and I shouldn’t be here, Guild rules. But the pilot wanted coffee.”
Hands on her hips, Meg smothered an impatient sigh. “First of all, he should have buzzed me for it, and secondly, he knows perfectly well only guests are entitled to genuine Terran coffee.”
“Wow, are you this dedicated to rules all the time?” He leaned against the emergency portal and studied her, one eyebrow raised as if he might be trying to tease her.
Two internal call signals pinged, one right after the other. From the cabin, she heard female passengers swearing at each other. She straightened her tunic as if gathering determination, and headed out to mediate whatever the problem was now. “No tip is going to be big enough,” she said under her breath. Pausing on the threshold, she glanced at Red. “I’m responsible for the coffee inventory on this shuttle, and it comes out of my pay if the weight is short.”
“I didn’t know.”
“Yeah, there’s a lot you don’t know, rookie. But Drewson does. The synth stuff crew members drink is over there.” Pointing at the proper carafe, she left the galley as more voices joined the clamor in the passenger section.
One of the scantily clad women had spilled her beverage all over another’s ample cleavage, staining both the woman’s skin and skimpy bikini top. The agressor was pulling the other’s hair and screaming insults, while her victim tried to land some blows anywhere she could reach. The primary guest laughed and made bets with the two men seated next to him, wagering on which woman would prevail.
Meg waded into the fray. “Ladies, please, we’re about to land. You’re required to be in your seats before we can make our final approach.” She caught the second woman’s elbow. Modulating her voice to a soothing tone, Meg said, “I can remove the stain, Ma’am, no problem.”
The women paused in their altercation, gazing beyond her with wide eyes. A moment later, both fluffed their hair.
Without turning, Meg knew Red had followed her. She’d observed his effect on females more than once already on this cruise. Something about his 6’4” height, the heavily muscled biceps, the chiseled features, the sparkling green eyes…Well, okay, to be honest, he had the same effect on her, but she wasn’t about to let him know. Been there, done that with a tempting crewman or two on her early tours. Crew romances were nothing but trouble when the first attraction inevitably flamed out.
Although Red was more tempting than anyone she’d met in a long time.

Glad you could join me for this exclusive cover reveal of Veronica Scott's STAR CRUISE: MAROONED! For more information, visit the author's web site and follow her on Twitter (vscotttheauthor).