The End of Shomi and Other News

"What’s happening with Shomi?" Dorchester editor Leah Hultenschmidt answers the question. Basically, the Shomi line—the one dedicated to action adventure/science fiction romance books--has been dissolved. SFR titles will be folded into the Love Spell line, or positioned as fantasy/urban fantasy if the content swings that way.

Three of the titles look interesting for SFR fans: TEKGRRL by A.J. Menden (June 2009), FALLEN ROGUE by Amy Rench (December 2009), and TSUNAMI BLUE by Gayle Ann Williams (April 2010) (Is this WATERWORLD—the romance? But, I hope, much better than the movie. Uh…which I actually kinda liked.) 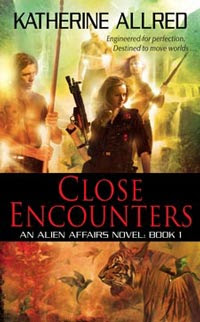 Katherine Allred’s CLOSE ENCOUNTERS is out this month! The author also revealed the (tentative) title for her next Alien Affairs novel: CLOSE CONTACT.

Here’s an oldie-but-goodie: Interview with Eve Kenin, courtesy of Tez Miller. Lots of great stuff about the author’s book DRIVEN.

At Alien Romances, Rowena Cherry takes worldbuilding to a new level with Have mop, will travel. Dirty Jobs of the Past and Future.

Don’t miss the next exciting chapter of Jess Granger’s Ethel the Space Pirate!

Catch a great review of Linnea Sinclair’s HOPE’S FOLLY at Enduring Romance, and chase it with a profile of same at Kathy’s Review Corner.

Cathy Pegau breaks down “the typical Sci Fi Channel original movie formula”: Usually one or more of the characters does something completely stupid, jeopardizing themselves and/or the rest of the group. This ticks me off and they are the first ones I like to see eaten.

Genre Bender is a “new blog by and for cross-genre unpublished writers.” One to watch, indeed! [Thanks to LadyBriony’s Weblog for the link. Val, who runs the joint, promises she’s going to “to post about the obsession with futuristic swear words in SF romance” at Genre Bender soon. Let ‘er rip, Val!]

Agent Z, Intergalactic Spy Extraordinaire, sent me this intriguing link through the comm: Space Pirates of the Black Quarter [Warning: Colorful language ahead]. While not SFR, I thought some of you might be in the mood for something completely different. SPBQ is an online comic, and Agent Z tipped me off about the inclusion of a “she-pirate!”

So on that swashbuckling note….