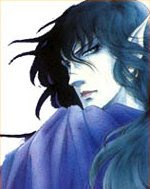 Horror manga BRIDE OF DEIMOS is probably the “safest” example I can cite here, short of you all thinking I’m certifiable. The cutesy, willowy illustrations that grace the pages of DEIMOS belie a sinister underbelly.

I recently finished THE COLD MINDS by Kristin Landon. It’s the second of a trilogy that began with THE HIDDEN WORLDS and will conclude with THE DARK REACHES (June 2009). What struck me about the second book are the moments involving imagery of singularly dark, unsettling concepts, and how refreshing I found this discovery, even as those scenes unfolded right alongside the romance. And the romance ain’t no walk in the park, either, and I mean that as a compliment.

Paranormal romances (and by that I mean those drawing upon the horror genre—not fantasy), while not uniform in nature, nevertheless gained a reputation for offering that combination of Alpha heroes and/or Buffy clones, graphic sex, and some horror element thrown into the mix. Horror elements, it bears emphasizing, that have been rarely scary or sinister, at least for me. Which is disappointing since there was so much potential to explore.

Oddly enough, even though paranormal romance has half of its roots in the horror genre, I think science fiction romance has more potential to conquer the frontier of dark plots and disquieting concepts/themes. Not necessarily of a sexual nature, although it could be that, but answers to the “What if…?” inquiry.

In other words, answers that will give readers psychological whiplash.

When a plot heads into dark territory, I enjoy the restorative balm of a blossoming romance. But what if the plot is dark and the romance is rife with conflict, desperation, and bleakness along the way? Count me in, as long as there is a believable Happily Ever After. I may not want to read five of these in a row, but I’d at least want the choice.

Here’s where I think effective emotional and/or sexual tension plays a key role: If the romance is fundamentally sound and effectively portrayed, an author can take it into anguish-filled depths beyond measure, and I will follow. It can echo the tone of the external plot or serve as a hopeful counterpoint.

What about you? Are you ever in the mood for a really dark romance? In particular, how dark do you want science fiction romance to go? What do you consider to be some of the darker SFR tales currently available?